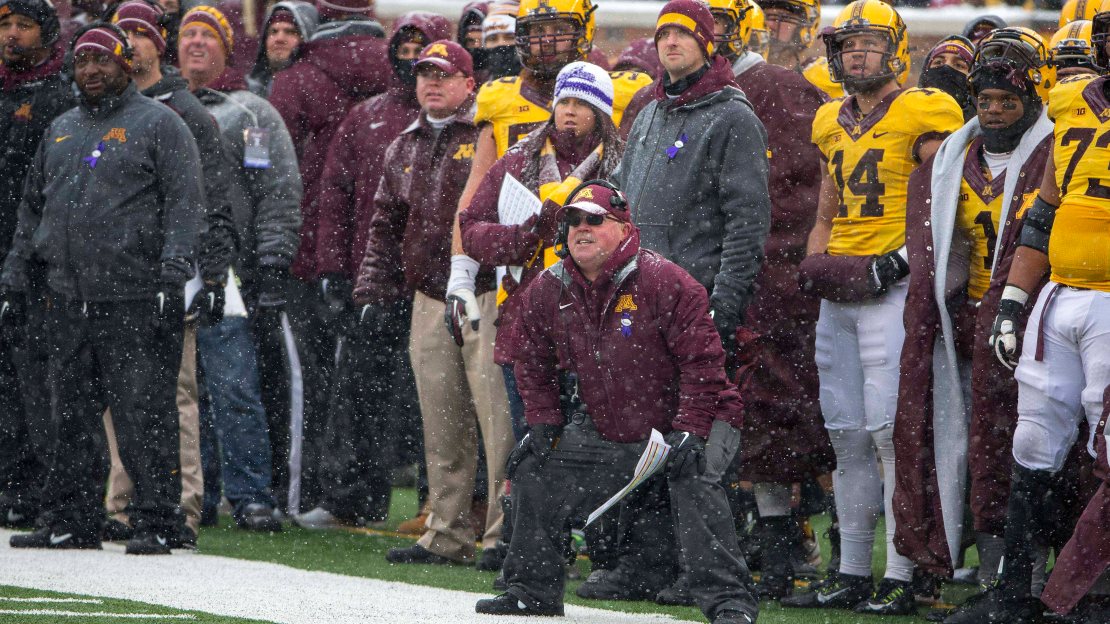 You have questions, and I have answers in my latest Big Ten Mailbag. Among the most nagging queries: Will Ohio State make it to the playoffs? And who is the Big Ten Coach of the Year?

I don?t know why not. He has a good thing brewing in the Twin Cities with one of the fastest rising programs in the nation. Things only figure to get better. But you have to think some schools may come calling on Kill. He?s one of the best in the business. Maybe Kill can use interest from other schools to improve his salary and get much-needed enhancements to facilities. Minnesota needs to invest in its football infrastructure.

What is wrong with Michigan? – Tom Waring

How much time do you have? Honestly, the big issues for the Wolverines are on the offensive side of the ball. Brady Hoke never has started a quarterback he recruited in his four seasons. I think that was a mistake, as he never really got his offensive style in place from the start. The line play also has been an issue, getting seemingly worse each season. And the play of the running backs has been subpar in recent years, too. The defense? Coordinator Greg Mattison had his unit playing very well this season. Michigan is No. 4 in scoring defense (22.4 ppg) and No. 4 in total defense (311.3 ypg). Not bad.

Will Ohio State make the playoffs if it wins out? – Larry Roehrkasse

It could. But other things remain out of the control of the Buckeyes. Florida State, Alabama and Oregon all are sitting pretty. If they win out, they are locks to be in the playoff. The fourth spot figures to come down to TCU or Baylor. So, if there is attrition among that group, Ohio State could move into the playoff. FSU plays Georgia Tech in the ACC title game; Oregon plays Arizona in the Pac-12 title game; Alabama plays Missouri in the SEC title game; Ohio State plays Wisconsin in the Big Ten title game. TCU plays host to Iowa State. Baylor plays host to Kansas State.

Do you think Michigan State will have a chance to play in the national championship? – Chris Link

No. With two losses, the Spartans are too far behind the eight-ball to reach the playoffs-let alone the title game. Who has MSU beaten? Are they any quality victories? The team essentially had a two-game schedule and flopped at Oregon and vs. Ohio State. Bottom line: The Spartans? resume just doesn?t stack up. But I do think Michigan State will play in a New Year?s Day Bowl.

What are the chances that Nathan Gerry makes first- or second-team All B1G? The kid is a stud. – Dustin

He has played better and better as the season has progressed. In fact, he has the look of a future pro, showing speed, coverage ability and the ability to play the run. I doubt he will be a first-team All-Big Ten pick this season. Guys like Michigan State?s Kurtis Drummond and Trae Waynes, Minnesota?s Brien Boddy-Calhoun, Maryland?s Will Likely and Wisconsin?s Michael Caputo, among others, look like more likely first-teamers, to me. But I think he?ll be second team, and he has a bright future.

You make some good points. Here are mine: You have to look at how a team is playing now and who it has beaten. When you start comparing one-loss teams in late November, they all obviously are playing well. Then, look at the quality of their loss. And, in every instance, Ohio State has the worse loss of any playoff contender. How can that be ignored? Plus, the loss of QB J.T. Barrett to a season-ending broken ankle figures to have an impact on the committee and how it views Ohio State. This isn?t the same quality team without Barrett.

Do you think the parity in the Big Ten hurts its power ranking in the nation? – Bknutson

Parity? No. What hurts the Big Ten is not having enough good teams. Period. Ohio State and Michigan State are the lone elite teams this season. Wisconsin is close. After that? The Big Ten has some nice teams-but no national title contenders in teams like Minnesota and Nebraska. The Big Ten needs Michigan, Ohio State, Penn State and Nebraska to be rolling for it to be a super strong conference.

Do you think the Badgers will ever play for a national championship with just a ground game and big offensive line? – Ted

I have my doubts. Yes, a team can go a long way with a strong rushing attack and good defense. But you also need a solid-not necessarily a superstar–quarterback. And I?m not sold on Joel Stave and Tanner McEvoy. But, I will say Stave has looked better and better as the season has gone a long and he got over his case of the ?yips.? Still, there comes a time in all big games when a QB has to make some big passes. And I?m not sure if the Badgers have that type of signal-caller right now.

Is there any coach would be more deserving for Big Ten coach of the year than Jerry Kill? Mind you, I live in SE Iowa and I bleed black and gold, attended Iowa, and have been a season ticket-holder for 30 years. I realize how crazy the idea may sound, coming from a Hawk fan. Those of us who live in the southern part of Iowa never really had the bitter rivalry feel that many in the northern part of our state have held onto for years and years against the Gophers. After our embarrassment earlier this month vs. Minnesota, I admit it could easily regenerate. Kill deserves his just due. – Lucas

You won?t get much of an argument from me. I think Kill is one of the best going. Few coaches get more out of their talent. Factor in sub-par facilities, and what Kill has done in four scant years is impressive. Still, you could make cases to give the honor to Wisconsin?s Gary Andersen and Ohio State?s Urban Meyer. But Kill may be the sentimental fav.