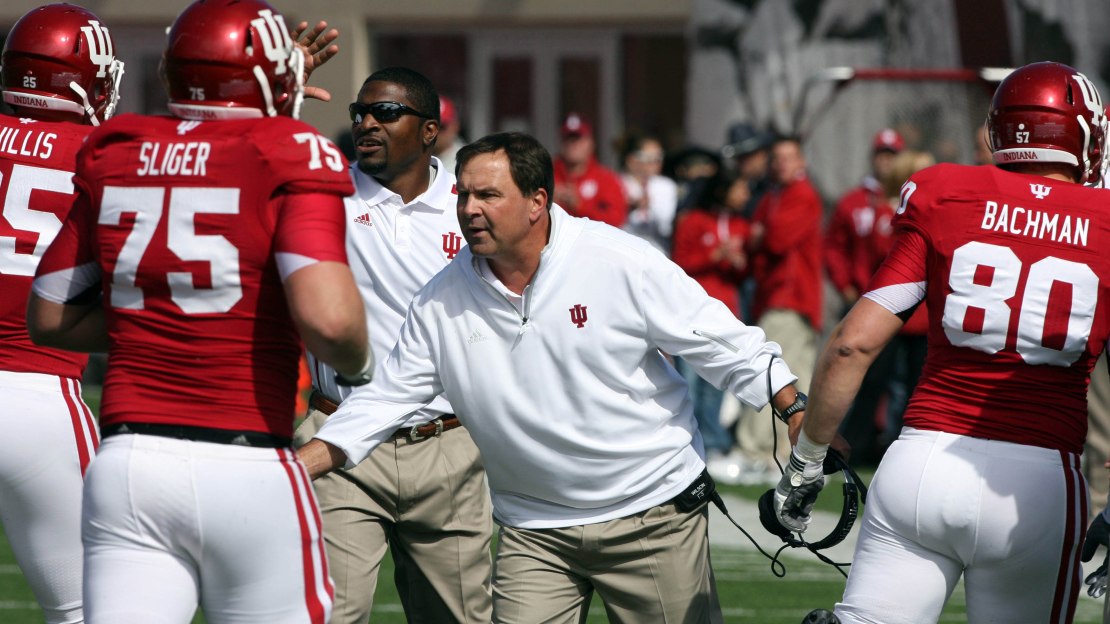 Big reports at Illinois and Indiana, where Tim Beckman and Kevin Wilson both will be back-Beckman for his fourth season and Wilson for his fifth. Good to hear. Beckman rallied the Fighting Illini to bowl eligibility. Wilson has the Hoosiers on the rise and may have stamped a postseason ticket if not for an injury to quarterback Nate Sudfeld. IU A.D. Fred Glass has thrown his support behind Wilson.

Without a doubt, this wasn?t an easy sophomore season for Penn State?s Christian Hackenberg. He has tossed 15 interceptions and been sacked over 40 times. But he?s not gonna blame the line. In fact, he says the unit has worked hard to get better. Check out Hackenberg in this video.

Rutgers? 41-38 win at Maryland was sweet on many levels. But it was especially sweet for ex-Terps coach and current Rutgers offensive coordinator Ralph Friedgen.

Steve Politi of NJ.com notes that getting revenge for Friedgen certainly was a nice bonus.

?Well, obviously it's a special win for me, but I think it's an even better win for our program,? Friedgen said. ?We win the bowl game, and we have a chance to have eight wins. The whole thing about Maryland, to me it's ancient history.?

I thought Iowa was good enough to win the West. Boy, was I wrong. Barfknecht agrees, saying there is now way this should have been a 7-5 team. The Hawkeyes had the Outland Trophy favorite in offensive tackle Brandon Scherff, a veteran quarterback, healthy running backs for a change, good playmaking ability on defense and a home friendly schedule.

Great win for Illinois at Northwestern which made the Illini bowl eligible. Saturday?s win unleashed a scene many did not see coming after a loss to Iowa two weeks ago.

?After the Iowa loss,? Mike Dudek said, ?morale was pretty down.?

The Illini needed to win their final two games to become bowl eligible. They did. And did so in their most complete game this season.

?This means everything,? right guard Alex Hill said. ?This is what we come to play college football for is to get an opportunity to go to a bowl game.?

Nick Baumgardner of Mlive.com thinks the Ohio State loss fits Brady Hoke?s Michigan?s tenure: promising start and steady fade. It was a perfect summation of his career to date.

Baumgardner notes that Hoke went 11-2 in his 2011 debut. He beat Ohio State. He won the Sugar Bowl. He said all the right things. For the first quarter or so of his tenure, he had you believing. Sort of like Saturday afternoon in Columbus. For the first quarter or so, you were hooked. Michigan entered Ohio Stadium buried in turmoil, given zero chance by anyone to have a shot in this game, and somehow found itself up 14-7 about 23 minutes in. But then, just like they have in a big-picture sense during Hoke's tenure at Michigan, things slowly but surely fizzled.

In many ways, Saturday was Brady Hoke's tenure at Michigan.

On the subject of the Spartans, Mike Griffith of Mlive.com thinks MSU wrapped up a New Year Day?s Bowl with the win at PSU. Check out the video.

Good read, as usual, from Gregg Doyel of IndyStar.com. Seems another lackluster Old Oaken Bucket game sent him to the stands.

Yes, it wasn?t pretty football. But it was a nice win for the Hoosiers, who have won the Bucket for back-to-back seasons for the first time since 1993-94. Good for Kevin Wilson and Hoosiers, who have something to build on. Purdue? I have no idea what to make of a program with one Big Ten win in two years under Darrell Hazell. Has progress been made?