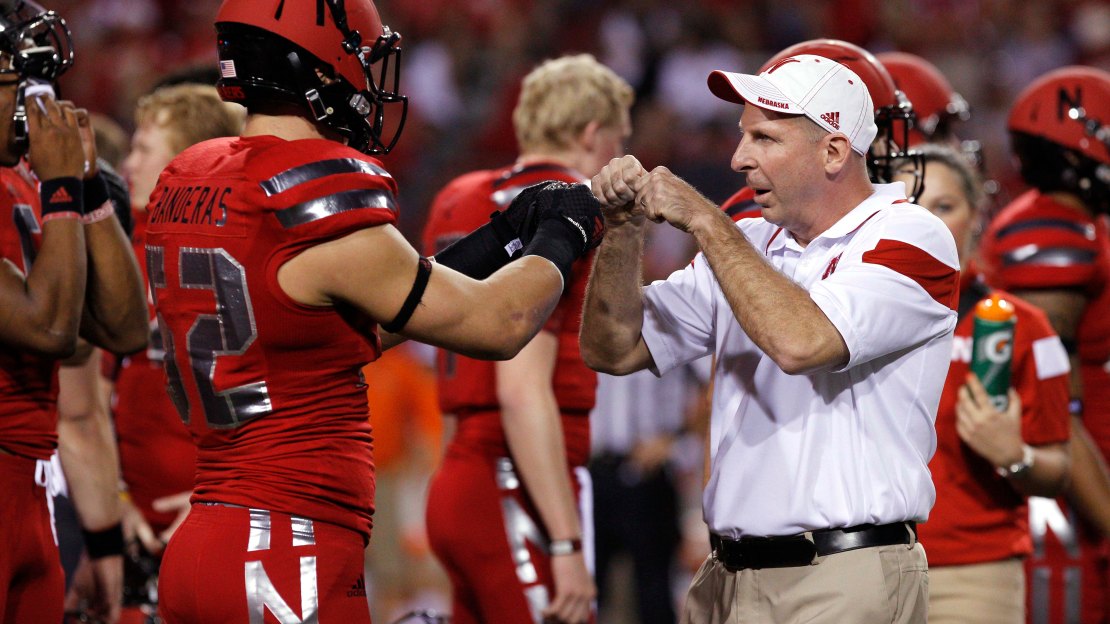 Nebraska has fired football coach Bo Pelini after seven seasons and a 67-27 record, including a 22-10 Big Ten clip.

The Huskers finished the 2014 season 9-3, the seventh straight year Pelini won at least nine games, and appear to be destined for a quality bowl.

Wherever they end up playing in the postseason, the Huskers will be without their head coach. Assistant Barney Cotton will serve as the interim coach.

Get Tom's Dienhart's reaction to the firing. And here's the AP story.

This is how Nebraska players learned about the firing Sunday morning:

A lot to take in with one email. pic.twitter.com/hQ6KYUA4Qk

Biggest mistake you ever made…. Bo was the best coach I've ever had and I'll always appreciate the things you taught me.

He's the reason we came here

That man has always had our backs and did anything he could do to help us. If it wasn't for Bo a lot of us wouldn't even be here.

Stupidest goddamn decision I've ever seen, heard, or been a part of.

Think of a non family member in your life u would do anything for. Now imagine having that person ripped out of your life. Thats how we feel

That's the worse way to wake up in the morning. Smh that's some Bull real talk man. I guess stability doesn't mean anything

Words can't explain how much all the players appreciate what you did for us. Love you Coach Bo and thanks for everything.

The leadership issues at the University of Nebraska extend above the Head Football Coach's office.

I feel terrible for Bo and his staff! They put their hearts and souls into the program! I will be forever thankful for them! It's a shame!

Will always be thankful for Coach Pelini! Really helped mold me into the player I am today. Can't thank him enough! @Huskers

I just hope the next head man that comes in, cares not only about winning but the development of men. Thank you Coach Bo for everything!!

Nebraska doesn't realize what they just did. Unbelievable

Bo was the best coach I have ever had the pleasure to play under. Highest character, loyal, I could make a freakin list…..

Absolutely unbelievable and people are mad of the coaching options ??! Who do you think you're gonna get ?! Tell me right the hell now!

I don't see how this decision will help the program. If anything, it'll make it worst honestly.

They fired @BoPelini SMH!!! Big mistake not sure if I wanna watch the bowl game now I'm sick!!! But whatever man I'll support the players

Smh terrible decision just awful smh 9 wins gets you fired? Thank you coach Bo for everything u did for me & this team over ur tenure

Four years ago when coach Bo came to my house for my official visit, never imagine I'll play for anyone else. Love & appreciate that man.

Wishing the best for my coach moving forward. He'll land on his feet because he's a great coach and an even better man.

Thanks you @BoPelini for everything! Can't believe you just got fired, this one hearts a lot because we Family #Bo4Life

Gonna be really hard to find another coach who did as much as @BoPelini did for the program and his players. Thanks for everything Bo.

Man I just woke up to that…really? Coach Bo was a great coach and even better man

Thank you coach Bo for everything! I'm honestly pissed!

Coach Bo has done volumes for myself and my family during my time at the university. Thank you Coach, for the opportunity to grow here.

THAT'S IT I QUIT

And now from the media:

It didn't start with Pelini, but given Nebraska's history, unacceptable the program has not won a conference title since 1999.

Nebraska has to hire a guy who can win without five-stars. Because those guys tend to stick close to home. Got to be a great evaluator.

Pelini?s firing inevitably will be compared to Solich?s, which set Nebraska back. But this is program that demands excellence. Didn?t get it

A new era for Nebraska football begins. Thought Pelini might have survived with the Iowa win

If I'm Nebraska, I do whatever I can to lure Jerry Kill away from Minnesota, which won't be easy.

Disturbing when a guy like @BoPelini goes seven straight years with 9 or more wins and gets fired. Gotta be something more to the story.

The national reaction to Bo Pelini being fired is interesting. One thing is for certain… It's going to be a hell of a search.

You know what would get good skill kids to go play in Lincoln in tough recruiting environment? Oregon's offense

Bo Pelini mostly can blame himself for being fired, but I doubt his successor will win at least 9 games in 7 consecutive seasons as he did.

I'm shocked that people are shocked about the Bo Pelini news. He's a defensive coach whose defenses stunk. 9-3 in weak B1G not impressive.

I'm mildly surprised by Pelini's firing at Nebraska. Too much success to make it obvious decision. Not enough to keep him safe.

The Bo Pelini news is a stunner. No pressure, next coach. Just do better than a .713 winning percentage and your job should be safe.

No surprise Nebraska fired Bo Pelini. With his record he will probably get a new job soon

Bo Pelini out at Nebraska. Quite a shocker. Best choice would be Oregon OC, former Cornhusker QB Scott Frost.

Might want to stick to head coaching. But Bo Pelini immediately becomes a very attractive candidate as a defensive coordinator.

So the one time Bo Pelini DOESN'T lose four games, he gets fired. (Granted, it could have happened in a bowl game).

Bo Pelini won 66 games over the past 7 seasons at Nebraska, including 3 bowl games. He was fired this morning.

Think about this… Only #Nebraska, Alabama and Oregon have won 9+ games every season since 2008 (Bo Pelini-era)