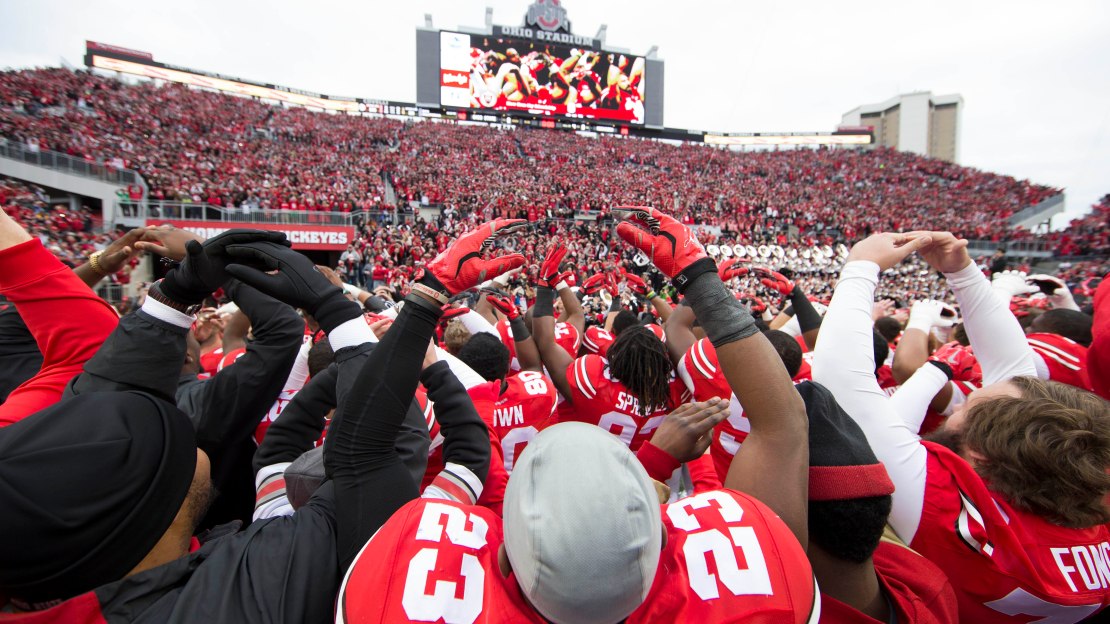 Rivalry week didn?t disappoint, with the Minnesota at Wisconsin game being the headliner.

The win by the Badgers gave them Paul Bunyan?s Axe and a trip to the Big Ten championship game to play Ohio State.

Biggest surprise: Let?s hear it for Rutgers, which rallied from a 35-10 deficit in the second quarter to win 41-38 at Maryland. The Scarlet Knights won two of their last three after a crushing three-game slide to finish 7-5, which looks a lot better than 6-6. The only bad loss? At home to Penn State, 13-10. Bravo, Kyle Flood!

Biggest disappointment: It was all right there for the Wildcats-beat Illinois in Evanston and go to a bowl. Alas, NU got whipped, 47-33. Yes, it hurt the Wildcats to have backup quarterback Zack Oliver-who had five turnovers–playing for injured Trevor Siemian. Still, the NU defense got ripped for 291 yards rushing and 438 overall. The Wildcats-who had won two in a row entering this game–will be bowl-less for a second season in a row.

Play this again: The Cornhuskers? 37-34 overtime win at Iowa was impressive. Things started slowly with a lethargic first half that featured six turnovers and struggling offenses. But the game came to life in the second half, as Nebraska rallied from a 24-7 hole midway through the third quarter to kick a game-tying field goal with eight seconds left and then win in overtime. That tied the school record for largest comeback on the road.

Never play this again: Indiana?s 23-16 win vs. Purdue was, well, ugly. Both offenses stumbled and bumbled most of the game. But IU had something Purdue didn?t: Tevin Coleman, as Indiana got its first Big Ten win. And QB Zander Diamont-a true freshman-played much better than Austin Appleby, who tossed three picks and hit no passes of consequence. Without Akeem Hunt, who had 171 yards rushing, the Boilermaker offense would have done nothing.

Wisconsin. The Badgers have won seven in a row since a confounding 20-14 loss at Northwestern. The victory vs. Minnesota pushes the Badgers into the Big Ten title game for the third time in four seasons.

Illinois. The Illini needed to win their last two games to get bowl eligible. And, they delivered. The 47-33 win at Northwestern followed a 16-14 home win vs. Penn State. The victory in Evanston made Illinois bowl eligible for the first time since 2011.

Nebraska. The Cornhuskers ended a two-game losing skid with an overtime victory at Iowa. At 9-3, the Cornhuskers should be pointed toward a nice bowl. This is the seventh season in a row Bo Pelini has had nine wins.

Michigan State. The Spartans have won three in a row since that tough home loss to Ohio State. The only other loss was at Oregon. This team is 10-2 overall and 7-1 in the Big Ten and seems headed to a New Year?s Day Bowl.

Purdue. The Boilermakers closed the season with six losses in a row, as they lost the Old Oaken Bucket for a second season in a row with four turnovers. The Boilermakers failed to score over 16 points in any of their last four games. If you are scoring at home, Darrell Hazell is 4-20 overall and 1-15 in the Big Ten.

Michigan. The loss at Ohio State ended bowl hopes for the Wolverines. Michigan is 6-10 in its last 16 Big Ten games. And it will miss the postseason for the first time since enduring a two-year drought from 2008-09.

Northwestern. The Wildcats had won two in a row and sat on the precipice of bowl eligibility. But they lost at home to Illinois, meaning NU will miss a bowl for a second season in a row.

Penn State. Remember when the Nittany Lions opened 4-0? Seems like eons ago. Since then, Penn State has gone 2-6. And the wins were at Indiana and vs. Temple. But, hey, PSU is going bowling.

Jeremy Langford, RB, Michigan State. The constant for the Spartans, Langford ran 30 times for 118 yards and two scores to help MSU grind down Penn State. It was his ninth 100-yard rushing effort of the season and his sixth straight game with multiple touchdowns. Penn State was leading the nation and the Big Ten in rushing defense (81.7 yards per game) and was second in the conference in total defense (267.2).

Melvin Gordon, RB, Wisconsin. He ran 29 times for 151 yards and a TD and also caught a TD pass. He has rushed for 100 yards in all but one game this season and set a Big Ten single-season record with 2,260, passing Ron Dayne. He needs 369 yards the next two games to break Barry Sanders? FBS single-season record of 2,628 set in 1988, averaging 184.5 yards rushing.

J.T. Barrett, QB, Ohio State. He completed 13-of-21 passes for 176 yards with a touchdown and ran 15 times for 89 yards and two scores before leaving the game in the fourth quarter with a season-ending broken ankle. He set the Big Ten season record for touchdowns responsible for with 43.

Nate Gerry, DB, Nebraska. The reliable Husker tallied a game-high 15 tackles, including 2.5 for a loss, and added an interception.

Gary Nova, QB, Rutgers. He completed 28-of-42 passes for 347 yards and four touchdowns in a huge comeback win at Maryland to make the Scarlet Knights 7-5.

Reilly O'Toole, QB, Illinois. O?Toole completed 17-of-28 passes for 147 yards and three touchdowns, while also adding a game-high 147 yards on the ground, as the Fighting Illini beat their rivals to become bowl eligible.

Darron Lee, LB, Ohio State. Lee tallied nine tackles, including two for a loss, and a sack, in addition to returning a fumble for a touchdown to seal Ohio State's win over Michigan.

4, touchdown passes for Nebraska?s Tommy Armstrong. And he did it with just 12 completions on 27 attempts with two interceptions. He finished with 202 yards in the win at Iowa.

118, yards rushing for Minnesota?s David Cobb, whose status was iffy entering the game after suffering a hamstring injury last week. He ran 25 times with a TD.

272, yards allowed by Wisconsin vs. Minnesota.

121, yards rushing for Ohio State?s Ezekiel Elliott on 17 carries with two scores. It was his sixth 100-yard rushing game of the season.

44.7, yards averaged on three punt returns by Nebraska?s De?Mornay Pierson-El. He raced 80 yards for a touchdown with one, his third punt return for a score this season for the freshman.

3, 100-yard receivers for Rutgers. Janarion Grant had eight catches for 105 yards; Leonte Carroo had six for 104 with two TDs; Andre Patton had 8 for 101 and two TDs. Grant also ran back six kickoffs for 188 yards.

10, wins for Michigan State. It?s the fourth time in five years that the Spartans have won double-digit games. The Spartans have four of their six 10-plus win seasons in school history under Mark Dantonio.

233, yards passing for Michigan?s Devin Gardner, who completed 22-of-32 passes with two touchdowns and a pick in one of his better efforts of the season.

15, interceptions for Penn State QB Christian Hackenberg, who also was sacked over 40 times in a rough season.

130, yards rushing for Indiana?s Tevin Coleman. That pushed him over 2,000 for the season. That helped push the Hoosiers past Purdue to win the Old Oaken Bucket for the second straight year and give IU its first Big Ten win of the season. Indiana had not won the Bucket in consecutive seasons since 1993-94. Coleman is the 18th player in Football Bowl Subdivision history to top the 2,000-yard mark. He finished the season with 2,036 yards.

130, yards rushing for Northwestern freshman Justin Jackson on 24 carries with two TDs. He eclipsed the 100-yard rushing mark in six of the last eight games.

7, catches for Illinois freshman Mike Dudek for 63 yards and a TD as he continues a sensational freshman season.