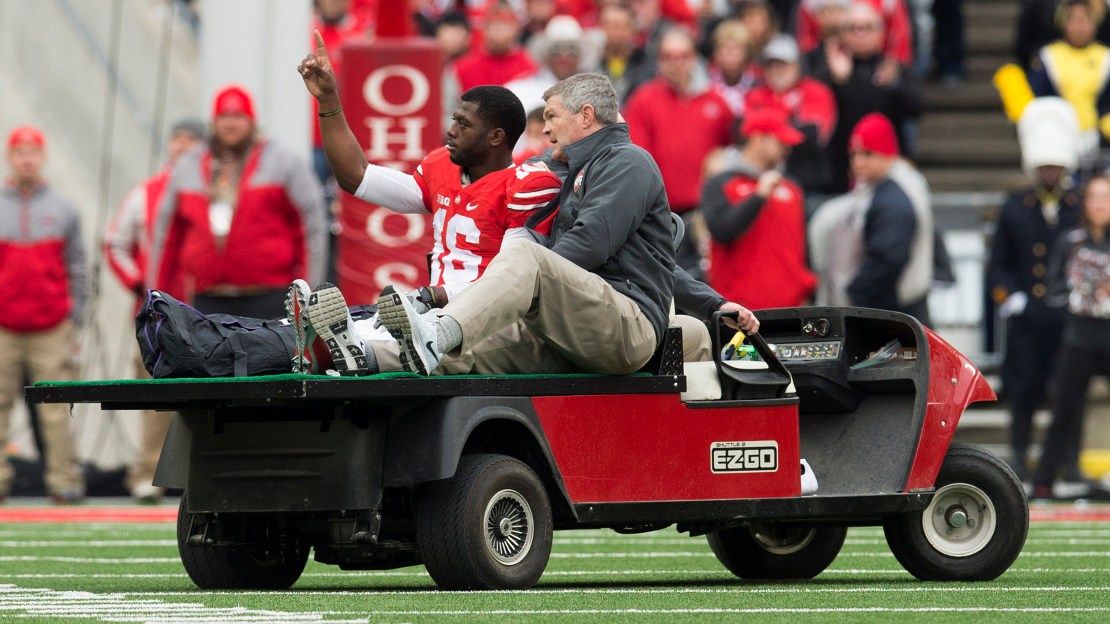 Ohio State redshirt freshman quarterback J.T. Barrett will miss the rest of the season after suffering a right ankle fracture in Saturday's 42-28 rivalry win vs. Michigan. He will undergo surgery Sunday at the Ohio State University Medical Center.

The injury occurred on the first play of the fourth quarter, with Ohio State leading 28-21. Barrett was tackled by a trio of Wolverines, and his body bent in an awkward position.

The training staff put an air cast on Barrett's leg and he was taken off the field on a cart.

Read the official release about Barrett's status below.

Ohio State freshman quarterback J.T. Barrett suffered a right ankle fracture in the second half of the Buckeyes? 42-28 victory over Michigan Saturday at Ohio Stadium. He is scheduled to have surgery Sunday at the Ohio State University Medical Center, and he will miss the remainder of the season.

Barrett, 11-1 as Ohio State?s starting quarterback after taking over the starting position just 12 days before the opening game of the season, had rushed for 89 yards and two touchdowns and passed for 176 yards and another score against the Wolverines. Ohio State was leading 28-21 when Barrett was injured. OSU scored the next two touchdowns of the game for a game-clinching 42-21 lead.

Barrett finishes his campaign with school record totals of 3,772 total yards and 45 touchdowns responsible for. His touchdowns total is a Big Ten record. He passed for 2,834 yards and a school-record 34 touchdowns and he rushed for an additional 938 yards and 11 touchdowns.