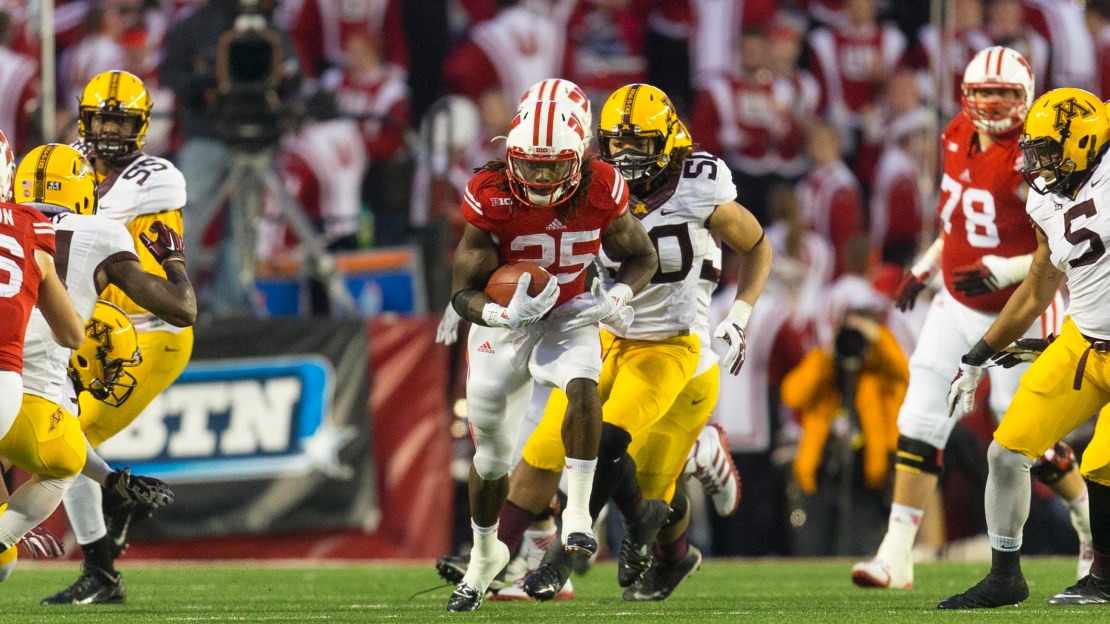 The final week of the 2014 Big Ten regular season is in the books. Big Ten fans were treated to an outstanding week of football, highlighted by Wisconsin's 34-24 victory over Minnesota, which punched the Badgers' ticket to the Big Ten Championship game.

In addition to several outstanding games, there were also plenty of exceptional individual performances.

Gary Nova, QB, Rutgers. Nova had a memorable day in Rutgers' incredible 41-38 comeback victory over Maryland. The Scarlet Knights' senior QB hit 28-of-42 passes for 347 yards and four touchdowns in the win. This marked the third time this season Nova has passed for four touchdown passes in a single game.

Melvin Gordon, RB, Wisconsin. Gordon shined bright once again on the big stage. The Badgers' do-it-all back rushed for 151 yards and totaled two touchdowns (one rush, one reception) as the Badgers' stamped their ticket to the Big Ten championship game with a 34-24 victory over Minnesota. Gordon has now totaled 2,260 rushing yards this season, which broke the Big Ten single-season record. What a special talent.

J.T. Barrett, QB, Ohio State. Barrett's outstanding day was cut short when he went down with a season-ending broken ankle on the first play of the fourth quarter. Before that, the Buckeyes' redshirt freshman quarterback was phenomenal, passing for 170 yards and a touchdown, while adding 85 yards and two scores on the ground. Barrett broke Drew Brees' record for touchdowns accounted for in a season on Ohio State's first score, a TD pass to Nick Vannett.

Reilly O'Toole, QB, Illinois. Illinois coach Tim Beckman made the decision to start O'Toole at quarterback against Northwestern, and his senior signal-caller delivered in a huge way. O'Toole completed 17-of-28 passes for 147 yards and three touchdowns, while also adding 147 yards on the ground as the Fighting Illini earned their sixth victory of the season, making them bowl eligible for the first time since 2011.

Nate Gerry, DB, Nebraska. Gerry was outstanding in Nebraska's 37-34 overtime win over Iowa on Friday. The Huskers' sophomore DB recorded a game-high 15 tackles, three of which were for a loss, and added an interception in the victory.

Ezekiel Elliott, RB, Ohio State. This guy was near-unstoppable in Ohio State's 42-28 win over Michigan. Elliott carried the ball 17 times for 130 yards and two touchdowns, including a 44-yard TD run in the fourth quarter, which sealed the deal for the Buckeyes.

Akeem Hunt, RB, Purdue. Hunt was one of the lone bright spots in Purdue's 23-16 loss to Indiana. He accounted for 176 of Purdue's 351 total yards of offense. Hunt also scored Purdue's only touchdown on the day. This marked the second time this season Hunt has topped the 170-yard rushing mark. That's impressive.

Jeremy Langford, RB, Michigan State. Langford closed out his Big Ten career with a bang. The Spartans' senior back ran for 118 yards and two touchdowns in MSU's impressive 34-10 win over Penn State. Langford has now rushed for 100-plus yards in 16 straight Big Ten games, which is the longest streak in the nation. He also has six straight multiple-TD games, a span in which he's scored 15 times.

Darron Lee, LB, Ohio State. This guy was all over the field in Ohio State's 42-28 victory over Michigan on Saturday. Lee recorded a game-high nine tackles, two of which were for a loss, and a sack in the win. However, Lee's biggest play came late in the fourth quarter when he picked up a fumble and returned it 33 yards for a touchdown, which put the finishing touches on the Buckeyes' win over the Wolverines.

Tevin Coleman, RB, Indiana. Coleman put the final stamp on what has been a remarkable season for the Hoosiers' running back. He carried the ball 29 times for 130 yards, becoming the first player in Indiana school history to top the 2,000-yard mark. He finished the season with 2,036 rushing yards, which ranks among the best in the nation.