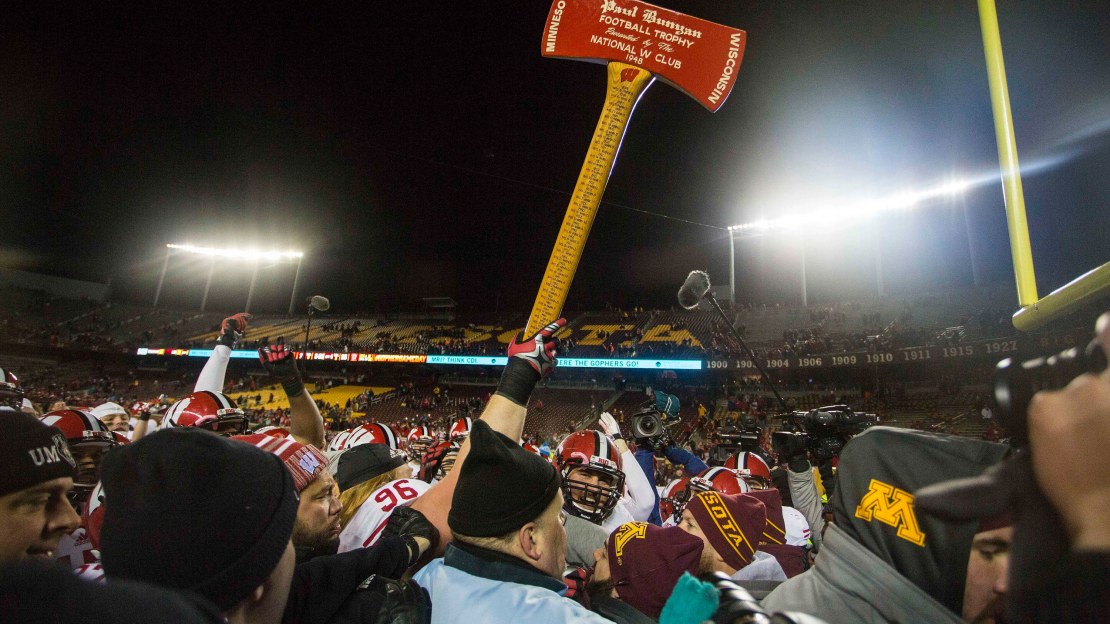 Cool story from Madison.com on Minnesota defensive tackle Cameron Botticelli, who has gone from sleeping in his car to helping the Gophers enjoy a magical season.

More than 2,500 nights have passed since then, and Botticelli hasn?t stopped dreaming of a better life after pushing himself relentlessly by day. An uncle basically adopted him that week and helped chart a new course. It was never easy financially, but Botticelli had brains and enough football talent to walk on at Minnesota. Now, he?ll play for the Big Ten West title on Saturday.

More Gophers: What a ride it has been for Minnesota, which sits on the precipice of playing for the Big Ten championship in just its fourth season under Jerry Kill. Regardless of the result at Wisconsin on Saturday, it has been a remarkable season.

Tom Powers of the St. Paul Pioneer Press says this Gophers season also has been a gift — although it may be a repeatable — to fans who have come to expect mediocrity. It's special in that steady progress was replaced by a giant leap. The program might have fast-forwarded a little bit. Yet if the Gophers lose in Madison, a distinct possibility although no longer a given, it shouldn't be about "what might have been." Because it's already been a lot.

Disturbing news out of Columbus as the family of Ohio State's Kosta Karageorge says the senior defensive lineman is missing and hasn't been seen since early Wednesday when he went for a walk. The Columbus Dispatch filed this latest report this morning.

Interesting question posed by Cleveland.com: What if the Ohio State-Michigan rivalry was on equal footing? The series has seen recent domination the last 26 years, first by Michigan (10-2-1) and now by Ohio State (11-2).

Before these 13-year stretches of dominance, to find an era as one-sided you had to go back to Michigan's control of the start of the rivalry. The first 15 games of the series that began in 1897 consisted of 13 Michigan wins and two ties, the only other time where either side won 10 times in 13 years. And now it's happened back to back. How weird is this? I don?t see OSU?s current dominance ending anytime soon. Do you?

Those flashy Maryland uniforms? They are for recruiting-in case you didn?t know.

"I think kids really understand the partnership that we have with Under Armour due to the fact that Kevin Plank was a former football player here and a graduate of the University of Maryland," Randy Edsall said. "Under Armour is big with the age group that we're involved with. I do think it helps us. I'm just grateful that we have that kind of partnership."

Rutgers coach Kyle Flood says he isn?t worried about the big picture heading into the finale at Maryland.

Still, a win would be nice and enhance the perception of a season that has gone south, as a 5-1 start has morphed into a 6-5 reality. A 7-5 mark looks and sounds a lot better than 6-6. And a win could certainly spell the difference between a day-after-Christmas bowl game in Dallas and a trip to San Francisco for a prime-time affair two days before New Year's.

A few weeks ago, it looked like a lot would be on the line when Nebraska played at Iowa-namely, the West title. But that won?t be the case, as each lost at home last week. Now, only perceptions will be on the line.

Knocking off rival Nebraska in Kinnick Stadium would give the Hawkeyes a solid season, despite failing to meet early expectations, says Andrew Logue of the Des Moines Register. Lose, and the past three months will be an undeniable disappointment - regardless of what happens in any bowl game. In other words, there's an unmistakable gap between 8-4 and 7-5.

"We want to go out with a win," senior safety John Lowdermilk said. "We want to beat Nebraska and we want to keep the (Heroes) Trophy.

Will Randy Gregory and Kenny Bell play for the Huskers? Their status remains up in the air after each was hurt last week vs. Minnesota.

Bo Pelini labeled Bell (head injury) and Gregory (illness) as ?50/50? after a team walkthrough Wednesday. Both players didn?t suit up for Tuesday?s practice.

Check out the great Bob Flounders of Pennlive.com discussing in this video what it will take for Christian Hackenberg to turn things around in what has been a disappointing sophomore season. No doubt, flipping the script vs. visiting Michigan State will be very tough.

It?s only November and Indiana?s season is already at a crossroads, according to IndyStar.com.

Trying to explain his first-ever home loss in the month of November, an 88-86 defensive debacle against Eastern Washington, IU coach Tom Crean zeroed in on his team's core problem right now.

"Our margin for error of guys not being at their best is not high right now," he said. "But we're asking an awful lot of a young group."

Looks like Michigan?s Caris LeVert is going to be as good as most felt.

"He gets into the lane, and he can finish or find people," John Beilein said following the Wolverines' 60-55 loss to No. 12 Villanova at Barclays Center. "We'll either play off him, his score or his residual action from him being able to see the court so well. He really is good at it."

Brendan Quinn of Mlive.com says that what LeVert really is, in fact, is indispensable. He leads Michigan in rebounding (6.8 per game), assists (4.4) and steals (1.8), and ranks second to Zak Irvin in scoring (16.8) and field-goals attempted (61). His importance is spread wide and it was glaring in Michigan's two games in Brooklyn in the Legends Classic.