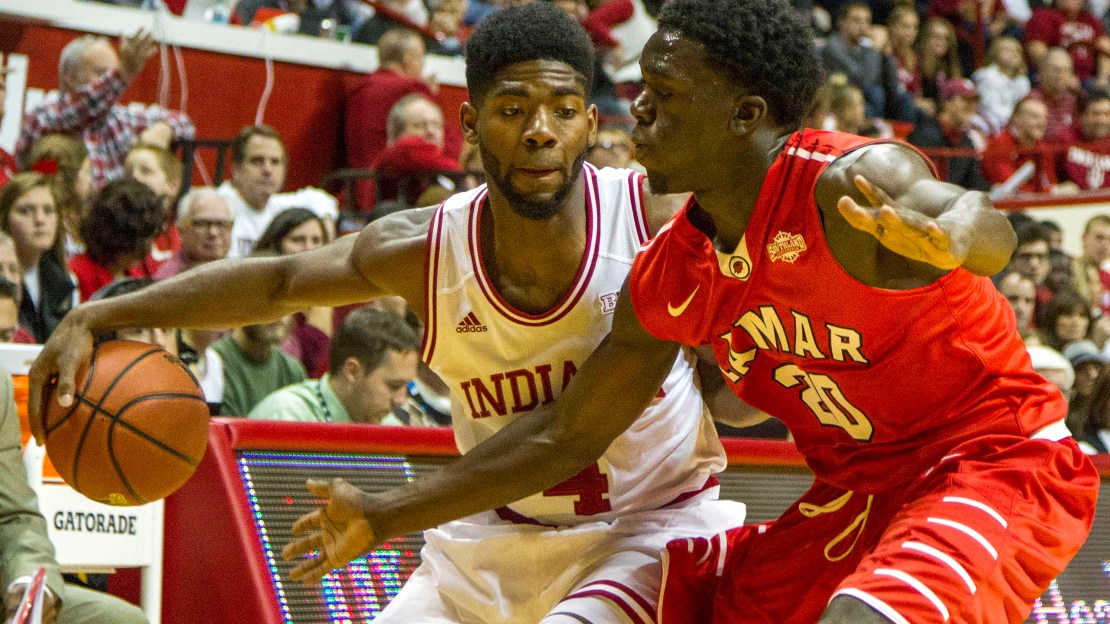 We're a couple weeks into the college basketball season, and there's no doubt the youngsters are going to alter the landscape of this year's Big Ten race.

The latest crop of freshmen not only features star power, such as Indiana's James Blackmon Jr. and Ohio State's D'Angelo Russell, but the first-year talent is spread throughout the conference.

Check it out below.

Vince Edwards, Isaac Haas, Dakota Mathias and P.J Thompson are already playing heavy minutes for Purdue and will have to continue to produce if the Boilermakers are going to bounce back. Read more about Edwards here.

The coaches at Penn State are pleasantly surprised at the poise and outside shooting ability of Shep Garner, which has allowed D.J. Newbill to put up explosive early-season numbers (23.6 ppg, 5.6 rpg, 3 apg) on the wing.

Raw, yet explosive forward Leron Black is playing so hard in practice for 4-0 Illinois, John Groce and his staff are worried he is going to injure himself. That's exactly the kind of player Groce loves and the toughness Illinois needs to improve.

Early in the season, Minnesota's Nate Mason is already a key part of Richard Pitino's high octane offense and looks to be the guard the Gophers can build upon for the future.

Marvin Clark Jr. earned his first start for Tom Izzo against Santa Clara and delivered 15 points. He is already the strongest player on the team, shoots the 3-pointer and should be ready to bang with the big boys when conference play starts. With "Tum Tum" Narin Jr. playing limited minutes, and fellow freshman Javon Bess injured, the talented Spartan rookies are an intriguing story heading into December.

Vic Law is the highest-rated recruit at Northwestern since my old Nike Camp roommate Evan Eschmeyer. Law plays above the rim and has combined with fellow freshman Bryant McIntosh to bring a new level of talent to Evanston.

Robert Johnson is a future star at Indiana, but the story has been the brilliance of the aforementioned Blackmon Jr., who has Indiana off to a 4-1 start. He scored 26 points and pulled down seven boards against then-No. 23 SMU. My BTN teammate, analyst Shon Morris, says Blackmon has the best Big Ten jump shot he has witnessed since Michigan superstar Glen Rice.

Kam Chatman's improvement at Michigan will be a key if they want to repeat as Big Ten champs.

And what about the flat-out skill of the Russell, the aforementioned Ohio State star? He is averaging 18 points, 5 rebounds, and 5 assists for the undefeated Buckeyes. He shoots with such ease and reminds me of a young Chris Mullin, the former NBA All Star and original Dream Teamer. Like Mullin, D'Angelo has a knack for scoring and his wrist action on every shot is so effortless.

Finally, for everyone who thought Maryland would struggle in its inaugural year in the Big Ten, freshman star point guard Melo Trimble stepped up this week and ended that argument. He torched Arizona State for 31 points and, and he played a solid game in Maryland's huge upset against No. 12 Iowa State.

Fellow Maryland freshman Jared Nickens might be a star in the making, while yet another Terp, Michal Cekovsky, just did a great job against All-American candidate Georges Niang.

This early in the season, the Big Ten Freshman of the Year award is up for grabs.