Best of Week 14: A whole lot of Minnesota at Wisconsin here 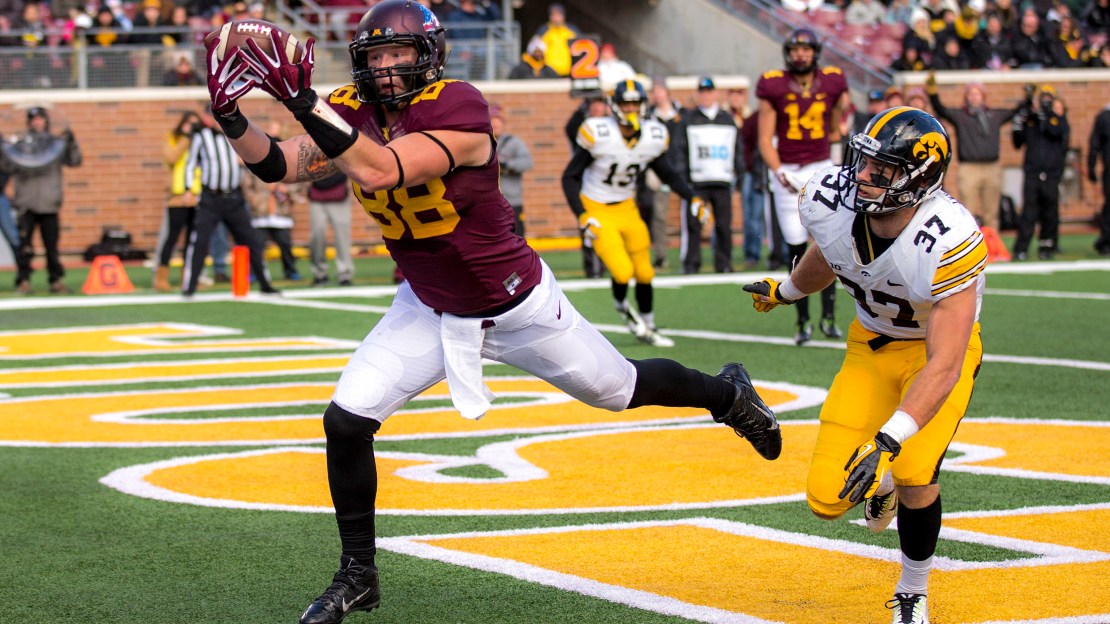 All eyes will be on Madison, though, where Minnesota and Wisconsin will meet in a de facto Big Ten West title game with the winner to take on Ohio State for the league title.

And we also will have another edition of ?The Game.? Can Michigan spring an upset on the Buckeyes?

Best game: Minnesota at Wisconsin. The battle for Paul Bunyan?s Axe is usually a provincial rivalry. But it takes on a greater scope this year, with the winner taking the West and playing in the Big Ten championship game. It will be a classic Big Ten battle pitting teams that win with good running games and defense. How many combined carries will there be? Eighty? The Badgers are No. 1 in the Big Ten in rushing (343.5 ypg); the Gophers are No. 6 (228.9 ypg).

Best matchup: Minnesota linebacker Damien Wilson vs. Wisconsin running back Melvin Gordon. No, Wilson isn?t the only Gopher tasked with slowing down Gordon, but he?ll have to set the tone and lead the charge from his spot in the middle of a Minnesota defense that is No. 6 in the Big Ten vs. the run (154.6 ypg). He is enjoying a stellar season, ranking No. 3 in the Big Ten in tackles. Gordon has been nearly impossible to slow, leading the nation with 2,109 yards rushing and 25 touchdowns. He has ripped off over 200 yards rushing in three games in succession. And with his first yard on Saturday, he will set a Big Ten single-season rushing standard.

Player on the spot: Minnesota TE Maxx Williams. Everyone knows the Golden Gophers want to run the football. But that task could be complicated if David Cobb isn?t 100 percent after hurting a hamstring last week in the second half at Nebraska. Knowing that, there is even more of an onus on a Minnesota passing game that ranks last in the Big Ten (134.7 ypg). Williams has to be a safety blanket for Gophers? quarterback Mitch Leidner, working the middle of the field and the seams down the field, turning third downs into first downs. Williams was named a Mackey Award finalist this week, as he has 28 receptions for 418 yards with seven TDs.

Keep an eye on: The battle between the Michigan State offense and the Penn State defense. The Spartans have forged their rep under Mark Dantonio as a tough defensive team. But this edition of MSU is known for its offense, which ranks No. 1 in the conference (514.5 ypg) behind Connor Cook, Jeremy Langford and Tony Lippett. That offense will lock horns with a Penn State defense that is No. 2 in the Big Ten (267.2 ypg). A matchup within this matchup will be watching Michigan State running back Langford battle Penn State middle linebacker Mike Hull, the Big Ten?s No. 1 tackler.

Best quarterback matchup: Honestly, there isn?t much that stands out in this department this week. Let?s go with Michigan State?s Connor Cook vs. Penn State?s Christian Hackenberg. Cook leads the Big Ten in passing (247.3 ypg) and has 21 touchdowns and just five interceptions. Hackenberg is No. 3 in passing (219.2 ypg), but he has struggled most of the season with just eight touchdown passes and 14 interceptions as he works behind a spotty line. In fact, he?s coming off his worst effort of the season in a 16-14 loss at Illinois in which he had a season-low 93 yards passing. Still, there?s enough talent in Hackenberg to keep an eye on his battle with Cook, who has been the league?s second-best signal-caller behind J.T. Barrett of Ohio State.

Best coordinator battle: How about Ohio State offensive coordinator Tom Herman vs. Michigan defensive coordinator Greg Mattison? Yes, please. The Wolverines? issues have been on offense-not defense. Herman has pushed the buttons on one of the nation?s top offenses all season. The Buckeyes are No. 1 in the conference in scoring (44.3 ppg) and No. 2 overall (511.4 ypg). Balance has been the order of the day, with quarterback J.T. Barrett traveling by air and Ezekiel Elliott by land. Mattison has forged a good unit that ranks No. 3 in the Big Ten in scoring (20.6 ppg) and No. 4 overall (301.8 ypg).

Upset alert: Rutgers hasn?t exactly been on a tear, losers of four of its last five games. Offense ? defense ? it all has struggled. But Maryland needs to be careful when the Scarlet Knights visit this Saturday in what could be a burgeoning rivalry. RU could use a victory to boost the overall perception of a season which began amid the promise of a 5-1 start but is threatening to morph into a 6-6 reality. No doubt, 7-5 sounds a lot better. The Terps-one of the Big Ten?s pleasant surprises as they seek a 5-3 Big Ten mark–need to be careful playing a squad with a sense of urgency.