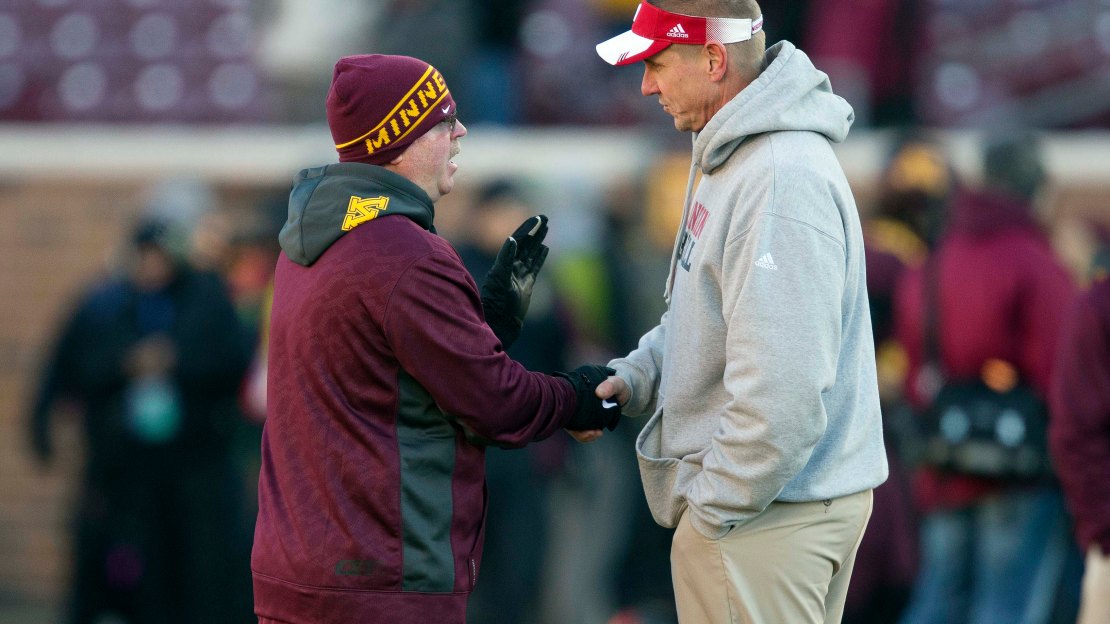 When it comes to rivalries, few are more fun and intense than the battle for Paul Bunyan?s Axe between Wisconsin and Minnesota, the longest-running rivalry in major college football that began in 1890.

This year?s clash in Madison will be one of the biggest and most important since the 1962 meeting where the winner went to the Rose Bowl. The Badgers took that game in Madison, 14-9.

The stakes this Saturday aren?t that high. Still, the winner will be celebrating a lot more than taking home the coveted Axe.

This year, the winner also will win the West and advance to Indianapolis for the Big Ten championship game to play Ohio State.

The Badgers have thoroughly dominated the Gophers of late, winning the last 10 meetings and 17 of 19.

Here is a look at some of the more memorable Axe battles in recent years, a series Minnesota leads, 59-56-8.

This is referred to by some as the ?Miracle at the Metrodome.? And it?s one of the biggest gut punches the Gophers have taken in the last 50 years. Wisconsin?s Jonathan Casillas blocked a punt and Ben Strickland recovered it in the end zone with 30 seconds left to complete a wild comeback and lift Wisconsin to victory.

"When you think you've seen it all, you haven't seen it all," Wisconsin coach Barry Alvarez said.

With the Golden Gophers leading 34-31, Justin Kucek lined up to punt at the Minnesota 5. Kucek dropped the snap, picked up the ball and tried to punt. But Casillas blocked it. Strickland recovered for the winning score.

Before Minnesota?s Rhys Lloyd went out to attempt a game-winning field goal, Minnesota coach Glen Mason told him: "Don't forget to get the Axe," which sat on Wisconsin's sideline.

Lloyd went out and proceeded to boot a 35-yard field goal to give the Gophers a win. Lloyd led a rush of Gophers to the Wisconsin sideline, grabbed the Axe and paraded it around the Metrodome.

Marion Barber III had 139 yards rushing and a touchdown, and Laurence Maroney added 135 yards and a score for the Gophers.

A week after beating Ohio State in Columbus, the Badgers edged Minnesota in overtime. Vitaly Pisetsky's 31-yard field goal in overtime was the difference.

The Badgers played without head coach Barry Alvarez, who was in the Mayo Clinic in Rochester, Minn., 75 miles away, awaiting knee surgery. Assistant head coach John Palermo coached the team.

Ron Dayne would go on to win the Heisman but had his worst game of the season, as the Gophers held him to a season-low 80 yards rushing.

Minnesota dealt the Rose Bowl-bound Badgers what would be their lone loss of the season. The Gophers had just three wins to that point; Wisconsin was 6-0.

Minnesota running back Chris Darkins scored a pair of touchdowns and quarterback Scott Eckers passed for 267 yards and two scores to spark the upset.

The Badgers were led by the 100-yard rushing efforts of James White and John Clay. But this meeting was notable for Bret Bielema?s decision to go for two points with 6:39 left in the game with a 41-16 lead.

"I thought it was a very poor decision by a head football coach and he'll have to live with that," said Minnesota coach Tim Brewster. "It was wrong. Everybody in here knows it and everybody in college football knows it. It was wrong."

Bielema defended his decision as being the correct one on the card he carries to determine whether to kick an extra point or go for the 2-point conversion.

John Hall booted a 60-yard field goal and Aaron Stecker had a 100-yard kickoff return for a TD to end a two-game Minnesota winning streak in the series. But a decision to go for a touchdown instead of kicking a field goal, leading 34-20 with eight minutes left, nearly undid the Badgers.

The Gophers stopped the Badgers and proceeded to score a TD with 6:05 left to bring Minnesota within a touchdown. Alas, Wisconsin held on.

"I'm stupid," Alvarez said with a smile. "We got carried away. It was foolish. I apologized to the kids for it. I made a bad mistake."

Call this the ?Anthony Davis Game.? He ran for a career-high 301 yards and five touchdowns on 45 carries as Wisconsin won back the Axe. Davis' five TDs tied the school record.

The Badgers became bowl-eligible for the first time since 2000 and also avoided a last-place finish and a second straight losing season.

The Golden Gophers beat the Badgers, 28-21, the year before to keep Wisconsin from going unbeaten during what was a march to the Rose Bowl. So, the Badgers were looking for revenge in Camp Randall.

But Minnesota got Wisconsin again. This is the last time the Gophers have left Madison with a win.