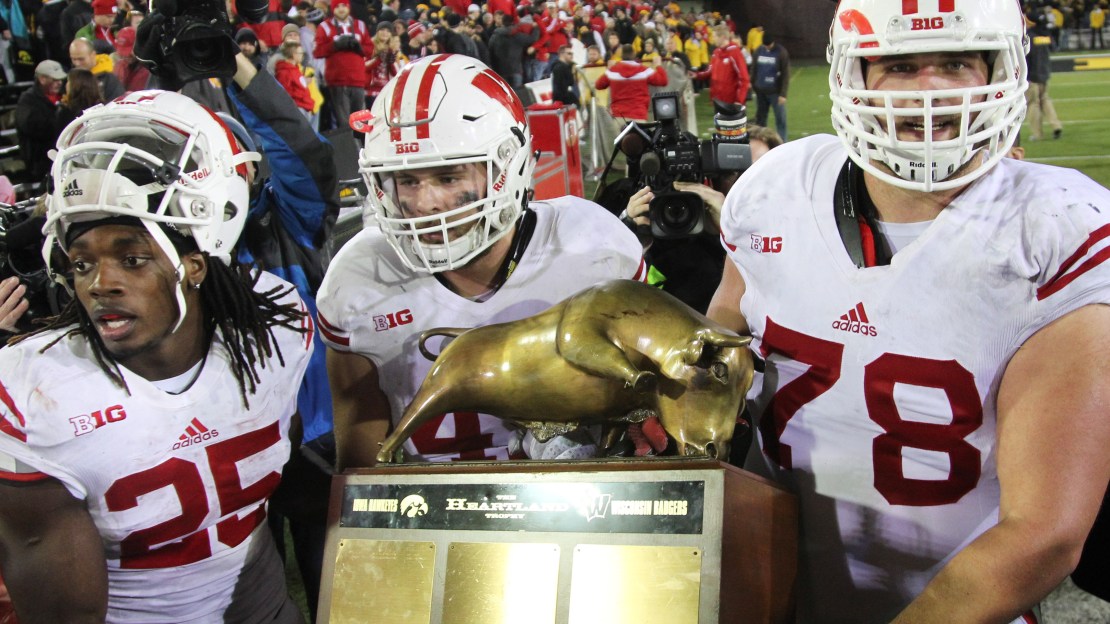 The Big Ten has saved some of its best for last, as this lineup features seven games that all are enticing.

All eyes will be on Madison, where Minnesota will play Wisconsin for the Big Ten West championship on BTN (watch on BTN2Go). The winner will play Big Ten East champ Ohio State in the Big Ten title game, the Buckeyes' second consecutive trip to Indianapolis.

And, of course, there?s ?The Game.? Every Michigan-Ohio State game is memorable for one reason or another.

Here are my Week 14 previews and game rankings.

1. Minnesota (8-3, 5-2) at Wisconsin (9-2, 6-1) – 3:30 p.m. ET, BTN (watch on BTN2Go). If it was only the Paul Bunyan?s Axe on the line, this would be a great game. But the West Division title and a trip to the Big Ten championship game to play Ohio State also is at stake. How great is this gonna be? This may come down to which quarterback plays best: The Gophers? Mitch Leidner or Wisconsin?s duo of Joel Stave and Tanner McEvoy. Minnesota also has to hope running back David Cobb is over a hamstring injury that sidelined him in the second half of last week?s game. Jerry Kill says he's prepared to hold Cobb out if needed. The Badgers? Melvin Gordon will set the Big Ten single-season rushing mark with his first yard of the game as he continues his pursuit of the FBS single-season rushing mark. The Gophers haven?t left Madison with a win since 1994.

2. Michigan (5-6, 3-4) at Ohio State (10-1, 7-0) – noon ET, ABC. This is one of America?s iconic rivalries, but it lacks pizzazz this season. The Wolverines must pull the Titanic upset if they want to get bowl eligible, playing an OSU team that has won 23 regular-season Big Ten games in a row. The last OSU loss? At Michigan, in 2011. The Buckeyes already have clinched the East Division title but must win to stay in the thick of the playoff battle and to improve their stock. Still, it?s a rivalry game. And, we all know what can happen in those. The Buckeyes have dominated this series of late, going 11-2 vs. the Wolverines in the last 13 meetings. When did Michigan last win in Columbus? It was the 2000 season, when John Cooper was the Ohio State coach.

3. Nebraska (8-3, 4-3) at Iowa (7-4, 4-3) – noon ET (Friday), ABC. This game lost a lot of luster when each team lost at home last week, with the Cornhuskers falling to Minnesota and the Hawkeyes getting beat vs. Wisconsin. The Huskers won, 13-7, the last time they visited Iowa City in 2012, but the Hawkeyes dominated last year in Lincoln, taking a 38-17 triumph that almost cost Bo Pelini his job. Nebraska has lost two in a row. What will be its mind-set? A loss would be NU?s fourth, making it seven years in a row with four defeats. This game will go a long way in defining how this season is labeled in Iowa City, as the Hawkeyes have yet to beat a FBS team with a winning record.

5. Illinois (5-6, 2-5) at Northwestern (5-6, 3-4) – noon ET, ESPNU. It?s all right there for both teams-win this game, and go to a bowl. Each squad brings a 5-6 mark into the contest. And each squad is coming off a big win, NU on the road at Purdue and Illinois vs. Penn State. The Wildcats have won two in a row behind a revived offense, which now is without Trevor Siemian (ACL). The Fighting Illini got a lift from their sagging defense last week along with backup quarterback Reilly O?Toole. The Fighting Illini have been on the short end of this rivalry of late, as NU has won the last two meetings and eight of 11. Illinois hasn?t won in Evanston since 2002. (The Illini won in Wrigley Field in 2010.)

6. Rutgers (6-5, 2-5) at Maryland (7-4, 4-3) – 3:30 p.m. ET, ESPNU. A battle between the Big Ten?s newcomers, and each already is bowl eligible. Did you think that was possible back in August? Maryland is the third-best team in the East and is aiming for a nice bowl bid and 5-3 Big Ten slate coming off a good victory at Michigan. The Scarlet Knights are struggling down the stretch, losers of four of five with the defense getting ripped for 56, 42, 37, 23 and 45 points the last five games. Since beating Indiana to enjoy a modest two-game winning skein, the Terrapins have been on a loss, win, loss, win, loss, win pattern. These schools last played in 2007 and 2009, with each winning in the other?s stadium.

7. Purdue (3-8, 1-6) at Indiana (3-8, 0-7) – noon ET, BTN (watch on BTN2Go). This is all for pride, as each program already is eliminated from bowl consideration. Both teams have lost at least five in a row. In fact, the Hoosiers haven?t won a Big Ten game yet. Defense is an issue for both teams. But Indiana has Tevin Coleman, one of the top backs in America. Purdue? It has no such luxury on offense. Purdue needs to get back the Old Oaken Bucket from Indiana. History doesn?t matter, but here?s this: Since 1997, the Boilermakers are 13-4 vs. Indiana. Still, mojo is shifting in this rivalry toward IU. Coleman needs 94 yards rushing for 2,000 on the season. I?m thinking he?ll get that-and then some-vs. a Boilermakers defense that is No. 11 in the Big Ten vs. the run (187.8 ypg).