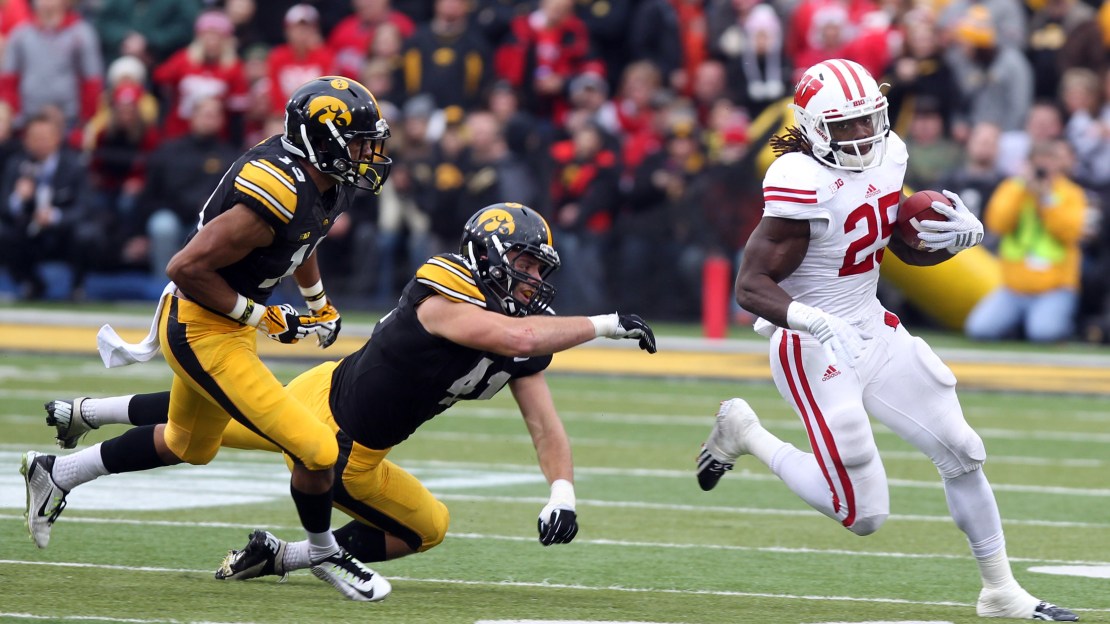 So, Melvin Gordon had the FBS single-game rushing mark for one week, as Oklahoma?s Samaja Perine broke it on Saturday with 427 vs. Kansas. Here he is talking about it.

Of course, loss of the record doesn?t do a thing to diminish what Gordon has done. Just ask Tom Oates of Madison.com.

Oates notes that Heisman candidacies aren?t constructed solely of numbers. They also consist of clutch performances, tough performances, winning performances. Gordon?s fourth quarter Saturday at Iowa had a touch of all three. It was very impressive.

Tough loss for Michigan on Saturday, which fell at home to Maryland and now must win at Ohio State to become bowl eligible. Tall order. A big reason for Michigan?s struggles: A passing game that continues to flounder. And Brady Hoke has no answer.

Nick Baumgardner of Mlive.com notes that Michigan's passing offense has put up just 162.8 yards per game this season. And unless Devin Gardner throws for 209 yards next week Ohio State, Michigan could finish the season with fewer than 2,000 yards passing for just the third time since 1985.

Ohio State stayed at No. 7 in the AP and coaches polls, but it lost points in each.

Could that mean a drop is coming in the College Football Playoff poll on Tuesday? Maybe. The Buckeyes can?t just win games-they need to win impressively. Style matters in OSU?s playoff pursuit-it does for all teams. Still, in the end, Doug Lesmerises of Cleveland.com thinks the final playoff spot may come down to Baylor and Ohio State.

What could separate them? Maybe how dominant the teams were in victory.

It?s an understatement to say that Penn State is disappointed in its loss at Illinois. Converting on third downs was a big issue. Illinois was able to do it because of QB Reilly O?Toole and WR Mike Dudek. The Nittany Lions had no such options.

David Jones of Pennlive.com thinks this loss may be the worst in the last three tumultuous seasons for the Nittany Lions. And, I think he?s correct. A 6-6 finish is looking like a reality.

Speaking of Dudek, just how good is the freshman?

With one game to go, he has 62 catches for 902 yards. That moves him to within 25 yards of joining the top 10 receiving seasons in Illini history. Ironically, sitting in 10th place is Dudek?s position coach, Mike Bellamy, who had 927 yards in 1989. It?s still possible for Dudek to reach 1,000 yards on the season and only seven other receivers have done that. The all-time single-season leader in receiving yards is All-American David Williams, who had 1,278 yards in 1984.

If Dudek has eight catches at Northwestern, he would vault into fifth place for the most receptions in a single season. Williams has the top two seasons in school history, making 101 catches in 1984 and 92 in 1985.

I think we all can agree with Chip Scoggins of the Minneapolis Star Tribune that Minnesota?s win at Nebraska shows progress in the Gophers? program under Jerry Kill.

This was the signature win of the Kill era and sets up the biggest game for the program in decades. Win at Wisconsin, and go to the Big Ten title game. Amazing. Kill has delivered all of this in four scant seasons.

Nebraska?s loss at home to Minnesota? Well, it wasn?t a good thing for Bo Pelini, says Steve Sipple of the Lincoln Journal Star.

Nebraska appears on track for a seventh straight four-loss season under Pelini (although five losses looms as a possibility). The conference-title drought has officially reached 15 seasons.

Lee Barfknecht of Omaha.com wonders if the next cornerstone to crumble for this proud program is the stunning 340-game sellout streak.

Yes, these are challenging times in Lincoln–if you didn't already know it.

In case you missed it last night, Shannon Scott dished out an Ohio State record 16 assists in the Buckeyes' 106-48 rout of Sacred Heart. Scott, who topped former teammate Aaron Craft's record, didn't know he was flirting with history until late in the game.

?It doesn?t mean a lot,? Scott told Bob Baptist. ?It?s good to say you have it, but I can?t really (hang) my hat on that. We want to win a lot more games. I can?t just focus on having a record right now. We want to be the best we can be. So it?s time to put the game behind us now and get ready for the next one.?

Another Big Ten point guard, Rutgers' Myles Mack, had a memorable night Sunday. Mack registered a career-high eight steals, one off the Rutgers' record, in the team's 76-73 win over St. Francis-Brooklyn.