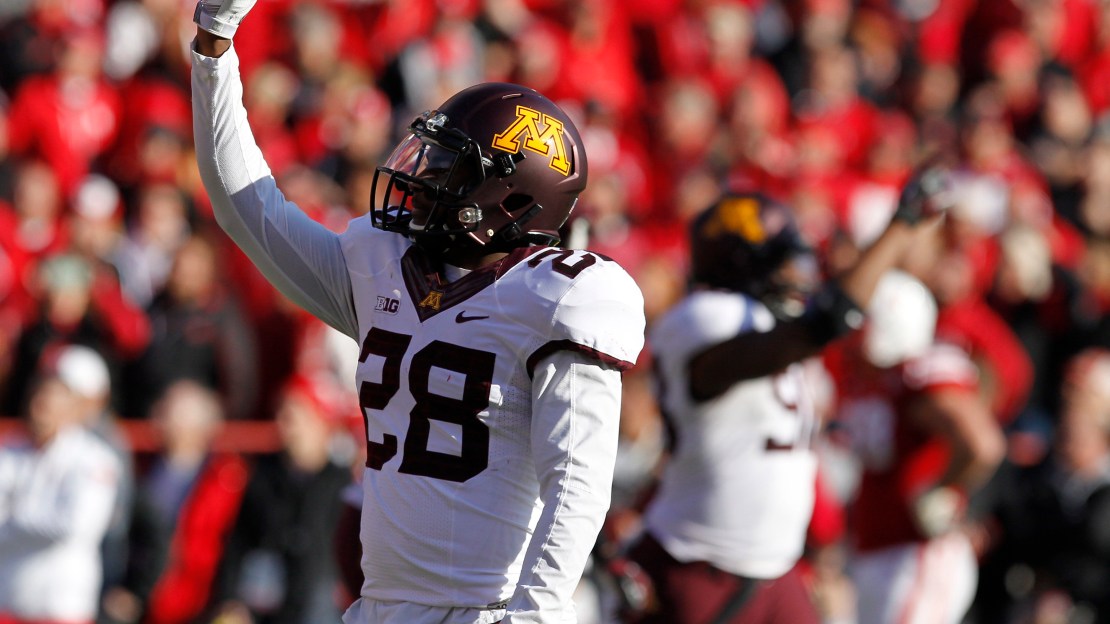 Minnesota is one win from playing in the Big Ten championship game.

Let me type that again: Minnesota is one win from playing in the Big Ten championship.

Those are words I didn?t think I ever would punch out on the keyboard of my company-issued EliteBook 844Op. But the amazing story of Minnesota's program continues.

The latest chapter of this tale was perhaps the best yet. No doubt, maybe years from now, we?ll look back on the Golden Gophers? 28-24 win at Nebraska on Nov. 22, 2014, as the day Minnesota truly turned the corner in its ascent to becoming a Big Ten program that matters.

Jerry Kill has authored some good wins since arriving amid the rubble of the Tim Brewster era for the 2011 season. Last season, Minnesota dumped Nebraska in Minneapolis. There also was a nice home win vs. Penn State, part of a run of four Big Ten wins in a row for the first time since 1973.

But Kill and Co., have taken things to another level this fall. It began with a Little Brown Jug victory at Michigan back on Sept. 27. Then, there was a 51-14 Floyd of Rosedale drubbing of Iowa on Nov. 8. And today, the piece de la resistance: The program?s first win at Nebraska since 1960.

"You guys have been here a lot longer than we have, but I know from our standpoint coming in four years ago I would say that I was begging administration that this whole process would take seven to eight years,? said Kill, whose team is 9-4 in its last 13 Big Ten games. ?I think you all know, living in Minnesota, we still have a lot of work to do. We really do in a lot of areas to get where we want to be. I think it has happened a lot faster than I would certainly think.?

No one envisioned this type of success this quickly when Kill was plucked from Northern Illinois and tasked with the chore of making Minnesota football matter. Well, so far, so good-and so soon.

This is the signature win of the Kill era. But, you get the feeling it will be trumped at some point in the near future. Perhaps as soon as next week, when Minnesota plays at Wisconsin for the Big Ten West championship.

Now, the Gophers-assured of their best Big Ten mark since 2003–are dreaming really big as they aim for the program?s first Big Ten championship since earning a share of the title in 1967.

"(This program has) came a long way,? said quarterback Mitch Leidner. ?I was part of (some teams that struggled). I've been a part of those seasons and being a part of this one now you can see how a program develops and guys buy in."

On this afternoon in Lincoln, Nebraska, Minnesota never wavered. Minnesota never buckled. And Minnesota beat Nebraska. The Gophers wouldn?t have won without one of the most stupefying plays of 2014, authored by Minnesota cornerback Briean Boddy-Calhoun.

With the Gophers clinging to 28-24 edge, Boddy-Calhoun ripped the ball out of De'Mornay Pierson-El's hands at the Minnesota 2-yard line with 1:19 left just as Pierson-El was on the verge of scoring. The Gophers ran out the clock to end a 20-game road losing streak against Top 25 opponents that dated to 2000.

"It just happened so fast," Boddy-Calhoun said. "I'm sticking a guy, and the next thing I know it's in his hands, then it's right there in front of me. The first thing I thought of was, 'Get the ball.'"

The thoughts going through the head of Nebraska?s Bo Pelini couldn?t have been good. The loss trashed his hopes of leading the Cornhuskers to the program?s first league title since 1999. Now, Pelini sits on the precipice of notching his seventh consecutive four-loss season with a trip to Iowa next.

"We lost because we didn't deserve to win," Pelini said. "We didn't play well enough, had too many busts, our execution was subpar. Our tackling was horrendous. Too much leaky yardage. All those things add up to losing against a good football team."

And make no mistake about it: Minnesota is a good football team. A big reason for that is Leidner, the ultimate ugly duckling who just gets the job done. He was at it again in the cauldron that was Nebraska?s Memorial Stadium, hitting 8-of-17 passes for 135 yards. He also rushed 22 times for a team- and season-high 110 yards with two touchdowns. It was an impressive effort coming off a 31-24 home loss to Ohio State in which he completed only 7-of-19 passes for 85 yards with two interceptions.

Another morsel that makes this win impressive: Minnesota lost star running back David Cobb to a hamstring injury in the third quarter. But Donnell Kirkwood stepped in for a guy he lost his job to last season.

"I'm always prepared. I wouldn't say I was waiting behind David (Cobb),? said Kirkwood. ?He's a great person. He's a helluva running back, I'd be the first one to say that. It's just being prepared. I get my reps in practice. Coach always harps on you never know what's going to happen. You get in and do your best job, and I just felt like today was an opportunity where I can know what I am doing out there even though I am limited in game time."

Now comes the biggest game for the Minnesota program in ? well, a long, long time. Wisconsin, which dispatched Iowa 26-24 on Saturday, waits.

"This is what we have been working for all year,? said Leidner. ?Whoever wins gets to go to the Big Ten championship game, and everyone is excited for it. We get to battle for the ax. It's going to be a helluva game."

And maybe another helluva moment in this too-good-to-be-true story that is being written by Minnesota.