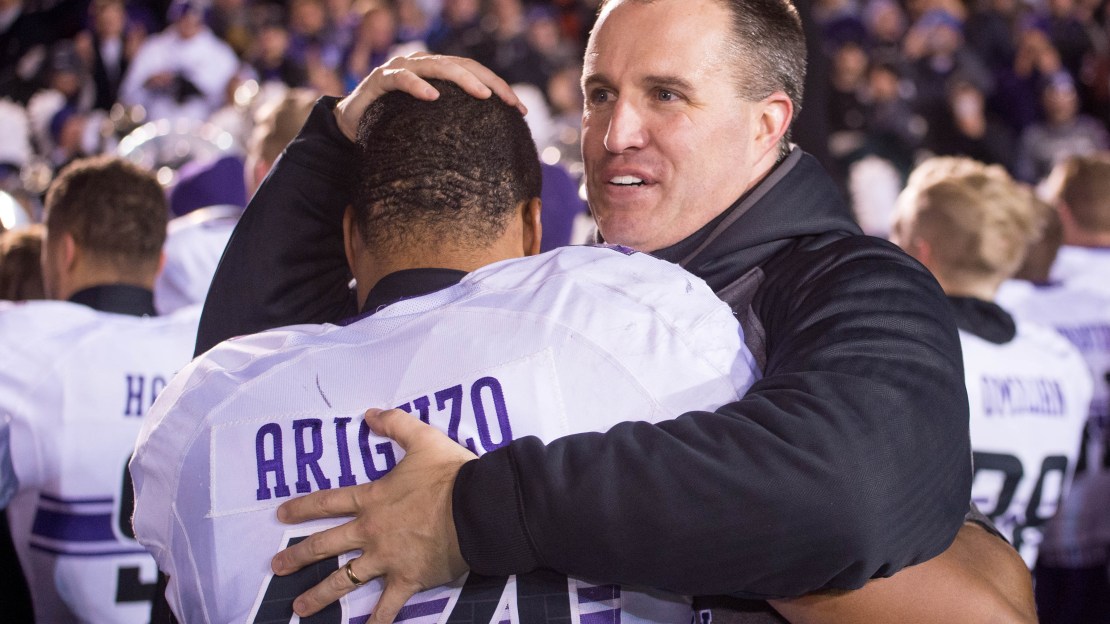 It?s win-out or stay home for Northwestern, which faces the first of two must-win games to go bowling this Saturday at Purdue.

The win at Notre Dame is a nice boost for NU. But Pat Fitzgerald has reminded his players what transpired in 1995 after the Wildcats pulled off a 17-15 shocker at Notre Dame Stadium. They lost at home to Miami of Ohio.

You know you have arrived if you have a sandwich named after you. Well, it has happened to Iowa hoops coach Fran McCaffery.

Good video here from Cleveland.com that looks at where Urban Meyer?s ?most improved team? has grown the most in 2014. I say it?s the back-end of the defense.

The Ohio State team that just picked two big road wins at Michigan State and Minnesota is much different than the team that struggled in its opener against Navy and lost to Virginia Tech. Cleveland.com notes that the Buckeyes have rebounded from that loss enough to pull to No. 6 in the College Football Playoff. Can the Buckeyes make it? It?s gonna be close. But since their schedule isn?t very tough, OSU will need to win-and win impressively.

It hasn?t been a good season for Penn State QB Christian Hackenberg. How bad has it been? He?s on pace to become the most sacked Big Ten QB of the decade.

David Jones of Pennlive.com says Hackenberg has now been sacked 37 times. With three games (including a bowl) still to go, that total is already tied for sixth in Big Ten annals for a single QB in a season since the sack stat began to be officially logged by the NCAA in 2002. And it is on pace to eclipse the conference record for personal punishment set by Iowa's Jake Christensen in 2007, when he was sacked 46 times, according to Jones? research.

The bonus is part of Franklin?s contract. Check it out.

When the season began, Rutgers? Tyler Kroft looked to be one of the Big Ten?s top tight ends. But things haven?t gone as expected.

After a breakout sophomore season when he led the team with 43 catches for 573 yards and four touchdowns, expectations were high for Kroft. But he has been invisible for long stretches. Kroft has 17 catches, which ranks second on the team, for 179 yards and no touchdowns in 10 games.

"Obviously it hasn't been the numbers that I've wanted," Kroft said. "But I think I'm blocking very well right now. It's kind of being a team player. That's what comes with the game."

There is no other way to describe Nebraska?s loss at Wisconsin than as ?embarrassing.? Unfortunately, big-game blues are nothing new to Bo Pelini?s Huskers. Everyone is frustrated.

As Pelini recalled Monday how a 17-3 lead turned - like a bullet train - into the 11th double-digit loss since entering the Big Ten in 2011, he returned to a familiar theme of his tenure.

?I feel like our guys are putting so much pressure on themselves that they?re not going to play to win, they?re playing not to lose,? Pelini said. ?And that?s a bad recipe. These kids want to win in the worst way. They want to have success. You try to think back as a coach. Did you handle it the right way? Did you try not to put too much pressure on them and give them the best chance to go out there and have fun and play the game??

Count the great Loren Tate of the Champaign News-Gazette among those who are uninspired by non-conference matchups he?s seeing, which largely are glorified exhibitions.

Remember ex-Michigan big man Jon Horford? He?s making the most of his opportunity with Florida.

Mlive.com says he is taking advantage of a depleted rotation offering plenty of playing time, Horford is averaging 14.0 points, 6.0 rebounds and 1.5 blocks with the Gators. He's also added an entirely unknown aspect to his game. Having made 1-of-10 3-pointers in his Michigan career, Horford is 4-for-8 this season. He made 3-of-6 on Monday night in a 69-67 upset home loss to Miami.