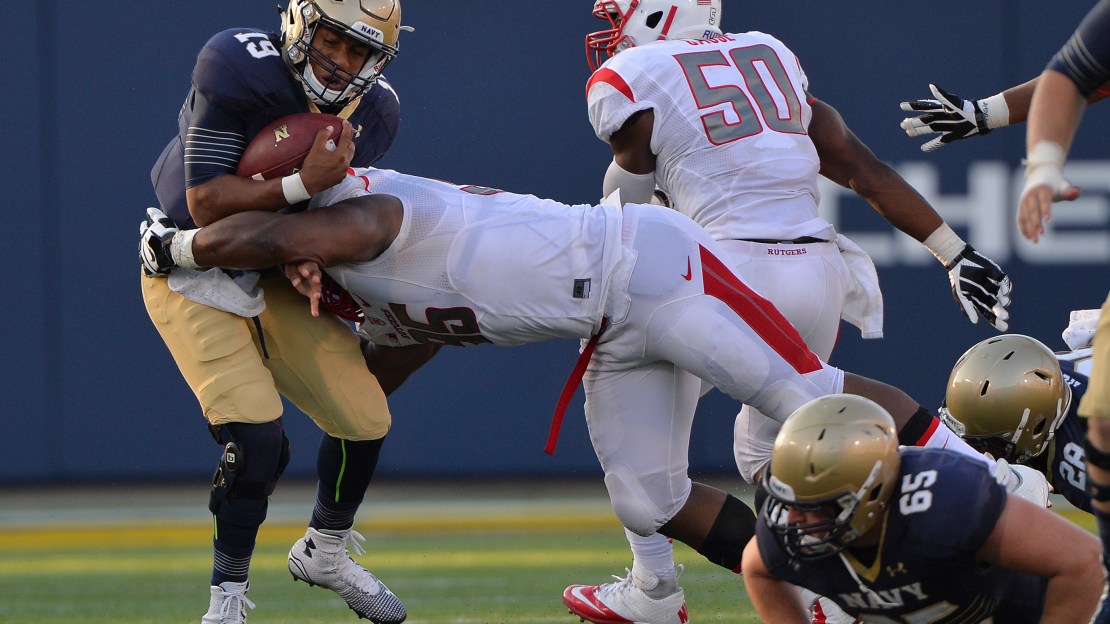 Pretty cool video here of Rutgers nose tackle Kenneth Kirksey doing a backflip, a signature move for the 275-pounder. Impressive to see a big man do this.

Bill Landis of Cleveland.com takes a look at how Ohio State QB J.T. Barrett stacks up vs. other Heisman candidates.

Urban Meyer declared Barrett a Heisman contender on Monday. I agree. No one is really running away with the race. In my mind, Oregon?s Marcus Mariota, Mississippi State?s Dak Prescott, TCU?s Trevone Boykin and Alabama?s Amari Cooper are in the hunt, along with Wisconsin?s Melvin Gordon. I think Barrett?s credentials stack up with those guys' resumes.

Interesting piece by Dustin Hockensmith of Pennlive.com, who has drawn parallels between Bill O?Brien?s first season at Penn State and the Texans.

Big blow for Michigan, as star end Frank Clark has been booted following a domestic violence charge. He was perhaps the defense?s best player, likely headed for all-league honors as one of the Big Ten?s top pass rushers.

Watch Nick Baumgardner and Brendan F. Quinn discuss the subject in this video.

Invites to the Senior Bowl have been going out. And Michigan State?s Jeremy Langford got one.

He has had another nice season, ripping off 100 yards rushing in 13 consecutive games in a row vs. Big Ten foes. The Big Ten is filled with strong running backs this season, as Langford ranks fifth in rushing behind Wisconsin's Melvin Gordon (190.9 yards per game), Indiana's Tevin Coleman (167.8 yards per game), Minnesota's David Cobb (135 yards per game) and Nebraska's Ameer Abdullah (131.9 yards per game).

Legendary Sid Hartman of the Minneapolis Star-Tribune wonders how Nebraska will react to its humiliating loss at Wisconsin.

I think the Cornhuskers will be refocused. Plus, they will want to payback Minnesota for losing in the Twin Cities.

Speaking of Minnesota, Patrick Reusse of the Star-Tribune thinks it?s all on Jerry Kill now-the wins and losses.

Reusse says that four years into the Kill era, this is an exact re-run of Glen Mason after he replaced Jim Wacker in December 1996. The Gophers had to get better with Mason, and they did. Reusse doesn?t recall the same need with Gopher hardcores to react to every setback by bleating, ?You have to admit it?s a different program now than it was with Wacker.??

Four seasons. Four recruiting classes. This is Jerry Kill?s team, writes Reusse. The Gophers? wins belong strictly to his program, and so do the losses.

It was good to see Gophers? TE Maxx Williams land as a finalist for the Mackey Award. He got one of my top three votes on my Mackey ballot.

Williams, a third-year sophomore from Waconia, has 25 receptions and leads all Big Ten tight ends in receiving yards (373) and receiving touchdowns (seven). He has accounted for 27.7 of all the Gophers' receiving yards.

Zander Diamont wasn?t supposed to playing this season as a true freshman. But transfer and injury forced him into the starting role at Indiana this year. And, he?s slowly getting better.

Last week, the freshman from Los Angeles in no way the resembled the newbie who was overwhelmed a month ago in a 56-17 loss to Michigan State. He didn't lead the Hoosiers to victory at Rutgers, but his performance was a highlight of a 45-23 defeat.

"He played well enough for us to win that game," offensive coordinator Kevin Johns said. "Now, he needs to manage the ball better and take care of it better in certain situations. But, man, he's settled down a little bit. We're trying to stay with concepts that he understands and that he can handle.

"He's practicing his butt off. He's studied a ton of film. So he's doing the right things it takes to get ready."

This is pretty cool: Des Moines will play host to 2016 NCAA tourney games.

Des Moines was named a host city on Monday morning of preliminary-round games of that year?s men?s basketball tournament. Games from rounds One and Two will be played at Wells Fargo Arena.