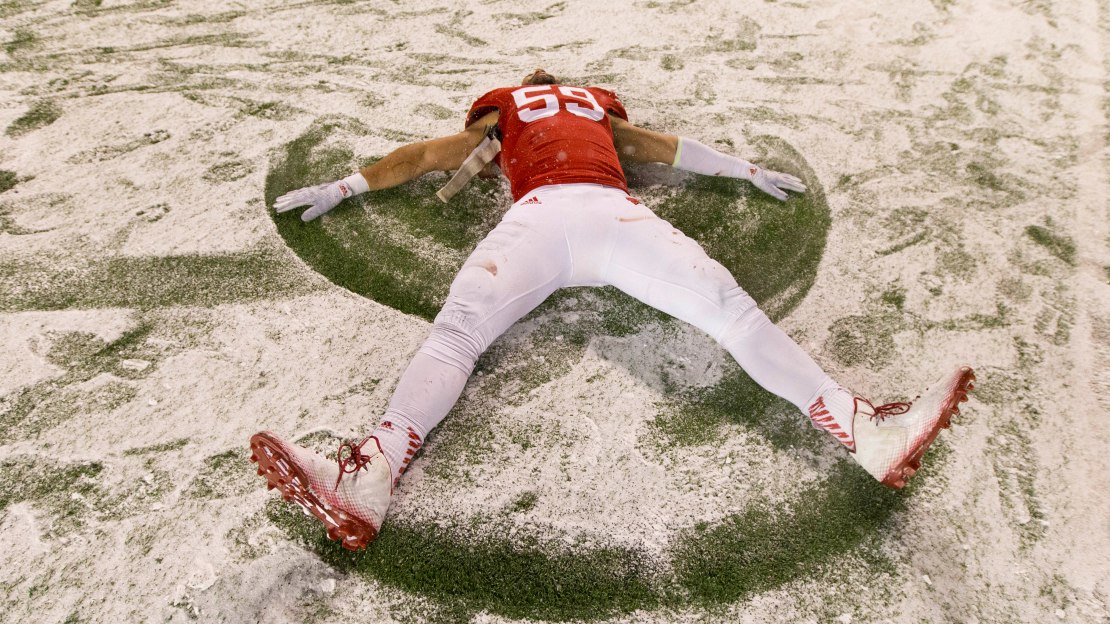 We all saw the snow this past weekend in Minneapolis and Madison. That got Doug Lesmerises  wondering if playing in snow and cold was a disadvantage for Big Ten teams compared to southern teams.

Regardless, Ohio State seemed to handle the conditions well. (And it was a lot of fun to watch, too!)

"We didn't think that the snow would be as continuous as it was,? said Ohio State offensive coordinator Tom Herman. ?We thought it might snow here and there. We felt like the wind wouldn't be that big a deal.

The college football world is still buzzing over Melvin Gordon?s 408-yard rushing effort on Saturday vs. Nebraska. Tom Oates of Madison.com says the performance was reminiscent of ?The Ron Dayne Game? in 1999. You recall that, right?

?The Dayne Game? was when he broke the NCAA career rushing record to all but sew up the Heisman Trophy and UW clinching a second consecutive Big Ten title with a 41-3 victory over Iowa in the final regular-season game.

Saturday, Gordon broke the major college single-game rushing record with 408 yards to thrust himself into the upper echelon of Heisman contenders and Wisconsin gave Gary Andersen his first signature win with a 59-24 rout of 11th-ranked Nebraska, one that put the Badgers in the driver?s seat in the Big Ten?s West Division.

Now, for another perspective on the big nights for Gordon and the Badgers ? Good take by Steve Sipple of the Lincoln Journal Star, who thought Bo Pelini?s program was beyond the embarrassing losses like the one it suffered at Wisconsin.

This game looked a lot like Wisconsin?s blowout of Nebraska in the 2012 Big Ten title game.

Here are some Twitter reactions about the Nebraska loss at Wisconsin from former Cornhuskers and other luminaries.

Donovan Smith came back and played for Penn State on Saturday. No doubt, the return of the left offensive tackle was a lift for a beleaguered line. Check out this video. PSU got to bowl eligibility last week. Everything from here on out is gravy for the Nittany Lions.

Just when you think Iowa is out the running in the Big Ten West, the Hawkeyes rise up.

Rick Brown of HawkCentral.com notes that had Iowa lost to Illinois, Hawkeye Nation would have been in complete and justified meltdown. Now, Saturday's 30-14 victory over an Illinois team that has won four Big Ten games since 2011 at least gave Iowa something to play for next week at Kinnick Stadium.

Here comes Wisconsin, with a full head of steam. Then Nebraska, warming up in the bullpen for a Black Friday visit. The Hawkeyes, 7-3 overall and 4-2 in the Big Ten, could still represent the West Division of the Big Ten in the Dec. 6 championship game with a pair of victories.

Amazing, isn?t it? Don?t try to understand it. Just marvel.

Despite forecasts of gloom and doom by many, Rutgers confounded experts by becoming bowl eligible with two games left. I?ll admit it: I didn?t think RU would make it, not playing a rugged schedule. But the Scarlet Knights got win No. 6 on Saturday vs. the Hoosiers.

Good thing RU beat Indiana, because getting win No. 6 on the road at Michigan State or Maryland would have been daunting.

The passing game for Minnesota that was so good in the win vs. Iowa struggled in the loss to Ohio State. At this point, things are what they are: The Gophers are basically a one-dimensional offense. And the schedule will offer no mercy with season-ending games at Nebraska and at Wisconsin.

The basketball season has barely started, but Michigan State has a big game vs. Duke on Tuesday in Indianapolis.

MSU didn?t look great in a 64-59 win vs. Navy the last time out, so this clash vs. the Blue Devils could be interesting.

"I'm looking forward to it because if we play like we did we'll get embarrassed, and that's sometimes a good thing," Tom Izzo said. "But I don't think that's going to happen."

I?m still trying to get a grip of the MSU team, which has four new players and lost key guys in Adreian Payne and Gary Harris.

Hoops is all about guard play. And Michigan has a nice duo in Derek Walton and Spike Albrecht. But the Wolverines needs Walton to be more aggressive with plans for the tandem often to play together.

"We're just trying to get as much experience on the floor as we can," John Beilein said Saturday after the team's 92-68 season-opening win over Hillsdale. "We're not tiny, we're still 5-11 and 6-foot there with those two, but at that point it can create some matchup problems. But if you look at our team, with the way the starting lineup is, about 40 percent of them are playing their first game.

"That's almost half the team. Any time we can get Spike in there with (Walton), we up that to 60 percent. And, they're both good players."