What did Tom Dienhart learn about the Big Ten in Week 12? Here's what! 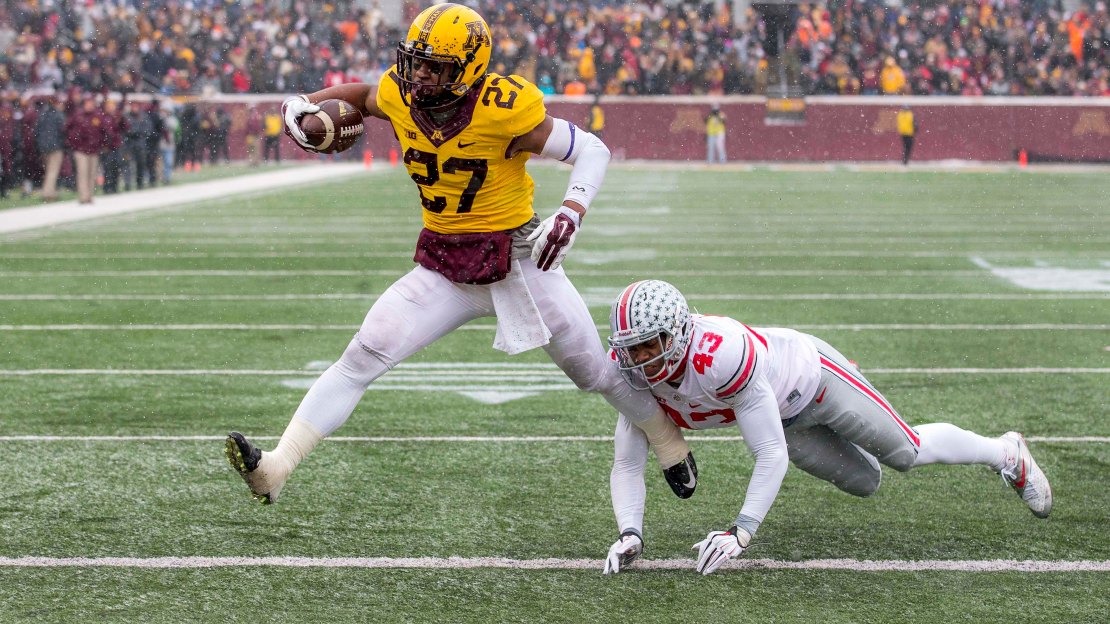 The Big Ten West race is coming down to the wire, with Wisconsin and Iowa in prime shape to take the pennant. But Ohio State looks like the team to beat overall.

1. Wisconsin and Ohio State look headed for a showdown in the Big Ten title game. The Badgers took control of the West by throttling Nebraska, 59-24. They control their destiny with games left at Iowa and vs. Minnesota. Win out, and Wisconsin will head to the Big Ten title game for a third time in four years. The Buckeyes grinded out a win at Minnesota and finish with home games vs. Indiana and Michigan. It?s difficult not seeing OSU winning out. It?s also amazing to think Urban Meyer has yet to lose a regular-season Big Ten game since getting the Ohio State job in 2012. I would love to see this Ohio State offense and Wisconsin defense lock horns. Stay tuned.

2. The more you watch Ohio State, the more you think it may be playoff-worthy. It wasn?t impressive or dominating, but Ohio State took care of business vs. a pesky Minnesota team in hostile conditions. OSU just needs to win out in home games vs. Indiana and Michigan and hope things take care of themselves. They did this past weekend, with Mississippi State and Arizona State losing and Florida State and TCU struggling. Honestly, are there really four teams in America better than this Buckeye bunch? C?mon.

3. Wisconsin?s Melvin Gordon sealed a trip to New York for the Heisman ceremony. In case you didn't hear, Gordon rushed for an NCAA single-game record 408 yards vs. Nebraska. Amazingly, Gordon did all of his work on just 25 carries (16.3 ypc) in three quarters vs. the No. 5 rush defense in the Big Ten (123.8 ypg). To me, the Heisman has become a two-man derby between Gordon and Oregon?s Marcus Mariota.

4. Big Ten Offensive Player of the Year will come down to Gordon and Ohio State's J.T. Barrett. Barrett, the redshirt freshman, continues to play beyond his years, hitting 15-of-25 passes for 200 yards with three TDs and a pick and running for a team-high 189 yards and a TD (11.1 ypc) in the Buckeyes? 31-24 win at Minnesota.

5. Northwestern has a good shot to get bowl eligible. That didn?t seem likely last week after the Wildcats suffered a fourth loss in a row. But NU shocked the world with a 43-40 overtime win at Notre Dame. At 4-6, Northwestern must win out to go bowling with games remaining at Purdue and vs. Illinois. I like NU?s chances.

6. Minnesota impresses by squeezing more out of its talent than any school in the Big Ten. The Gophers pushed a much more talented Buckeyes team all afternoon before finally succumbing, 31-24. Jerry Kill has something going. He just needs more time-and better facilities. I hope he gets both. It will be interesting to see how the Gophers finish. No league school has two tougher remaining games: at Nebraska and at Wisconsin.

7. Nebraska?s offense gets ordinary if Ameer Abdullah isn?t on top of his game. He still was dealing with the effects of knee injury suffered vs. Purdue on Nov. 1, running 18 times for 69 yards in the loss at Wisconsin. His long run was 13 yards. Exasperating matters is the fact quarterback Tommy Armstrong Jr. is struggling mightily. The last two games, he has hit 14-of-39 passes (36 percent) for 180 yards with two touchdowns and three interceptions. How will the Huskers respond the last two games coming off an ugly loss in Madison that looked eerily similar to some of the brutal defeats this program suffered the last two years?

8. Minnesota?s David Cobb doesn?t get his due. He carried 27 times for 145 yards and three TDs. He has six 100-yard games this year (2, 200-yarders) and ran for 97 yards in another. And Cobb does all of this with little consistent support from the Minnesota pass game, which came into Saturday last in the Big Ten. Too bad he often gets lost in the shuffle amid a collection to top league running backs that also includes Melvin Gordon, Ameer Abdullah, Tevin Coleman and Jeremy Langford.

9. Iowa is still in the thick of the Big Ten West race. The Hawkeyes have been all or nothing the last three weeks, and they are fresh off an impressive 30-14 win at Illinois. Iowa is 4-2 in the Big Ten, with home games left vs. Wisconsin and Nebraska. If Iowa runs the ball like it did vs. Illinois-a season-high 304 yards-it may be a factor in the race. Amazing, huh?

10. Penn State is bowl eligible. And that?s a great first step for the program in its first season under James Franklin, who has had to deal with a short roster all season. Penn State was reeling with a four-game losing skid after opening the season 4-0. Now, the Nittany Lions have won two in a row with games left at Illinois and vs. Michigan State. Everything from here on out is gravy for PSU. I can?t wait to see where this program is in another year or two. Pretty exciting.