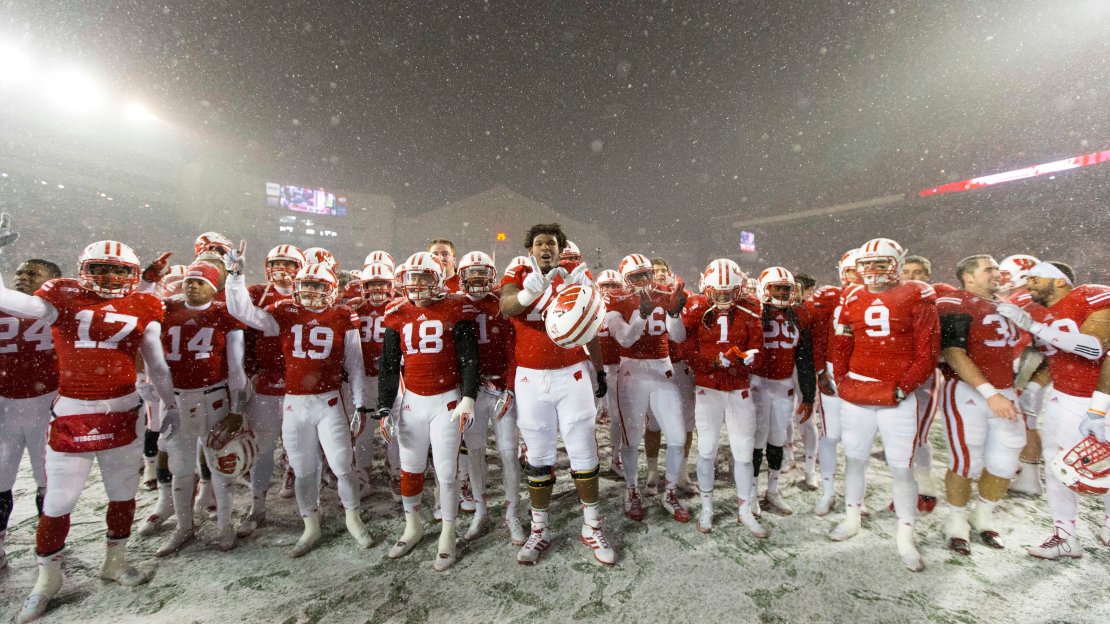 Week 12 is in the books. And one thing is becoming clearer: Ohio State and Wisconsin look to be on a path to meet in the Big Ten title game.

Here?s a look at what went on this Saturday, highlighted by some big rushing performances–again. Hello, Melvin Gordon!

Biggest surprise: No one saw Northwestern winning at Notre Dame. But the Wildcats shocked the world with a 43-40 overtime victory in South Bend. This was a listing NU team that had lost four games in a row with an offense that entered the day last in the Big Ten in scoring (18.0 ppg). The 43 points were a season-high. The Wildcats are 4-6 and need to win out to go to a bowl, with games left at Purdue and vs. Illinois.

Biggest disappointment: Nebraska. The Cornhuskers came into their Big Ten West showdown with big expectations. Alas, Nebraska got smoked, 59-24, at Wisconsin. The Huskers allowed 627 yards of offense. After leading 17-3 early in the second quarter, Nebraska was outscored, 56-7. The loss pushed the Huskers out of first place in the West and put Wisconsin in control of the division.

Play this again: The Northwestern at Notre Dame game was one for the ages. The Irish were trying to run out the clock when they fumbled with 1:28 left in the game. NU recovered and subsequently kicked a game-tying 45-yard field goal with 19 seconds left. The Wildcats then won in overtime on a 41-yard field goal after the Irish missed a field goal on their first OT possession.

Never play this again: Penn State?s 30-13 win vs. Temple wasn?t exciting. Neither offense was great, and they teams combined for eight turnovers.

Ohio State. Yes, it was close, but the Buckeyes found a way to grind out a tough win in harsh 15-degree conditions at Minnesota, 31-24. It was the coldest temperature for an Ohio State game since 1960. This team will finish the regular season with home games vs. Indiana and Michigan. The Big Ten East title is in OSU?s sights.

Iowa. The Hawkeyes beat Northwestern, 48-7; lost at Minnesota, 51-14; prevailed at Illinois, 30-14. This team is maddeningly inconsistent. Regardless, a win helps get Iowa back on track and keeps it in the thick of the Big Ten West race with a 4-2 record and home games left vs. Wisconsin and vs. Nebraska.

Penn State. The Nittany Lions have won two in a row after a four-game slide. And the win over Temple made Penn State bowl eligible, with the defense excelling once again by allowing only 248 yards (61 yards rushing) and eight first downs.

Rutgers. The Scarlet Knights ended a three-game skid with a 45-23 win vs. Indiana. Even better, the victory made RU bowl eligible for the ninth time in 10 years.

Illinois. The loss at home to Iowa was the Illini?s sixth of the season, putting them on the precipice of missing a bowl with games left vs. Penn State and at Northwestern. The Illini had just 235 yards despite the return of Wes Lunt from a broken leg. He threw for just 102 yards. And the defense was ripped for 587 yards (304 rushing). That?s five losses in six games for Illinois.

Minnesota. That?s two losses in three games for the Golden Gophers, who fell for the 37th time in the last 39 games vs. Ohio State. The one-dimensional offense vs. OSU limited Minnesota, as it had just 85 yards passing. The Gophers are 4-2 in the Big Ten, still in the hunt for the West title. But games remain on the road at Nebraska and at Wisconsin.

Indiana. The Hoosiers have lost five in a row. Worse yet, the 45-23 loss at Rutgers was Indiana?s seventh of the season, knocking it from bowl consideration. That?s seven years in a row without a bowl for IU.

Wisconsin RB Melvin Gordon. He set a FBS single-game record with 408 yards rushing. He did it on 25 carries (16.3 ypc) with four TDs. And he didn?t even play in the fourth quarter. Incredible.

Northwestern K Jack Mitchell. The sophomore forced overtime with a 45-yard field with 19 seconds left in regulation, and he gave the Wildcats the thrilling win with a 41-yarder in the extra session. Mitchell finished with four field goals, all of which were longer than his previous career high of 29 yards.

Tevin Coleman RB Indiana. The Hoosiers lost at Rutgers, but Coleman ran 32 times for 307 yards and a TD. The effort was second-best in school annals to Anthony Thompson?s 377-yard effort in 1989. He had his fourth rushing TD of over 60 yards on the season, too, and eclipsed the 100-yard rushing mark for a ninth time in 2014.

J.T. Barrett QB Ohio State. Another week, another big game for the redshirt freshman. He completed 15-of-25 passes for 200 yards with three touchdowns and a pick. Barrett was even better on the ground, leading the team with 189 yards on 17 carries with a TD (11.1 ypc). One of his runs was an 86-yard TD jaunt.

Jeremy Langford RB Michigan State. He ran 25 times for 138 yards and two touchdowns. That is seven 100-yard rushing games in a row for Langford; and 14th in succession vs. Big Ten foes.

Marcus Trotter, LB, Wisconsin. Trotter tallied a game-high 12 tackles, a sack and a fumble recovery in Wisconsin's resounding victory over Nebraska. He did snow angels after the game to celebrate.

627, yards of offense for Wisconsin, with 581 coming on the ground.

304, rushing yards for Iowa at Illinois, which was a season high. The Hawkeyes entered the day ranked No. 9 in the Big Ten in rushing (147.7 ypg).

289, yards rushing for Ohio State, which averaged 7.6 yards per carry.

254, yards rushing for Penn State, which were a season-high.

50, total points Northwestern had scored in its four games prior to playing at Notre Dame. NU scored 43 on the Fighting Irish.

46, yards passing for Wisconsin. It didn?t matter, as the Badgers had 581 yards rushing.

22, Big Ten regular-season wins in a row for Ohio State.

11, receptions for Indiana?s Shane Wynn, which went for 120 yards and a score.

10, catches for Northwestern?s Kyle Prater. One was for a TD.

9, Big Ten road wins in a row for Michigan State, a school record

6, yards rushing for Maryland on 17 carries vs. Michigan State.