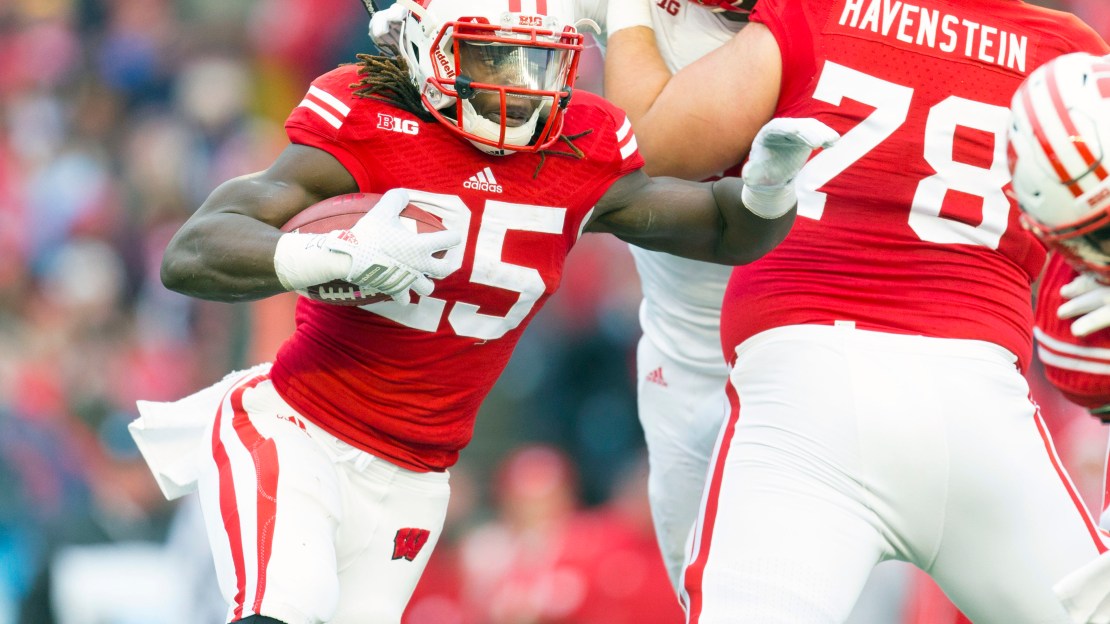 Week 12 of the college football season is in the books. Big Ten fans were treated to seven games, highlighted by Wisconsin's impressive 59-24 victory over Nebraska. In addition to several outstanding games, there were also plenty of exceptional individual performers.

1. Melvin Gordon, RB, Wisconsin. Gordon had one of the most memorable individual performances in college football history on Saturday. The Badgers' junior back rushed for 408 yards and four touchdowns, which broke the FBS record for rushing yards in a single game. Gordon now has 1,909 rushing yards on the season, which is the fourth-best in school history. This guy is the top running back in the country and should be a lock as a Heisman Trophy finalist this season.

2. Tevin Coleman, RB, Indiana. Coleman's outstanding day was overshadowed by Gordon, but don't be fooled, this guy was nothing short of outstanding on Saturday. Coleman rushed for a career-high 307 yards and a touchdown in Indiana's 45-23 loss at Rutgers. Coleman's 307 yards are the second-highest rushing total in school history, trailing only Anthony Thompson's 377-yard in 1989.

3. J.T. Barrett, QB, Ohio State. This talented redshirt freshman QB continues to get better every week. Barrett was outstanding again on Saturday in Ohio State's 31-24 victory over Minnesota. The Buckeyes' signal caller passed for 200 yards and three touchdowns, while also adding 189 rushing yards and a score, which broke Braxton Miller's record for the most rushing yards in a game by a quarterback. Barrett has accounted for 38 touchdowns this season, breaking the school record of 36, which was also set by Miller last season. What a special talent.

4. David Cobb, RB, Minnesota. Cobb continues to make his case for being one of the top running backs in the country. The Gophers' senior back ran 27 times for 145 yards and three touchdowns in Minnesota's 31-24 loss to Ohio State. Cobb has now topped the 100-yard mark in six games this season.

5. Jeremy Langford, RB, Michigan State. Langford was one of several running backs who had phenomenal individual performances on Saturday. The Spartans' senior back carried the ball 25 times for 138 yards and two touchdowns as Michigan State cruised to a 37-15 win over Maryland. Langford has now rushed for 100-plus yards in 14 straight Big Ten games, which is the longest streak in the nation.

6. Justin Jackson, RB, Northwestern. This true freshman shined bright in the spotlight on Saturday. Jackson rushed for 149 yards and a touchdown as Northwestern pulled off the upset over Notre Dame. This guy has now topped 100 total yards in five of his last six games. That is impressive.

7. Jack Mitchell, K, Northwestern. Mitchell is the first kicker to appear on this list this season, but he earned it. This guy hit four field goals on Saturday, including a 45-yarder with 19 seconds left in regulation, which sent the game into overtime. He then hit a 41-yard field goal to give the Wildcats a 43-40 win over No. 15 Notre Dame. All of Mitchell's four field goals were longer than his previous career high of 29 yards.

8. Marcus Trotter, LB, Wisconsin. Trotter was all over the field on Saturday in Wisconsin's 59-24 win over Nebraska. The Badgers' senior linebacker recorded 12 tackles, a sack and a fumble recovery in this Big Ten West clash. Trotter is the leader of a Wisconsin defense that has been among the best in the nation this season.

9. Leontee Carroo, WR, Rutgers. This guy is a big-play machine. Carroo hauled in five catches for 125 yards and two touchdowns in Rutgers' 45-23 victory over Indiana on Saturday. Carroo has now topped the five-catch, 100-yard mark on five different occasions this season. He continues to put up all-Big Ten caliber numbers for the Scarlet Knights.