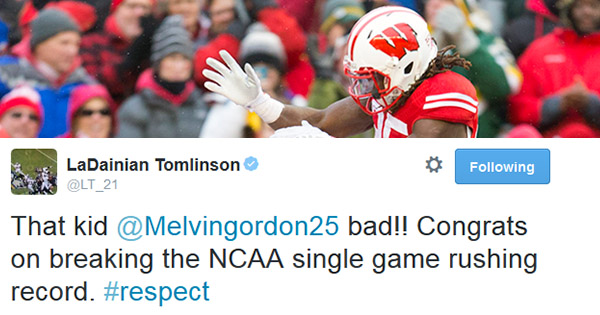 Any time a player does something as great as what Melvin Gordon did Saturday afternoon, it's going to get more than its share of attention on social media.

So, to no surprise, pretty much everyone had something to say about Gordon's NCAA-record 408 yards rushing in Wisconsin's 59-24 win vs. Nebraska.

Fans, media, the Wisconsin family and the NFL world chimed in on Gordon's record-breaking and eye-popping statistical day.

Remember: Gordon didn't play at all in the fourth quarter, so it's anyone's guess how many yards he could have amassed.

Could he have reached the 500-mark? We'll never know, but there's no possible way to downplay the Week 12 effort; it's something we'll be talking about forever.

As you can see, we focused on the Wisconsin and NFL families. Hey, we had to draw the line somewhere, or the post would never end.

Congratulations @Melvingordon25! In front of every great RB is a great offensive line & fullback. Couldn't be more proud of @DerekWatt34!

Shout out to @Melvingordon25 for the record tonight. Even BIGGER shout out to the beef up front blocking! @KCostigan54 @RobBigDaddy78 #beef

Congrats @Melvingordon25 what a day to remember! Great player and an even better person! Congrats bro! @BadgerFootball

@Melvingordon25 just beat the NCAA rushing record in 3 quarters… If that doesn't scream Heisman, I guess I never know what will #GOAT

Congrats to my man @Melvingordon25 on breaking the rushing record! And it only took 3 quarters!

Congrats to @Melvingordon25 and the Offensive Line. The tradition continues. #OnWisconsin

Congrats to @Melvingordon25 and the Wisconsin OLine for setting the single game rushing record! #badgers #GordanToGotham

Are you kidding me with Melvin Gordon's stat line??!! #Wisconsin

Melvin Gordon is a Beast!!! I don't think there will be any problems seeing RBs in the 1st round in next year's draft

Gordon for Heisman!! Against a stout Nebraska defense…