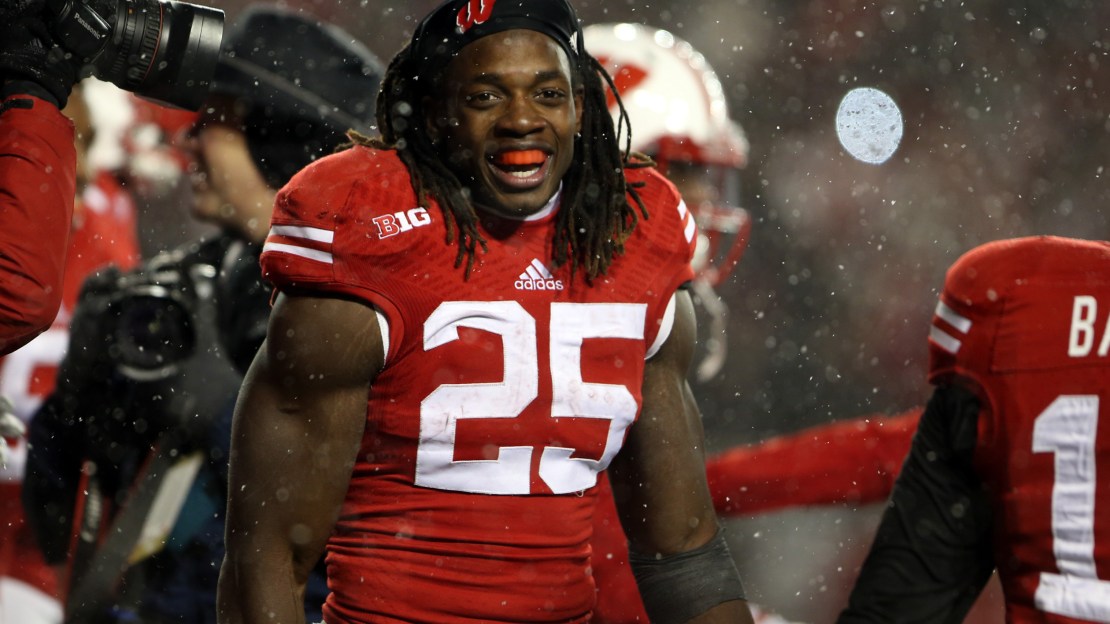 42 yards ? 62 yards ? 39 yards ? 44 yards ? 43 yards ? 68 yards. It was dizzying watching Gordon zigging and zagging through the Nebraska defense-often in spectacular fashion with a wicked blend of power of speed.

But it was an innocuous 26-yard touchdown run late in the third quarter that will go down as the one that put Gordon in the history books. It was Gordon?s 25th rush of the day. More importantly, it pushed his rushing yards to 408.

"Yeah, I didn't even know I was close to the record," Gordon said. "I was kind of just running away."

It was a performance for the ages for Gordon, who averaged 16.3 yards per carry and scored four touchdowns in also breaking the Big Ten single-game rushing mark of 377 yards, set by Indiana?s Anthony Thompson in 1989.

"You never know when you'll have a special day," said Gordon. "That's pretty much all I can say."

Tomlinson knew how special the day was; in fact, he tweeted congratulations Gordon's way immediately after the Badger star broke his record of 406 yards, set in 1999.

So, Wisconsin is now home to the NCAA career rushing leader in Ron Dayne (6,397), single-game leader in Gordon and the career leader in rushing (77) and totals touchdowns (83) in Montee Ball.

Ball let the world know about Wisconsin's rich running back history with this tweet:

?Everything he gets, he deserves,? said linebacker Marcus Trotter. ?I?m his teammate, but I?m definitely a fan. I love watching him play.?

And this stunning effort just may be a performance that wins the Heisman Trophy for Gordon, an honor Dayne won in 1999. And to think Gordon almost opted to turn pro after running for 1,609 yards last season. At the very least, this performance sealed a trip to New York for the Heisman ceremony, as Gordon?s best competition looks like Oregon quarterback Marcus Mariota.

Gordon has 1,909 yards rushing with two regular-season games to go-and maybe two more in the Big Ten title game and bowl game. How many yards will he end up with? Gordon is averaging 190 yards. So, logic dictates he could have over 2,600. Barry Sanders is the record holder with 2,628 in 1988. Gordon needs 720 for the mark.

Perhaps most amazing about Gordon?s day was he did all of his work in a scant three quarters. That?s right: He didn?t even play in the fourth quarter. Who knows? Gordon may have eclipsed the 500-yard rushing mark had he kept playing. But he wasn?t needed in this 59-24 blowout vs. Nebraska.

"I think he's the best of the best," said Badger coach Gary Andersen. "But this football team was great today."

Gordon had six carries for 49 yards after one quarter and then exploded for 359 yards on 19 carries in the second and third quarters. Yes, Gordon had two fumbles and his team was losing 17-3 early in the second quarter. But Gordon and the Badgers put all of that behind them and rolled to victory in a Big Ten West showdown.

Seemingly lost amid the hoopla of Gordon?s historic performance was the fact Wisconsin is in control of the Big Ten West. This win improves the Badgers to 5-1 in the conference (8-2 overall), putting them alone in first place. Wisconsin will finish the season playing at Iowa next week before welcoming Minnesota in the finale. Win both, and the Badgers will go to the Big Ten title game for the third time in four years. And a matchup with Ohio State could loom. But let?s not get too far ahead of the curve.

Wisconsin?s two-quarterback system and its potential pitfalls were rendered moot on this cold Madison afternoon. Joel Stave? Tanner McEvoy? Thornton Melon could have been quarterbacking the Badgers on this day. It didn?t matter. (For the record, Wisconsin hit 7-of-11 passes for 46 yards and a touchdown.)

By the time snowflakes filled the air above Camp Randall Stadium in the fourth quarter, Wisconsin was well on its way to a convincing win that produced 581 throat-stuffing yards rushing and 627 yards overall in a contest plagued by nine turnovers (five by Nebraska; four by Wisconsin).

?I think we proved that this team is for real and that we are going to work hard through the postseason to keep proving it,? said Trotter.

Also lost among the deserved hoopla surrounding Gordon?s historic day was the continued great play of the defense. The unit entered the day No. 1 in the nation in total defense (251.1 ypg). The Badgers also were No. 3 in the nation in scoring defense (14.3 ppg). And, it showed its teeth on this day, holding Nebraska to 180 yards after it entered the game No. 3 in the league in total offense (490.6 ypg).

Ameer Abdullah didn?t look 100 percent after injuring a knee on Nov. 1 vs. Purdue. He had 18 carries for 69 yards. And quarterback Tommy Armstrong struggled, completing 6-of-18 passes for 62 yards with a touchdown and pick.

But this day belonged to Gordon, whose name was chanted by fans in the second half on his record-setting day. Where does he belong in the pantheon of great Badger backs that includes Dayne, Brent Moss, Anthony Davis, Alan Ameche, Brian Calhoun, Billy Marek, Terrell Fletcher, Michael Bennett and P.J. Hill, among others? Is Gordon the best of them all?

"It's a luxury that I've never had before as a coach," Andersen said of having a weapon like Gordon. "To see a performance like that was amazing.

He's also in the history books.