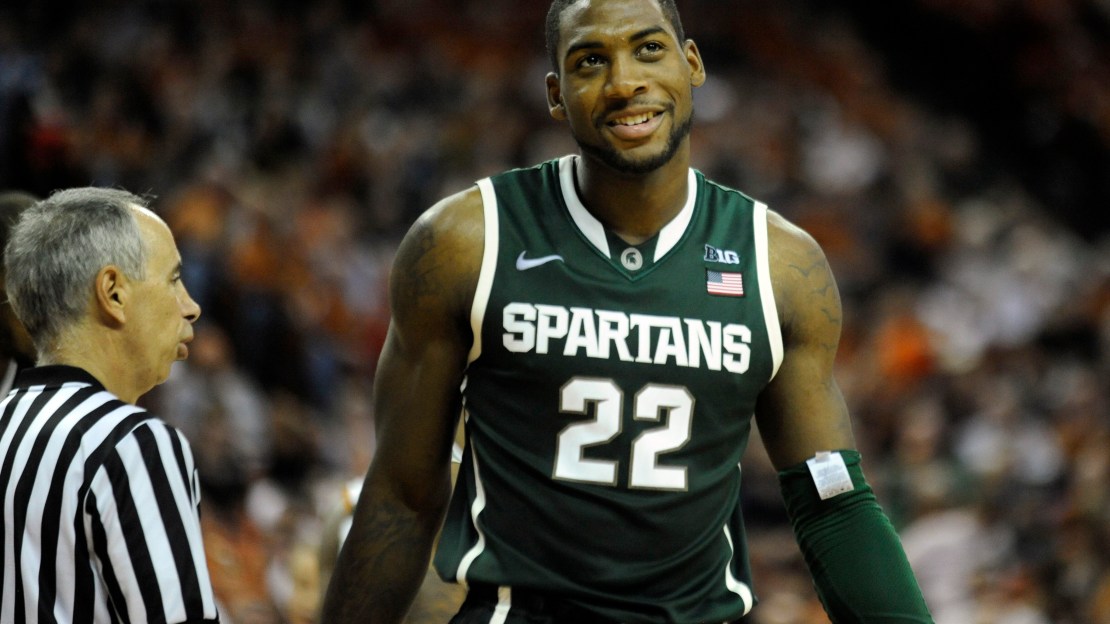 It?s the hashtag that Michigan State?s Branden Dawson puts at the end of his social media posts. But it?s the message within that hashtag which motivates Dawson as he prepares to enter his senior season in East Lansing.

?I think it goes great with our team this season,? Dawson said. ?People always come after us because we?re Michigan State. They always play their best when they play Michigan State. We may not be ranked as high coming into the season, but our goals stay the same. Our goal is to win a national championship this season. It?s been that way since I arrived here my freshman season.?

Since that time, to understand the frequency with which the slogan has been attached to Dawson?s name, go back to his youth. Raised in Gary, Indiana, growing up was not a fond memory for Dawson. His father spent time in and out of prison during his childhood, while he admitted regularly witnessing gang activity and hearing gunshots on a frequent basis.

?I pray every night,? Dawson said. ?It?s a true blessing to be in a position I am now.

?Growing up in Gary, there are people that want to play basketball, but they don?t want to take on that responsibility of going to the next level and playing in college. It?s easy to play sports growing up there, but the hard part is staying away from trouble.?

Basketball provided an outlet for Dawson, who developed into a top 25 national recruit by the time his senior year came around. He was named a McDonald's All-American that year, an honor that he said really changed his life.

?That?s when it really hit me and I knew this was something I could really be successful at,? Dawson said. ?From that point on, I told myself I was going to change my mindset and really focus on this game and try to make it. I became a more responsible person.?

During that time, Dawson faced another major responsibility: the birth of his son. He was a junior at Lew Wallace High School when My'Shawn James Dawson was born. Balancing basketball with fatherhood wasn?t easy for Dawson. His son was raised in Indiana, but would spend time in East Lansing with Branden, as well.

Heading into his final season in high school, Dawson had received offers from some of the top college programs, including UCLA, Georgetown and hometown schools Indiana and Purdue.

But it was Michigan State that stood out to the strong, talented, rough-edged kid.

One of those players is fellow senior Travis Trice, who grew up playing AAU basketball with Dawson for SYF Players.

?I remember those days, and now, it?s kind of the same thing,? Trice said. ?We?re going to be looked at as the leaders of this year?s team."

Dawson, ranked by many as being one of the top high school players in the nation, says he realized after his freshman season how valuable the game of basketball was. He suffered a torn ACL in the final regular-season game of his freshman year, which allowed him to watch the game from a different point of view.

?You never want to see a kid get hurt, but I think that injury was a positive for him,? Izzo said. ?It made him appreciate the game more. Not a lot of great players can handle such a serious injury better than he did.?

Dawson describes the injury as being the biggest challenge of his basketball career, one that has had plenty of ups and downs.

?It was hard? It really was,? Dawson says and he lets out a sigh. ?It changed my approach and my mindset to the game of basketball.

?I began watching more film, talking more with my teammates, and, really, just taking all advice to heart. When you put so much into a game, it?s really hard to leave it and be away from it for so long.?

Dawson returned from the injury and was on the court to start his sophomore season. He continued to grow and improve throughout his sophomore year and into his junior season, but he never averaged more than 11.2 points per game, and his expected honors and accolades went to others.

When you first arrived at Michigan State, he is asked, how long did you think you would stay at MSU before making the jump to the NBA??

?I never thought I was going to be one-and-done,? he says. ?Maybe my sophomore or junior year.?

Instead, Dawson is finishing his fourth and final season at Michigan State. Tonight will be his last college season opener, his last chance to play in a Final Four, like so many of his former teammates had when he first arrived on campus.

He remembers back to when he got to Michigan State and would constantly ?butt heads? with Izzo in practice.

?When I first got here, that was happening all the time,? Dawson said. ?As the years went on, we began talking every night and we developed a great relationship.?

Izzo expresses the same gratitude and compliments toward his senior forward.

?From Day One, I have always said, 'He?s got more to give.' He?s had to learn to not worry about as much of what you can?t do, but instead, worry about what you can do.?

The dream of playing in a Final Four is what drives Dawson to get better every day. But entering his senior season, the odds and the clock are against him.

This past summer, Dawson posted a photo of himself posing with his teammates after an offseason workout.

The caption read, ?Some teams work harder in the preseason?

And of course, below that?

Great workout today with my brothers! "Some teams work harder in the preseason" @etthehiphoppreacher....#Indy #strive4GREATNESS #whynotus