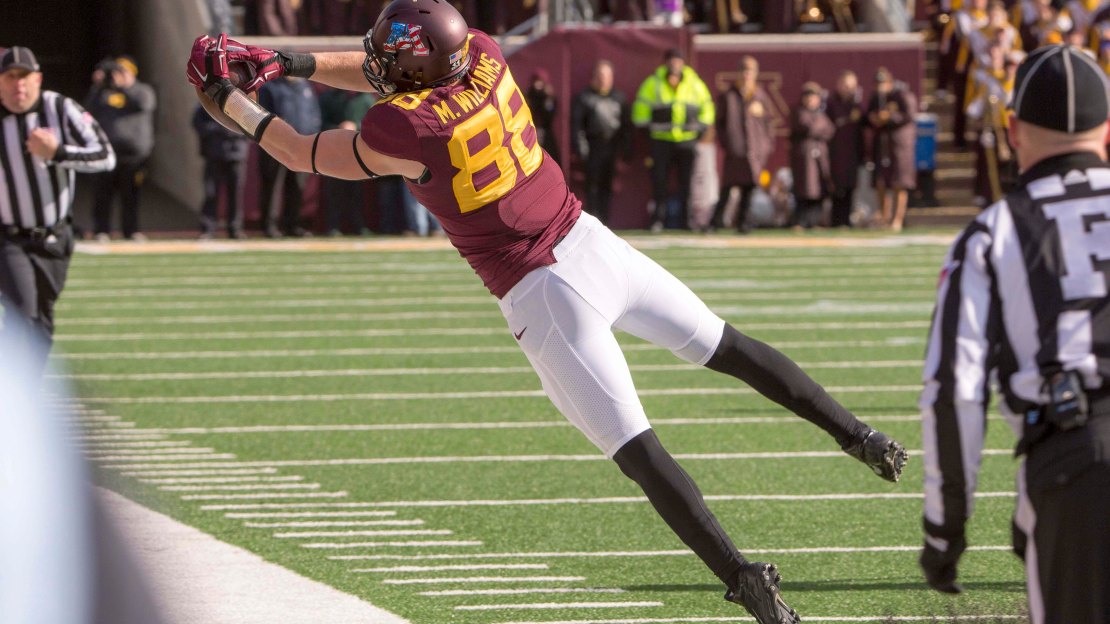 Is there a better tight end in America than Minnesota?s Maxx Williams? I think not. Here is a nice story on the Gopher star.

Williams leads the team with 22 receptions and 326 yards. His seven touchdowns are tied for most in the nation for tight ends. At 6-4 and 250 pounds with plenty of athleticism, he's a difficult player to cover for most linebackers and safeties. Remarkably, he barely played tight end at all until his redshirt season in 2012. Just think of how good he?ll be as gains more experience. Exactly.

Great feature story on Michigan coach John Beilein by Brendan F. Quinn of Mlive.com. Beilein has some personnel issues to answers on this year?s team, chief among the finding production from his big men. But I have a feeling he?ll have his team rolling by late February built around Caris LeVert. Beilein is the ultimate dues-payer, a guy who worked his way up the backwaters of the sport to rise to the top of his profession.

On the football front, Michigan is on the precipice of becoming bowl eligible. But to get over the hump, the Wolverines need wideout Devin Funchess to play better.

As this story points out, Funchess was dominant in the first half of the Appalachian State game when he scored three touchdowns. Since then he has just one, and each week he seems to regress. He has had only one 100-yard game - in the Week 2 blowout loss to Notre Dame - and had his lowest production of the season in Saturday's 10-9 win over Northwestern: two catches for 23 yards. What?s up?

Love this story on former Purdue coach Gene Keady by Gregg Doyel of IndyStar.com. Only a guy like Doyel can capture the essence of what was once Keady?s epic comb-over coif. Man, do I miss Keady.

Nebraska as the ultimate college football dark horse for a playoff spot? Sounds about right. Really.

Don?t sleep on the Cornhuskers, who are lurking in the weeds in the playoff chase. The Huskers (8-1) have one loss-a "good" one, if you will-on the road at Michigan State. They also have a solid non-conference win over Miami (Fla.). That's more than Mississippi State and Ohio State can say. Bleacher Report is spot-on with this.

Few teams are coming off a tougher four-game stretch than Purdue, which played to and lost to Michigan State, Minnesota, Nebraska and Wisconsin. But Darrell Hazell thinks his team is getting better. And, he?s correct.

This team still needs some major talent upgrades, especially at receiver and everywhere on defense. This will continue to be a slow build for Hazell. But, he?s on track. Be patient.

Iowa is 6-3. But, it?s not a pretty 6-3, as the Hawkeyes have losses to the likes of Iowa State and Maryland in addition to getting trampled at Minnesota last week. The offense really struggled in the Twin Cities, gaining a meager 205 yards. Now comes a trip to Illinois that suddenly looks a bit dangerous. Here?s a good look at some key numbers for Iowa to this point.

The inability to stop the run has been most alarming to me. In conference play, Iowa?s rushing defense is allowing 201.6 yards per game. Yielding that many yards each Saturday has allowed teams to basically abandon the pass while also chewing up the clock. Not good.

How good is Ohio State QB J.T. Barrett? Pretty darn good. This database put together by Cleveland.com shows that Barrett is on pace to set the school standard for single-season passing yards. Plus, he has both the top career and season passer ratings. Check it out. You?ll be impressed.

That 13-10 home loss to Penn State back in early September still sits lingers with the Rutgers players. Talk about a missed opportunity.

Dan Duggan of NJ.com notes that the Penn State matchup was one of the most hyped games in Rutgers history. It was the program's first Big Ten game, and there was plenty of bad blood to lay the foundation for a rivalry with "the team from Pennsylvania."

"It stings. It's always going to sting," defensive tackle Darius Hamilton said. "It's one of those atmospheres that you'll never forget. It was one of those once in a lifetime things. It was the first Big Ten game. But it's definitely a learning experience and we have to keep pushing."

Nice to see Darius Paul back at Illinois.

Paul sat out last season at Illinois after transferring from Western Michigan where he was the Mid-American Conference?s Freshman of the Year in 2012-13. Marcus Jackson of the Champaign News-Gazette says that rather than sit another full season without playing, Paul took a recommendations from Illinois assistant coach Dustin Ford to spend this season playing at Lamar State to stay sharp on the court, as well as shore things up off the court in light of the arrest last spring in Champaign that resulted in his suspension.