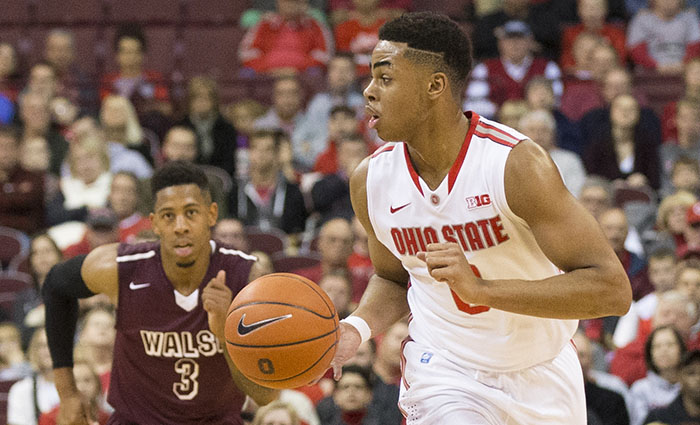 The lid will be taken off the basketball season on Friday with a full slate of games. There has been plenty of analysis leading up to this point for a conference that looks to once again be among the best in the nation.

Indiana battling to get back to the NCAA tourney. The Hoosiers missed the Big Dance last season with a 17-15 overall mark and 7-11 Big Ten slate. Gotta love the talent and potential in a backcourt led by diminutive Yogi Ferrell. Keys will be how well big man Hanner Mosquera-Perea develops-along with a collection of promising newcomers led by electric James Blackmon and Robert Johnson in the backcourt for what will be a guard-heavy lineup.

Michigan State moving on without Adreian Payne and Gary Harris. Did any school in the Big Ten lose two better players? Payne seems like he was in East Lansing for a decade. Harris was a talented wing athlete who could do a bit of everything. The Spartans have some options on the wing with guys like Branden Dawson and Denzel Valentine-who must take their game up a notch–but the interior production may be an issue.

Wisconsin staying hungry. Go ahead. Try to find a major weakness for what was a Final Four team last season. You really can?t. Sure, Ben Brust must be replaced, but this is a talented and deep roster. The Badgers will be the hunted from Day One. How will the team deal with that? The weight of lofty expectations has been the undoing of many teams.

Ohio State folding in the Big Ten?s best collection of newcomers. This could be the second-best team in the conference if a raft of talented youngsters is as good as advertised. D?Angelo Russell is billed as the Big Ten?s top freshman. Anthony Lee is a Temple transfer who may be the answer to the Buckeyes? prayers for interior production. A seventh NCAA bid is a given-even without heart-and-soul guy Aaron Craft. How deep can this team go in March?

Nebraska bidding for its first NCAA tourney win-ever. It?s true: The Cornhuskers have never won a game in the Big Dance. But that could change in 2015 for Tim Miles. Seven of Nebraska?s top eight players are back from a club that reached the NCAA Tournament last season for the first time in 16 years. Keys will be limiting turnovers and rebounding better. No more storming-the-court after big wins-they now are expected. The ?scrappy underdog? storyline has been waded up and replaced with the burden of expectations.

Richard Pitino trying to avoid the sophomore slump. You had to be impressed by the kid coach?s debut, as he navigated Minnesota to the NIT title. Mock the NIT, if you will, but it was a nice first step for Pitino in his stewardship of the Golden Gophers. For his next act: Get Minnesota to the Big Dance. And you have to like his chances with the return of senior starters Deandre Mathieu, Elliott Eliason and Andre Hollins. Plus, a nice assemblage of newcomers will up the athletic ability. Don?t sleep on this team.

Michigan?s developing up front. The Wolverines are counting on the likes of Mark Donnal and Kameron Chatman to make a move along the front line to give the team a presence inside on both ends of the court. Gone are Mitch McGary, Jon Horford and Jordan Morgan. Michigan may have some bumps in the road in November and December, but there?s enough athletic skill with the likes of Caris LeVert to push this team into the NCAA tourney. Amazing when you consider John Beilein has lost four NBA first-round picks in the past two years.

Iowa taking the proverbial next step. Fran McCaffery got his crew to the NCAA Tournament last season, which was a breakthrough. But the Hawkeyes wheezed across the finish line, losing seven of their final eight. Iowa has plenty of talent back to come at teams relentlessly once again. Aaron White remains the best player no one has heard of for a team that must defend and rebound consistently.

Maryland and Rutgers coming aboard. The Big Ten is now a 14-team league. Each program has work to do. The Terrapins are in better shape with an outside shot to earn the program?s first bid to the Big Dance since 2010. The key will be the play of a talented group of newcomers. One-Melo Trimble-will call the shots from the point. He needs to be as good as advertised. The Scarlet Knights figure to have a rough debut, likely to miss the postseason. But don?t be shocked if they beat a team or two on their home court that you don?t expect.

Purdue becoming, well, Purdue. This once-proud program has fallen hard in recent years, finishing in the cellar last season. Was that rock bottom? Spotty leadership, an inability to shoot and lack of commitment on defense have been chief among the issues in West Lafayette. Yes, big man A.J. Hammons looks good. But the Boilermakers will rise and fall on the play of their guards-not their big man. Colorado State transfer guard Jon Octeus-a fifth-year transfer who originally was headed to UCLA–has to be a major contributor.