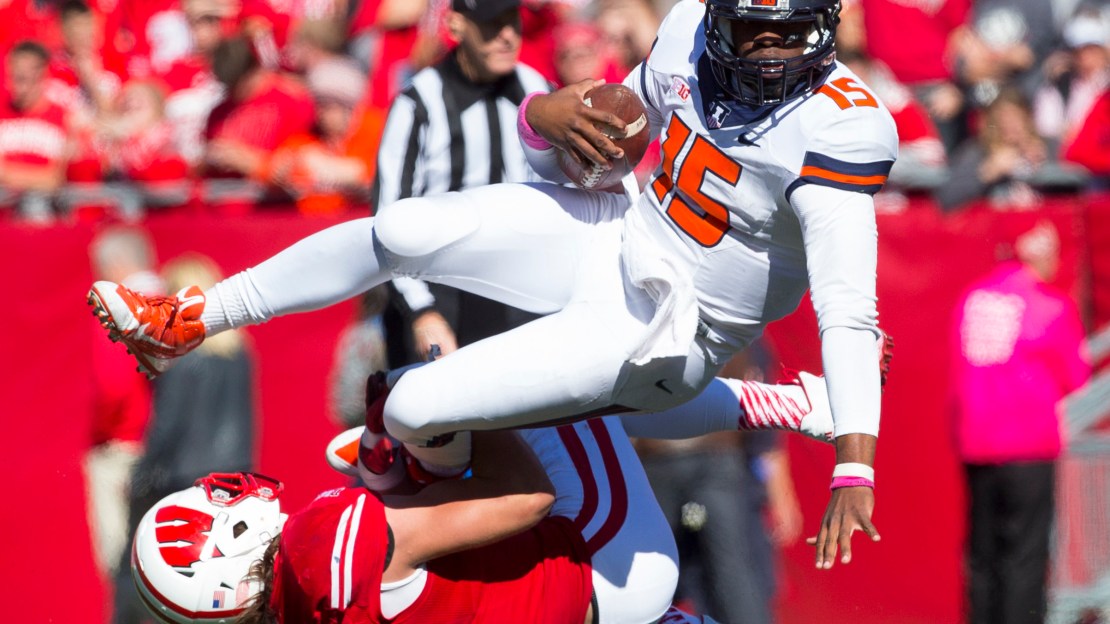 No discussion of Wisconsin is complete without talking about DC Dave Aranda, whose unit is among the best in America. Jesse Temple of FOX Sports Wisconsin has a nice story on the rising star coach who is nicknamed the ?Professor.?

Temple notes that during his two years at Wisconsin, the Professor has quietly become one of the most celebrated assistants in college football because of the intelligence and effectiveness of his defenses. This season, Wisconsin ranks first nationally in total defense (251.1 yards per game), third in passing defense (156.8), fifth in rushing defense (94.3) and third in scoring defense (14.3 points per game).

The Michigan search for an A.D. plods along, as school president Mark Schlissel is taking his time on the search for Dave Brandon?s replacement.

I know getting the right guy is vital. I just wonder how the pace of the search for an AD will impact the future of Brady Hoke.

The maligned Penn State offensive line got a boost last week with the return of left guard Miles Dieffenbach from a knee injury. He should see more reps this Saturday. And that?s? good. Now, it looks like things could get even better for the front with left tackle Donovan Smith apparently primed to return from concussion/head issues after missing two games.

Smith and Dieffenbach have started next to each other in each of the previous two seasons, and that experience could be an asset for an offense that ranks last in the Big Ten in both rushing offense (86.6 ypg) and sacks allowed (35).

One nice wrinkle Ohio State?s offense has is using Jalin Marshall in a Wildcat formation. He typically always runs when in the formation. But, could more passes be coming?

Marshall has played receiver and H-Back for the Buckeyes this season, and he's probably going to be more heavily involved in the offense now that Dontre Wilson is out with a broken foot. Why not? It?s all about getting your best players the ball as often as possible.

"We have a couple of passes ready for him," said Urban Meyer.

Iowa trudges to Illinois coming off a brutal 51-14 loss at Minnesota. And the Hawkeyes will find an Illini team that has a lot to prove.

?We?ve won four football games, which we haven?t done in two years, already, speaks that we are moving forward,? Illinois coach Tim Beckman said last week on the Big Ten coaches teleconference. ?It?s not as fast as we?d all like it to be, but our program is moving forward. These next three games … One of your main goals is to achieve a six-win season. That?s something these players would like to do.?

Illinois quarterback Wes Lunt is expected to play this week. He suffered a leg fracture against Purdue on Oct. 4 and then missed the last three games. I like the Illini?s chances to beat Iowa.

Looking for someone to blame for Iowa?s floundering offense? It shouldn?t be tough, as there is plenty of blame to go around.

Iowa, 6-3 heading into Saturday's game at Illinois, began this season with eight returning starters after averaging 26.3 points and 377 yards per game in 2013. Through nine games this season, the Hawkeyes are averaging 27.9 points and 378.8 yards.

It was interesting to hear that Michigan State coach Tom Izzo spoke to the St. Cloud State team after the Spartans laid it on St. Cloud State in an exhibition game, 101-46, last week. Izzo ripped the Husky players for their ?lack of leadership and their individualistic tendencies.? Wow.

Izzo?s critique was arranged by Matt Reimer, the Huskies' longtime assistant and first-year head coach, after Izzo spoke to the media Friday night. Well, I guess this is one way to motivate: Get verbally crushed by a coaching icon.

Kevin Trahan of InsideNU.com takes a look at the Northwestern hoops team and wonders: What will be the best lineup?

I?m not gonna argue, as I wonder and wait to see if this program finally can get that elusive first-ever NCAA tourney bid. I think Chris Collins has a good shot at it. Book it: NU in the Big Dance before the Cubs are in the World Series.

Who doesn?t like nostalgia? Here?s a ?where are they now?? of the 1989 Indiana hoops team.