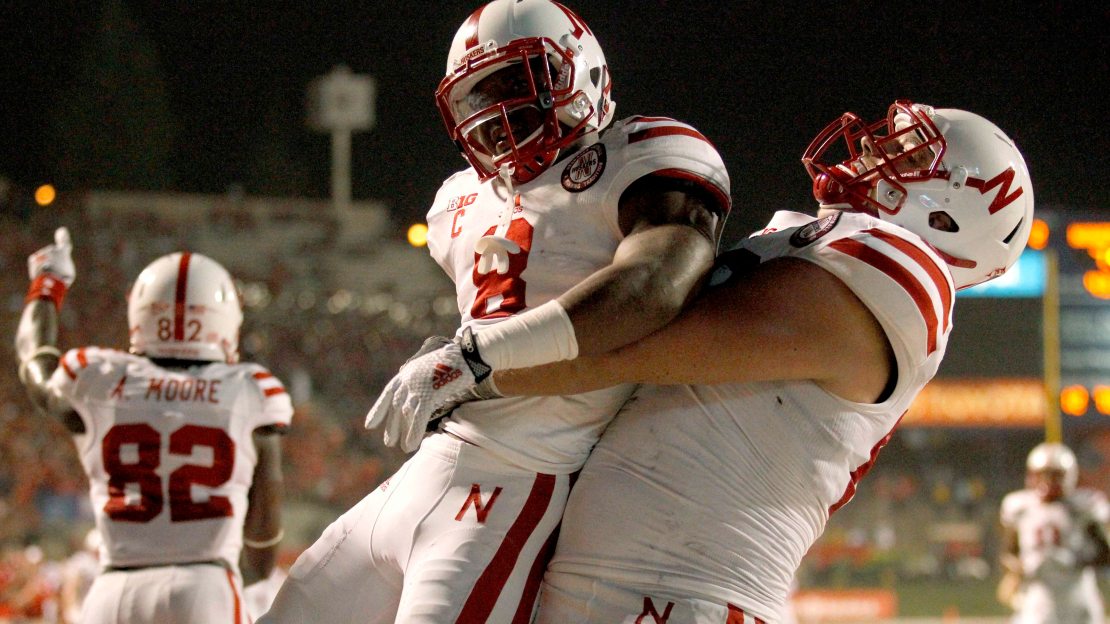 Nebraska is in the thick of the title chase in the Big Ten West. And a big reason for that is an offense that ranks among the best in the conference.

Guard Jake Cotton is part of a line that helps pave the way for a Cornhusker offense that ranks No. 3 in the Big Ten in scoring (40.4 ypg) and No. 3 overall (490.6 ypg). And the chief weapon all season has been running back Ameer Abdullah, who is No. 3 in the Big Ten in rushing (138.9 ypg) but had just one yard rushing the last time out after tweaking a knee vs. Purdue.

Abdullah and Cotton are both ready for a big trip to Wisconsin this Saturday for a West Division showdown that will go a long way in determining who earns a spot in Indianapolis for the Big Ten title game.

I caught up with the 6-6, 305-pound Cotton-whose father Barney is a former Husker and current assistant at Nebraska and whose brother Ben was a tight end for the Cornhuskers–as the senior from Lincoln, Nebraska, prepped for the Badgers.

Q: Trivia for you: When was the last time Nebraska won a conference title?
A: 1999.

Q: Impressive knowledge. What would it mean to end that drought?
A: Everyone who has played here since 1999 has wanted to attain a conference title for this school and Coach Pelini. But right now, it?s just Wisconsin. We have to play for the right to get to Indy. Our focus for now is on Wisconsin.

Q: Who is the hardest d-lineman on your team to block?
A: Probably Big V, Vincent Valentine. He?s a guy I went against in the spring and then in fall camp. The dude is hard to move. I affectionately call him ?god?s bowling ball? because of how hard of a worker he is, how strong he is and how hard he works. Trying to run inside zone on him 20 times a day isn?t fun. Maliek Collins is a boar, too. Mike Moudy has had great battles with him. Randy Gregory, too.

Q: Who has been the toughest opponent you have had to block?
A: Not sure. We play against so many good ones. The hardest guy I have had to block in my career probably is Big V and a guy when I first got here and was young in Jared Crick. He played with his hands well and was able to get off blocks quickly.

Q: Who is the toughest offensive lineman on your team?
A: Alex (Lewis), Mike, Mark (Pelini) ? just about everyone we have.

Q: Who is the strongest?
A: I think it?s probably Ryne Reeves, No 65. The dude has vice grips for hands and can throw around a lot of weight in the weight room.

Q: Which one would you not want to be a roommate with?
A: I lived with Mike Moudy my freshman year in the dorms. And we kinda butted heads because he liked to keep the room at about 75 degrees. And it was messy. Alex Lewis, too, because he lives in a barn. Who wants to live in a barn?

Q: Literally? A barn?
A: His grandparents have a barn in the southwest part of Lincoln. They have a ranch, about 40 horses, too. And he lives in a little area of the barn that has been converted into an apartment.

Q: Probably a good place for parties, right?
A: Yes, a great place to hang out. But I don?t know if I could live with the horse flies.

Q: What?s it like blocking for Ameer Abdullah?
A: It?s a blast. Sometimes we don?t even block the play the right way. And the next thing we know, we see him 20 yards down field running for a touchdown. You couldn?t block for a more humble guy. He really gets what it is to play football and to play football at this university. When things aren?t going well up front, he?s not a guy who is gonna rag on us or yell at us. He tries to encourage us and build us up. Blocking for a team guy like that, couldn?t ask for anything better.

Q: If Nebraska still ran the ?Fumblerooski,? which o-lineman would run the ball?
A: Me. No question. I wouldn?t let them put in the play unless I got the ball. I think every lineman would say the same thing, of course. But if someone is getting the ball, it?s gonna be me. I know Givens Price would say that. Alex Lewis definitely would say that.

Q: What is the maddest you?ve seen Bo Pelini?
A: The most frustrated I saw him, it was April of 2010. I was a senior in high school and I was on campus for some reason on April Fool?s Day. I walked into his office and told him that I just couldn?t do it (come to Nebraska). The pressure of my dad and brother being here. He asked me why and wondered what other schools had that Nebraska didn?t. And I told him the coaches weren?t as gullible there. And he kinda looked at me weird, and I said ?April Fools.? He took it in stride but said he was gonna find payback. But I haven?t seen it yet.

Q: What?s the best training table meal?
A: Has to be our game day meal-crab legs, prime rib, anything you want. Spaghetti, shrimp, all the veggies ?

Q: Do you linemen have nicknames for each other?
A: Mike Moudy is known as ?Positive Mike.? He is kinda the director of morale on the line. When things get hard and kinda tough, you look at him and he has full grin. I am called ?Butch? and have been for years.

Q: Runza or McDonald?s?
A: Runza, without question. It?s made fresh. But if you haven?t had a home-made runza, you are missing out.