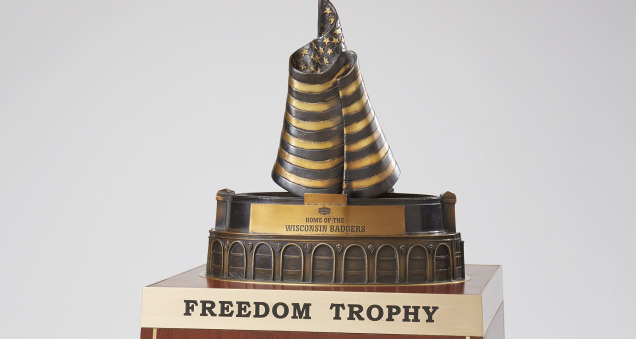 Nebraska and Wisconsin are in the same division now and will play every season, so it only makes sense for the two schools to play for a trophy.

Well, the two programs unveiled the Freedom Trophy on Monday, five days before they meet for the first time since the 2012 Big Ten title game that the Badgers won 70-31.

Here's what the ADs said about the trophy:

?Trophy games are part of the tradition of college football, and I?m thrilled that we?re going to be introducing one into our rivalry with Nebraska,? Wisconsin Director of Athletics Barry Alvarez said. ?The Freedom Trophy brings recognition to two historic football venues and it honors our nation?s veterans. It is something I know the coaches, student-athletes and fans of both programs will embrace for years to come.?

?We are honored to partner with Wisconsin in an annual Freedom Trophy game, as both of our football programs and stadiums have rich histories and traditions,? Nebraska Director of Athletics Shawn Eichorst said. ?The Freedom Trophy provides a unique opportunity for us to pay special tribute to the brave men and women who have and will continue to defend our nation's freedom."