What did Tom Dienhart learn about Big Ten in Week 11? Here's what! 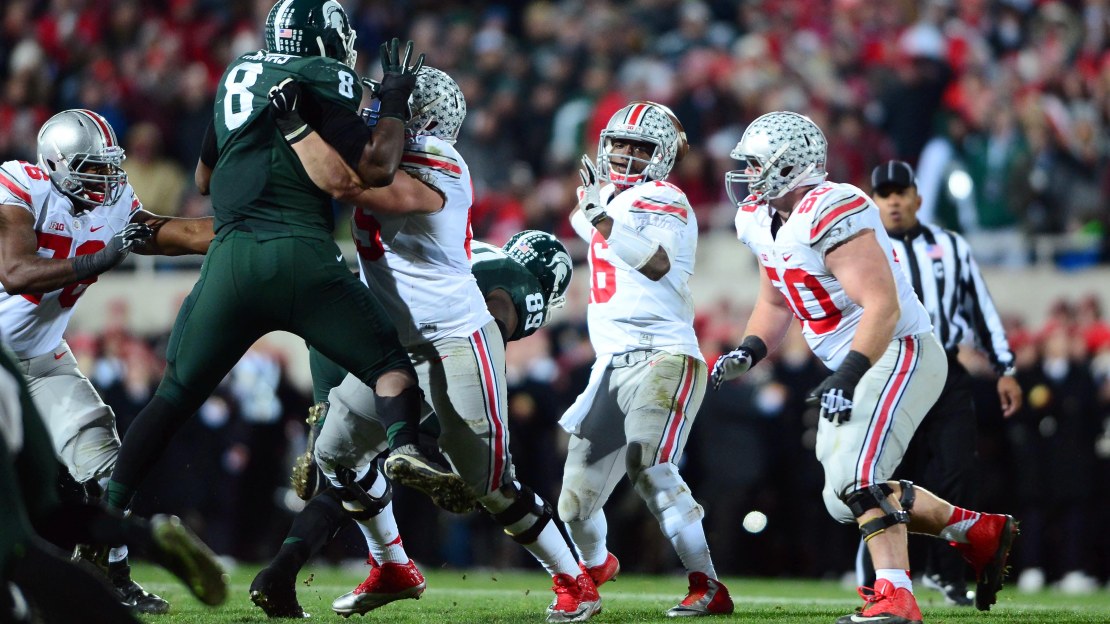 Ohio State may be the hottest team in the nation, but can it reach the playoff promised land? And J.T. Barrett just may be the best player in the Big Ten.

Here is what I learned in Week 11.

1. Ohio State is the Big Ten?s best team. Heck, it may even be the nation?s hottest team, ripping off seven wins in a row in often dominating fashion. This team is all about its offense, as it?s averaging 51.3 points during its seven-game winning streak. But Ohio State may be hard-pressed to make up enough ground to earn a playoff spot, as that early-September home loss to Virginia Tech continues to haunt the Buckeyes. Stay tuned. This is going to be interesting.

2. Ohio State redshirt freshman QB J.T. Barrett is the best player in the Big Ten. Sorry, Melvin Gordon. I apologize, Ameer Abdullah. But Barrett is playing at another level and showed it at Michigan State with an otherworldly effort that saw him hit 16-of-26 passes for 300 yards and three TDs, to go along with 86 yards rushing and two scores. All under the glare of a national spotlight vs. a marquee foe that is known for defense. Wow. More wow: Barrett's 172.9 QB rating is No. 2 in the nation, behind only Oregon's Marcus Mariota.

3. Michael Geiger needs to get things figured out. A year ago, Geiger was the Big Ten's top kicker, making 15-of-16 field goals. This year, the Michigan State kicker is just 8-of-14 and has missed one field goal in each of the past five games, including a big 39-yarder following an Ohio State turnover in Saturday night's 49-37 loss.

4. Minnesota isn?t going away. The Gophers? coaching staff showed again why it?s one of the best in the business, using a bye week to regroup after a bad loss at Illinois to turn around and crush Iowa. This staff gets more out its talent than any in the Big Ten. Minnesota is tied for first in the Big Ten West with opportunity at its feet with games left vs. Ohio State; at Nebraska; at Wisconsin.

5. Wisconsin is rolling and may be the best team in the West. The Badgers? win at Purdue makes it four in a row for Wisconsin, which is spearheaded by terrific defense. When will coordinator Dave Aranda start to get some props? He rebuilt the front seven and it is even better than last year. The Badgers have yielded a total of 23 points in the last three games while allowing 544 total yards (181.3 ypg) and 148 rushing yards (49.3 ypg). Vince Biegel was the star this week, as he registered seven tackles and an eye-popping three sacks.

6. Iowa is just an average team. I?m finally ready and able to embrace that notion after the 51-14 shellacking the Hawkeyes absorbed at Minnesota. This team just can?t rush the ball, which puts too much pressure on the passing game. And the defensive line is overrated. Last week?s 48-7 win vs. Northwestern was an aberration. This team struggled to beat the likes of Northern Iowa, Ball State, Pitt and Purdue earlier this year. And it lost to a bad Iowa State team that just got whipped by a horrible Kansas team. Iowa may end up 6-6 or 7-5. Embrace your ?averageness,? Hawkeyes.

7. Where would Penn State be without its defense? A scary thought, huh? The offense continues to stumble behind a makeshift line, but PSU squeezed out just enough offense in a 13-7 win at Indiana to end a four-game slide. Now, the 5-4 Nittany Lions are poised to make a bowl with games left vs. Temple; at Illinois; vs. Michigan State. But, it may be close. Christian Hackenberg showed more poise in the face of adversity this week than he did last week. He has thrown for over 200 yards just once in the last four games and has seven touchdown passes and 12 interceptions on the season. Here?s hoping that Hackenberg is learning from these tough times.

8. Purdue continues to get better. Yes, the Boilermakers have lost four in a row and officially were eliminated from bowl contention with the loss to Wisconsin. Still, this program has come miles in a season under Darrell Hazell, who continues to deal with a talent-short roster. Coordinators John Shoop (offense) and Greg Hudson (defense) can only do so much with schemes. It will be fun to see where this program is in another year or two. Be patient.

9. Despite the tumult at Michigan, the Wolverines aren?t going to recede into the night. The Wolverines? 10-9 win at Northwestern wasn?t pretty. Nonetheless, Michigan has won two games in a row and three of four. (The lone loss was at Michigan State.) And at 5-5 with two games left (Maryland; at Ohio State), the Wolverines have a shot to go bowling after being 2-4 following the loss at Rutgers that pushed Michigan?s losing skid to three. Kudos to Brady Hoke and Co.

10. Put a fork in Indiana and Northwetern's bowl hopes. They aren't mathematically eliminated yet, but they both need to win their final three games. If you're wondering, Indiana hasn't made a bowl since 2007 and Northwestern is on the verge of missing the postseason for the second consecutive season, on the heels of five straight bowls.