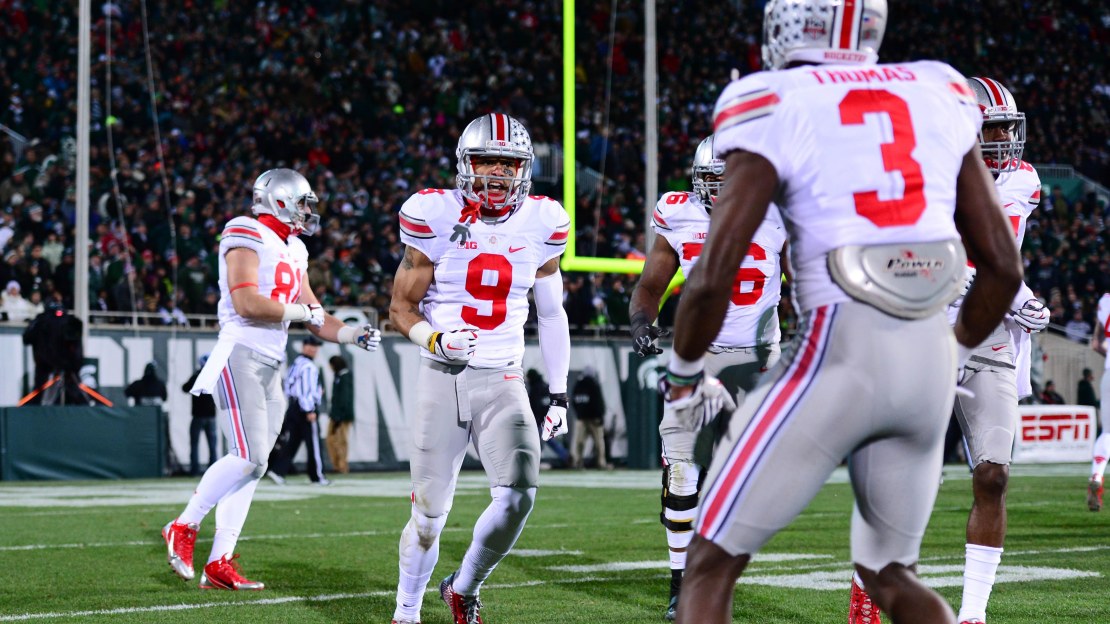 Saturday closed with Ohio State flexing its muscles by showing that it's the premier team in the Big Ten. But don't sleep on Wisconsin, which also continues to roll.

Biggest surprise: It was surprising to see Minnesota blast Iowa, 51-14. But it was more shocking to see Ohio State dispatch Michigan State with relative ease, 49-37. The win allowed the Buckeyes to seize control of the Big Ten East and perhaps get in position for a playoff spot.

Biggest disappointment: Iowa. All of the momentum the Hawkeyes had coming off a 48-7 win vs. Northwestern last week went up in thin air with a 51-14 loss at Minnesota. The Hawkeyes scored first and last. In between, the Gophers scored 51.

Play this again: The Ohio State at Michigan State game was filled with some drama for almost three quarters in what was billed as the Big Ten's "game of the year." Each team provided a lot of offensive fireworks to combine for 1,104 yards and 86 points.

Never play this again: It's a tie this week, as neither Penn State's 13-7 win at Indiana nor Michigan's 10-9 victory at Northwestern were, um, a thing of beauty. In the first game, the teams combined for as many points (20) as punts (20). Really. And in the second game, there were turnovers and miscues all over the place.

Best play: Maxx Williams' sideline catch. I can describe it here, but I'll just let the video below do the talking.

What an effort by @GopherFootball TE Maxx Williams on this catch. Brought to you by @Buick. http://t.co/HmIefQbazj

Best moment: It has to be Jerry Kill dancing in the victorious Minnesota locker room. With his players circled around him, Kill showed off some fantastic moves. Tom Hruby, the 33-year-old active Navy SEAL, leading Northwestern onto the field was pretty great, too. Watch it here.

How great is this footage of Jerry Kill dancing in victorious @GopherFootball locker room? Love it! http://t.co/jaeTtWMBJp

Ohio State. The Buckeyes notched their seventh win in a row since that heinous loss at home to Virginia Tech. Ohio State is in control in the East, headed for a showdown in the Big Ten title game with Nebraska-or maybe Wisconsin or Minnesota. Regardless, OSU is clearly the best team in the Big Ten thanks mostly to a dynamic offense that has averaged 51.3 points during the seven-game win streak. Can this team get in playoff position?

Minnesota. The Gophers had last week off following a stunning 28-24 loss at Illinois. The time off helped, as Minnesota trashed Iowa to reclaim Floyd of Rosedale for the first time in two years. Even better: The win keeps the Golden Gophers in a tie atop the Big Ten West with Ohio State coming to the Twin Cities next week.

Wisconsin. The Badgers rolled Purdue to remain tied atop the Big Ten West, setting up a big showdown vs. Nebraska next week. The Badgers have won four games in a row. Quarterback Joel Stave continues to come on, hitting 19-of-29 passes for 219 yards with two touchdowns and an interception vs. the Boilers.

Penn State. The Nittany Lions sipped from the victory cup for the first time since September 20, ending a four-game winning streak. Penn State needs one more win to gain bowl eligibility with games left vs. Temple, at Illinois and vs. Michigan State. As long as this defense keeps playing well, I like the Nittany Lions' chances.

Iowa. The Hawkeyes have gone from contender to pretender in the West with their emphatic loss at Minnesota in which they were held to a season-low 84 yards rushing with just 205 yards overall. Yes, Iowa technically is still in the West race with big home games left vs. Wisconsin and Nebraska. But things aren't looking good.

Purdue. Any faint bowl hopes the Boilermakers possessed are gone, as they became the first Big Ten team to officially be eliminated from bowl contention with a 34-16 home loss to Wisconsin. That's four defeats in a row for Purdue, which has lost nine in a row to the Badgers dating to a 1997 win.

Northwestern. The Wildcats 10-9 home loss to Michigan puts them on the brink of bowl elimination with six losses. And next up for NU is a trip to Notre Dame, which will be hot after losing at Arizona State. So, unless the Wildcats win out, they will miss a bowl for a second season in a row after making five consecutive postseason appearances.

J.T. Barrett QB Ohio State. He was sensational, hitting 16-of-26 passes for 300 yards and three touchdowns while also running 14 times for 86 yards and two touchdowns. Big Ten Player of the Year?

ICYMI: @OhioStAthletics Michael Thomas makes the catch and he runs for a 79-yard TD. Brought to you by @Buick. http://t.co/aug5i99j56

Mitch Leidner QB Minnesota. He had maybe his best game ever as a Gopher, hitting 10-of-13 passes for 138 yards with four touchdowns and rushing for a team-high 77 yards on 11 carries. Leidner helped Minnesota notch 429 yards overall with 291 coming on the ground.

Wisconsin RB Melvin Gordon. He made another case for his Heisman worthiness. It was the third time this season that Gordon has eclipsed the 200-yard rushing mark, running for 205 yards on 25 carries with a TD.

Michigan RB De'Veon Smith. He ran for a career-high 121 yards in the Wolverines' 10-9 win at Northwestern. That was key, as Michigan had only 256 total yards for the game. The win kept Michigan's bowl hopes alive, as the 5-5 Wolverines have games left vs. Maryland and at Ohio State.

154, rushing yards for Ohio State's Ezekiel Elliott to go with two touchdowns. It was Elliott's fourth 100-yard game in the last six contests.

3, touchdown catches for Minnesota TE Maxx Williams. He continues to make a case for being the best tight end in the Big Ten. Williams nabbed five passes for 46 yards to go along with the three touchdowns. And he had a toe-dragging 25-yard circus catch among his grabs to augment his resume.

20, combined punts in the Penn State at Indiana game. That's as many combined points that were scored. The teams also combined for a stupefying 740 yards punting.

137, yards rushing for Michigan State's Jeremy Langford to go along with three touchdowns. It was Langford's sixth 100-yard rushing game in a row and 13th in succession vs. a Big Ten team.

568, yards for Ohio State. Michigan State had been allowing 279.4 yards per game entering the contest.

-9, yards rushing for Northwestern vs. Michigan. That total was trimmed by five Wolverine sacks.

268, yards rushing for Ohio State vs. a Michigan State defense that had been allowing only 95.4 (2nd in the Big Ten).

21, yards rushing for Iowa's Mark Weisman on 14 carries vs. Minnesota. The last two years, Weisman torched the Gophers for 324 yards rushing on 45 totes. Weisman did score the 30th TD of his career, making him the third player in school annals to accomplish that feat.

26, yards rushing allowed by Wisconsin on 26 carries vs. Purdue.