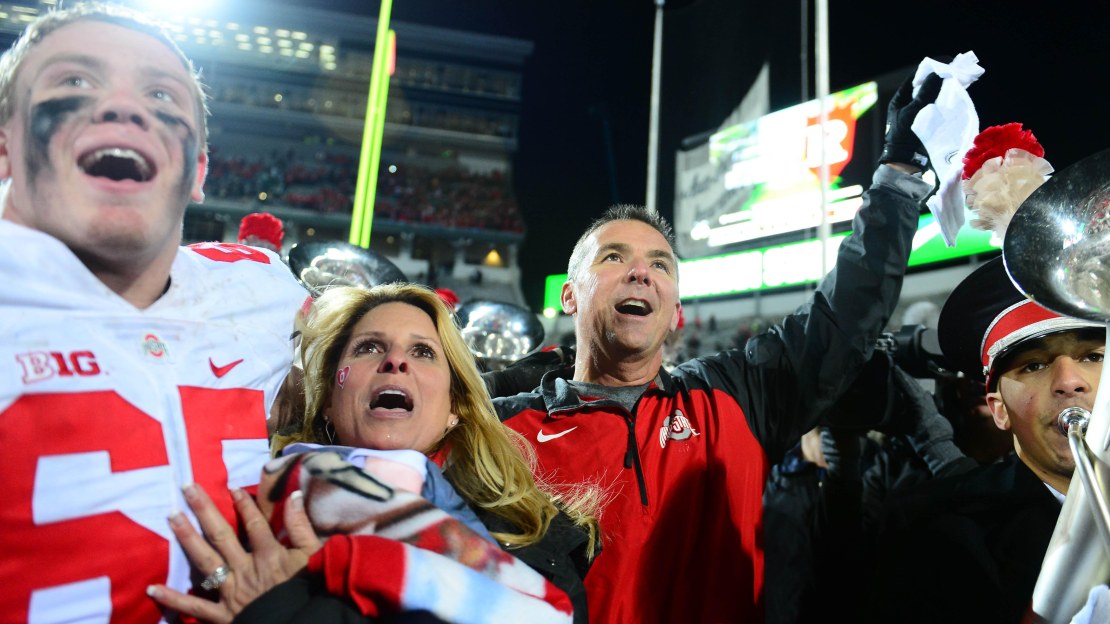 EAST LANSING, Mich. - Urban Meyer pumped his arms in the air. Who could blame him?

Less than 30 seconds hung on the clock that showed Ohio State dominating Michigan State by what soon would be the final score of 49-37. Meyer deserved the quick show of celebration. His team had sent a message, loud and clear: The Buckeyes are the best team in the Big Ten.

"Very proud of our guys, a young team grew up tonight," Meyer said. "I told them the future is extremely bright for Ohio State. There was a bunch of young players out there playing that acted like older players, really, really proud of them."

Now the debate will rage: Can Ohio State make up enough ground in the College Football Playoff poll to earn a spot in the four-team playoff? The Buckeyes were No. 14 last week. No doubt, Ohio State-which is 21-0 in regular-season Big Ten games under Urban Meyer–will make a move up this week with the likes of Kansas State and Notre Dame losing. But OSU may have too much ground to make up.

The Buckeyes? resume glows-but not brightly. Prior to tonight, their best win was at Maryland. And that one defeat–a home loss to Virginia Tech–is uglier than anything on any other one-loss resume among the top contenders. The Hokies sit in the basement of the ACC Coastal Division with a 4-5 overall record and a 1-4 ACC mark.

The only other boost OSU will get will come in the Big Ten championship game with, best case, a possible showdown with one-loss Nebraska.

We?re getting way ahead of ourselves ? but know this: It?s going to be difficult to overcome that Virginia Tech loss should Ohio State run the table-it has games left at Minnesota before finishing at home vs. Indiana and Michigan–to win the Big Ten with a 12-1 mark.

Florida State looks like a lock for one playoff spot. And you know the SEC champ will get a playoff slot. That leaves two spots for the likes of the Pac-12 and the Big 12 champs, whose one-loss resumes are in better shape at this point than Ohio State?s. And don?t discount the possibility of a second SEC team getting in.

This much is for sure: Michigan State?s playoff dreams have died.

But let?s focus on the here and now. This Ohio State squad is playing well. Maybe as well as any team in the nation since that 35-21 loss to Virginia Tech way back on Sept. 6. Since then, the Buckeyes have won seven games in a row, scoring an average of 51.3 points. The only close call was a double-overtime 31-24 win at Penn State-and that looks as vexing as the loss to Virginia Tech.

anybody disagree with the following….Ohio State is the most improved team in America since Va Tech loss #OSUvsMSU

This win tonight in East Lansing, which avenged last year?s loss to MSU in the Big Ten title game, was without a doubt the Buckeyes? best victory of the season. Michigan State was No. 8 in the CFP poll and had all the motivation in the world to win with a golden chance to move up the playoff pecking order. But Ohio State was too dominant on offense all night-and dashed the Spartans? playoff hopes.

The star of Ohio State quarterback J.T. Barrett continues to rise. The redshirt freshman sensation hit 16-of-26 passes for 300 yards and two touchdowns and ran for 86 yards and two scores. It was a true coming-of-age performance vs. a MSU defense that entered the game allowing just 279.4 yards and 20.2 points but that yielded 568 yards and 49 points.

Is Braxton Miller really gonna be the starter in 2015 over Barrett? That?s a debate for another day. All that matters at this very moment is the fact Barrett is playing better than any quarterback in the Big Ten-and has for most of this season. And he just may be the league?s player of the year over the likes of Wisconsin?s Melvin Gordon and Nebraska?s Ameer Abdullah.

Ohio State took control of this game late in the second quarter and had a 28-21 halftime edge. The key moment?

On 4th-and-5 at the Ohio State 35-yard with the third quarter winding down and trailing 35-24, MSU opted to go for it-Nick Hill was stuffed for a one-yard loss. The Buckeyes took over and subsequently drove for a touchdown with Barrett throwing seven yards to Dontre Wilson to give Ohio State a 42-24 lead with 12:07 left.

MSU running back Jeremy Langford did his part, running for 137 yards to go over the 100-yard mark a sixth game in a row. And Connor Cook hit 25-of-45 passes for 358 yards and two touchdowns. Heck, the Spartans even won the turnover battle, 2-0. It all didn?t matter on a night when the Michigan State defense had no answer for the Ohio State offense.

But Ohio State is bouncing forward. Maybe all the way to a playoff spot.