Michigan State vs. Ohio State: Who will have the biggest impact? 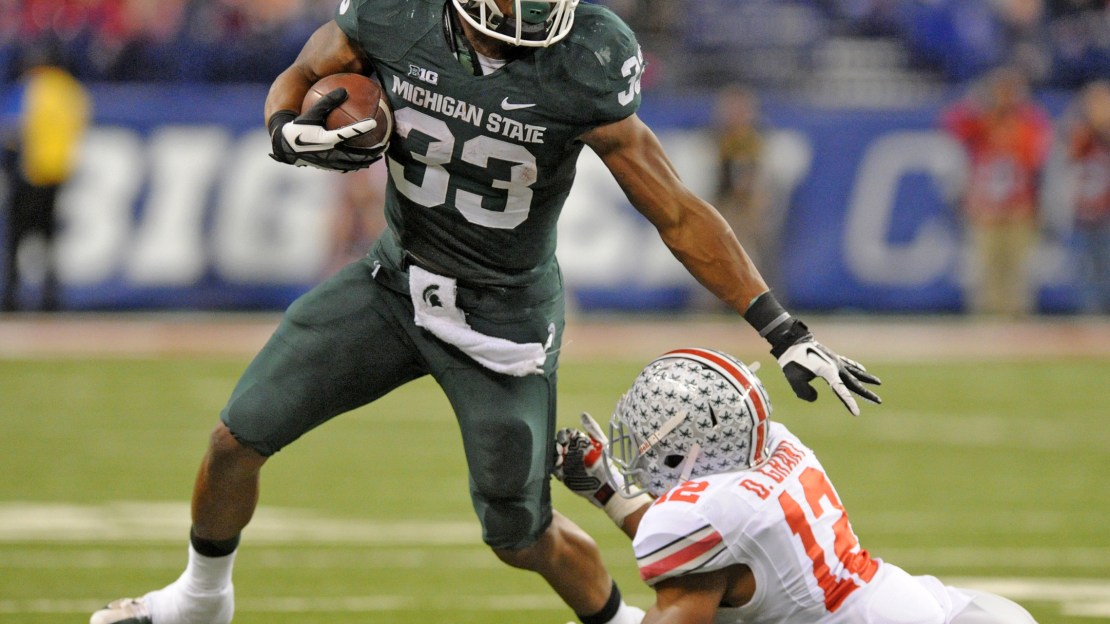 We are officially less than 24 hours away from the biggest game of the Big Ten football season. Michigan State vs. Ohio State. The much-anticipated matchup between these two Big Ten powerhouse programs will kick off at 8 p.m. ET Saturday night.

There are plenty of intriguing matchups in this game, but who are the players to watch in this Big Ten clash? I asked several Michigan State, Ohio State and national writers to tell me who they believe will have the biggest impact in this game.

"Michigan State must be more physical upfront allowing Jeremy Langford to hit the holes with speed. Jeremy Langford has become one of the nation?s toughest running backs to bring down. His power and vision through the hole make him dangerous for any defense." – Eric Crouch, Big Ten Network

"Can the Spartans' offensive line stop Joey Bosa on the other side? A slimmed-down and quicker Jack Conklin and Co. handled speed rusher Randy Gregory, but Bosa presents more of a pure power passer pursuer." – Chris Solari, Lansing State Journal

"The ball is in his hands, literally. Cook will make plays with his arm. The key is that he also avoids turnovers." – Graham Couch, Lansing State Journal

"Ohio State's pass defense is much better now than it was when the two teams met last December in Indianapolis. But it still won't be easy for the Buckeyes to cover Tony Lippett, the Big Ten's best receiver who is on a serious roll. Look for him to catch two touchdown passes from Connor Cook." – Brian Bennett, ESPN.com

Ohio State has one of the best defensive lines in the country, and I'm assuming Ohio State will line up Joey Bosa away from Jack Conklin as much as possible. That's going to put the pressure on the right side of the line. MSU is allowing less than one sack per game, while Ohio State's defense is getting three per game. If MSU's offensive line holds, that opens everything up with the potent skill position players." – Chris Vannini, TheOnlyColors.com

"This is simple: Barrett has not played his best in Ohio State's biggest games. That has to change in a hostile road environment — and against the toughest team the Buckeyes will face all season." – Nicole Auerbach, USA TODAY Sports

"The redshirt freshman has taken on a larger role at H-back the last few weeks, and after trying to throw deep too often in the Virginia Tech loss, the Buckeyes must use speedy skill guys like this to attack the MSU defense somehow. Marshall has also taken over the punt return duties, where he's a threat to break one but has also taken some risks that could backfire Saturday if he's not careful." – Doug Lesmerises, Cleveland.com

"Ohio State ran the ball well against MSU in last year?s B1G title game. They only threw for 101 yards. Other than Philly Brown, they completed one other pass to a WR and that was to Devin Smith. The OSU receivers could not get open against Dennard and Waynes. Waynes is back. Thomas has emerged as their leading receiver. He needs to play big and help Barrett out if they are to have any chance to win. He redshirted last year. Smith and Dontre Wilson also need to factor in there, too." – Steve Helwagen, 247Sports.com

"He has been a steady force in the Ohio State backfield, running for over 100 yards in three of the last four games. Elliott will need a strong game to take pressure of QB J.T. Barrett and to keep the vaunted Spartan defense off balance." – Tom Dienhart, BTN.com

"Forget that Jones called J.T. Barrett a "way better quarterback" than Braxton Miller and then got some return fire from Miller on Twitter. Even without that sideshow, he'd be huge in this game for his pre-snap recognition and run-stopping abilities. MSU has to force Ohio State to be one-dimensional. Jones' breakthrough as a player came in MSU's stifling of Ameer Abdullah on Oct. 4." – Joe Rexrode, Detroit Free Press

"One of my favorite players heading into the season, I liked his Intelligence, instincts, ability to cover over the top in zone, more than hold his own in Man, and tackle well in the run game. He had a tough game at Oregon where he lost ?eye discipline,? and got caught peeking into the backfield as receivers ran by him for big plays and touchdowns. Expect Ohio State to test him, and see if the 2013 version of ?KD? is back?If so, Michigan State will be in great shape on defense." – Charles Davis, FOX

"Opponents have looked to attack Michigan State's safeties this season with some early season struggles. While Williamson and Kurtis Drummond are coming off a great game against Michigan, this will be a challenge. On top of being tested downfield, Williamson will need to be strong in run support like Isaiah Lewis was against OSU last year." – Mike Wilson, Scout.com

"The sophomore has been a monster this year, particularly lately with 6 1/2 sacks in last three games. MSU has given up only five sacks all season, so that'll be a fascinating matchup to watch." – Bill Rabinowitz, Columbus Dispatch

"You know what you're getting from star end Joey Bosa, but the Buckeyes need a second difference-maker up front to pressure Connor Cook - and slow running back Jeremy Langford. Bennett, one of the league's top interior lineman, can be that guy" – Dave Briggs, Toledo Blade

"It would be easy to go with Joey Bosa because he has been dominant. If he can get his usual 2 sacks and 3 TFLs that would be huge. I?m going with Lee because between sacks, fumbles and interceptions he always seems to make one or more game changing plays per game. He is a redshirt freshman who is playing well beyond his time in the program. Key will be he and the rest of the linebackers to bottle up Jeremy Langford, too." – Steve Helwagen, 247Sports.com

"Maybe the biggest play of last year's Big Ten Championship was a blown coverage by an OSU safety that led to a Spartan touchdown, as Bell sat on the bench. The secondary scheme is more aggressive this year, but the personnel is also more solid – though Bell, a first-year starter as a sophomore, has been beaten a couple times while in good position to make a play on the ball." – Doug Lesmerises, Cleveland.com