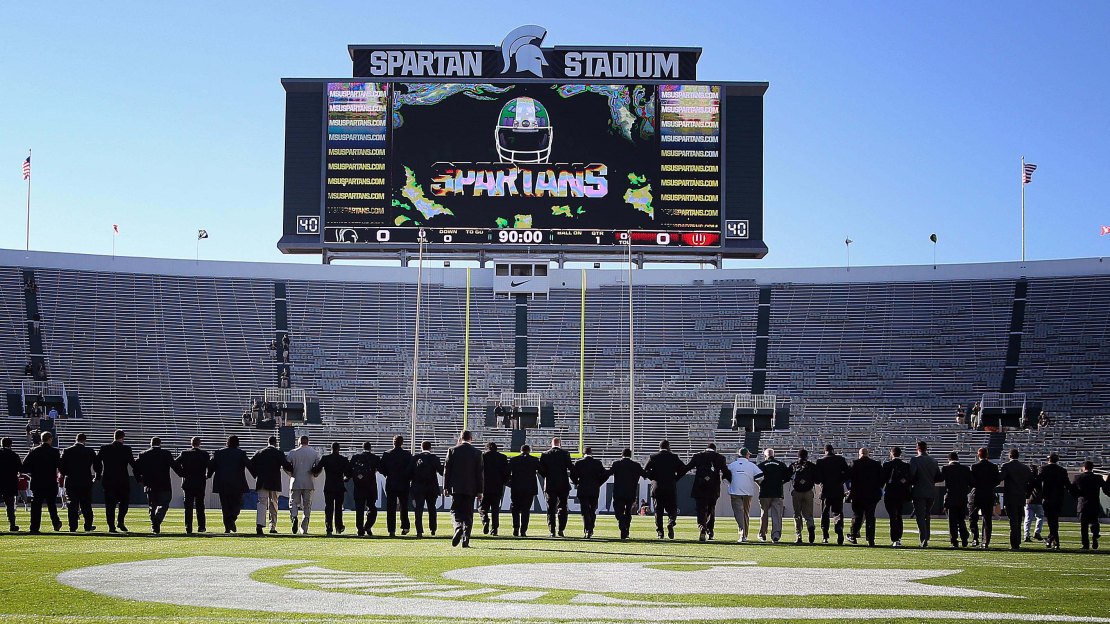 The great Mike Griffith of Mlive.com continues to prime the pump for the Ohio State at Michigan State game with five reasons why each will win on Saturday night. My reason No. 1 for MSU: Jeremy Langford is rolling. My reason No. 1 for OSU: The monster d-line. Let?s play this game.

It?s all right there-namely a West title–for Minnesota to seize in the next four games: Iowa, Ohio State, Nebraska, Wisconsin. But it?s gonna be tough. Joe Christensen of the Minneapolis Star-Tribune looks at each of the four big games.

Which one is the toughest? Has to be the Buckeyes? visit.

With a Spartan win, MSU?s Connor Cook would become the first quarterback to beat Ohio State twice since ? Illinois? Kurt Kittner. You will win a few bets with that factoid. Thank Doug Lesmerises for this info.

Interesting discussion on Pennlive.com on the development of Penn State QB Christian Hackenberg. Should fans be worried?

With each passing week, Hackenberg's angst with the coaching staff appears to grow.  Against Maryland, he openly clashed with offensive coordinator John Donovan multiple times, and has been visibly frustrated with his unit's lack of production this year. Hey, it?s part of growing up emotionally and physically. Hackenberg will be benefit from these struggles.

Many felt ex-Michigan A.D. Dave Brandon was too hands-on with Brady Hoke. What does Hoke think? ?That?s not for me to judge.?

Talking on a radio show, Hoke said: "I don't know," he said. "That's not for me to judge. I'm being honest with you. We all do things, you know, and we have a way of doing things. Obviously everything gets over-analyzed and criticized.

"But I'm being honest with you, that's not for me to judge. Heck, I've got my own world that we kind of live in."

Who else can judge that but Hoke? Regardless, in the end, it doesn?t really matter.

Dan Duggan of NJ.com takes a look at Big Ten coaching salaries. Which school is getting the most bang for its buck?

There is a provision to allow 5-7 teams to accept bowl bids. If Northwestern finds itself at 5-7 and in a position to do so, should it accept a bid?

Kevin Trahan of InsideNU.com says going to, say, the R+L Carriers Bowl to play Louisiana-Lafayette at 5-7 would be embarrassing. But as Pat Fitzgerald might say, that's where you really have to "embrace the suck" - and embrace your brains. If it happens, it could be instrumental in getting things turned around next season.

Rick Brown of HawkCentral.com has a look at how Iowa coach Fran McCaffery has changed since his son?s diagnosis with cancer. Nice read.

?There?s no one better as far as being selfless on this team,? said Bill Busch, the UW safeties coach. ?There?s no one I?ve ever coached that I appreciate more than him, ever.?

You win championships with selfless players like Jean. And that?s just what Wisconsin may do.