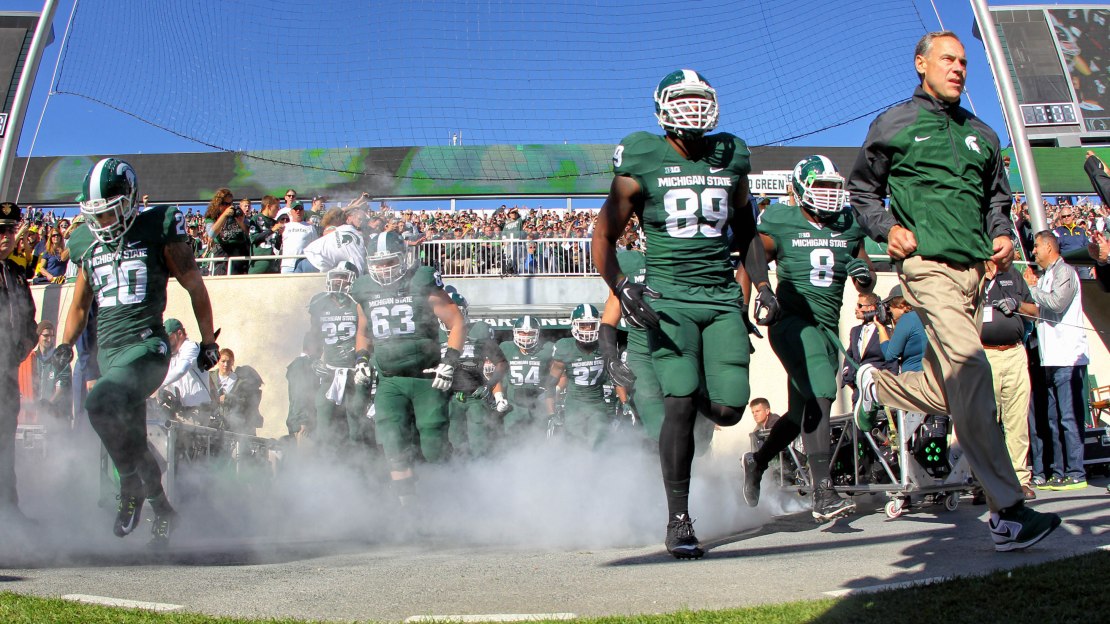 It?s time for 4th and Long, a hard-edged and opinionated look at the Big Ten and beyond.

There won?t be a better showdown in the Big Ten this season than the one between Ohio State defensive end Joey Bosa and Michigan State defensive end Shilique Calhoun. No, they won?t battle head-to-head, obviously, but each figures to have a big impact on the big showdown this Saturday night in East Lansing. MSU OT Jack Conklin (Bosa) and OSU OT Taylor Decker (Calhoun) will have their hands full.

Which Big Ten player has the best Heisman hopes as we head down the homestretch of the season? It?s Wisconsin?s Melvin Gordon. He?s No. 2 in the league in rushing (160.0 ypg) and leads the league with 18 rushing touchdowns. Imagine if he didn?t have Corey Clement in the backfield with him? Clement has 106 carries for 697 yards with seven touchdowns. I think Mississippi State?s Dak Prescott and Oregon?s Marcus Mariota are the leaders.

On that note, how many yards rushing do you think Indiana?s Tevin Coleman would have if he played at Wisconsin? He leads the Big Ten with 1,300 yards rushing (162.5 ypg) despite being a marked man and playing in an attack that struggles to pass.

Recent news that the NCAA questioned its own decision-making on the Penn State sanctions related to the Jerry Sandusky situation is interesting. I?m not sure what it will lead to, but it certainly paints a new picture on the thought process involving how the case was handled by the brass in Indianapolis. Penn State went so far as to release a statement on the issue, saying ?We find it deeply disturbing that NCAA officials in leadership positions would consider bluffing one of their member institutions, Penn State, to accept sanctions outside of their normal investigative and enforcement process.?

It will be interesting to see what direction Michigan goes in its search for an athletic director. Much has been made by some of the need for the school to hire a ?Michigan man.? I?m not so sure. Sometimes it?s good to go outside the family to get new perspectives and points of views.

Michigan State continues to walk the playoff tightrope. And this is a big weekend for the Spartans, who are No. 8 in the recent College Football Playoff poll. If MSU can beat Ohio State, it figures to move up at least one slot ahead of the loser of the No. 6 TCU-No. 7 Kansas State game. Then, the Spartans must win out while most likely climbing over teams ahead of it that still have tough games-No. 1 Mississippi State-No. 5 Alabama; No. 4 Oregon vs. No. 17 Utah; No. 2 Auburn-No. 5 Alabama; No. 2 Auburn vs. No. 20 Georgia; No. 1 Mississippi State vs. No. 11 Ole Miss; No. 5 Alabama vs. No. 16 LSU.

If Ohio State beats Michigan State, will that end the Big Ten?s playoff hopes? I think it just may do that. The Buckeyes are No. 14. I don?t think they can climb into the top four over this final month no matter if OSU wins out and there is significant attrition above it. The only other Big Ten teams ranked last week were No. 13 Nebraska and No. 25 Wisconsin. Like Ohio State, they would seem to have too much ground to make up. So, any Big Ten playoff hopes may be riding on the Spartans.

Speaking of the playoffs, I think No. 2 Florida State and No. 4 Oregon all but have two spots already sewn up. Each will be favored in their remaining games. FSU plays Virginia; at Miami (Fla.); Boston College; Florida; ACC title game (Duke?). Oregon has at Utah; Colorado; at Oregon State; Pac-12 title game (Arizona State?). Which of those two teams has the tougher path? I think it?s Oregon.

Things are not going well for Tom Crean at Indiana. Not only is he coming off a season in which the Hoosiers missed the NCAA tourney, but now he?s dealing with off-the-court issues that have many questioning his leadership. Crean needs to adopt a zero-tolerance policy for his players when it comes to trouble. This is no time to be ?easy and softer.? The public needs to see an iron fist. And it sure would help Crean if IU wins a lot of games. You know what they say about winning ?