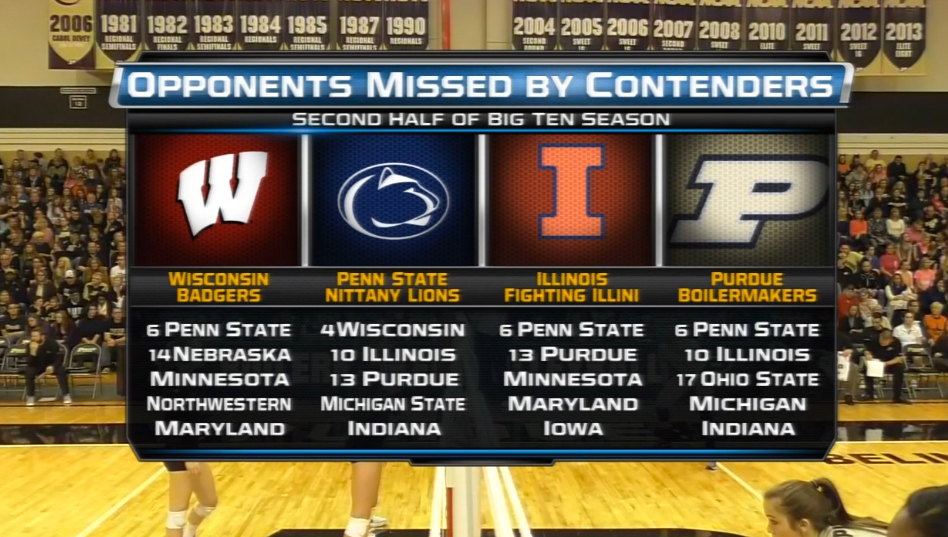 We?re one weekend into the second half of Big Ten play, and, unfortunately, there are few remaining matches that can shake up the standings. This is the reality of the new unbalanced schedule, which yields fewer meetings in the latter portion of the year when the title should be decided.

?The scheduling will have as much to say about who wins the conference as the teams participating,? Penn State head coach Russ Rose said earlier this season.

Before delving into the remaining matches that will play a significant role on the Big Ten title, let?s consider the job of scheduling 14 teams for 20 competitive conference matches apiece. It is an unenviable task, to put it mildly. I have not witnessed how it is accomplished, and I would not want to take on the job myself. No matter the final schedule that is released, someone will be unhappy. However, this year?s slate of league matches, especially those in the second half, have left many scratching their heads.

Since the addition of Nebraska in 2011, Big Ten volleyball had to do away with the play-every-opponent-twice schedule to determine a champion. Twelve teams meant 11 conference opponents instead of 10, and thus necessitated an unbalanced schedule. The Huskers would win the Big Ten in their first year – the only team other than Penn State to win it in the last 11 seasons – and while certainly deserving of the crown, there was a glaring omission in Nebraska?s league schedule.

2011 featured four teams in the conference race: Illinois, Nebraska, Penn State and Purdue. The Huskers faced Penn State and Purdue in home and away meetings but did not travel to play the Illini in Huff Hall. The 2011 Illinois team would go on to the NCAA title match, and while the outcome of a second meeting is simply a guessing game, a win for Illinois in Champaign that year over Nebraska could have resulted in a 4-way tie for the Big Ten crown. The lack of a second match between Illinois and Nebraska in 2011 deprived the league of a true champion and the three-second place teams had legitimate cause for frustration.

Flash forward to this year, the first with 14 teams, and similar frustrations figure to arise at the end of November. Four weeks remain before postseason play and the six ranked teams play each other just seven times out of 112 matches left. Narrowing it down simply to the contenders*, Wisconsin, Penn State, Illinois and Purdue, and only two** more matches are left that will have direct Big Ten title implications.

In the past week, our BTN Volleyball telecasts have featured a tremendous graphic that illustrates the absence of quality matches in the conference?s last four weeks. See it below. 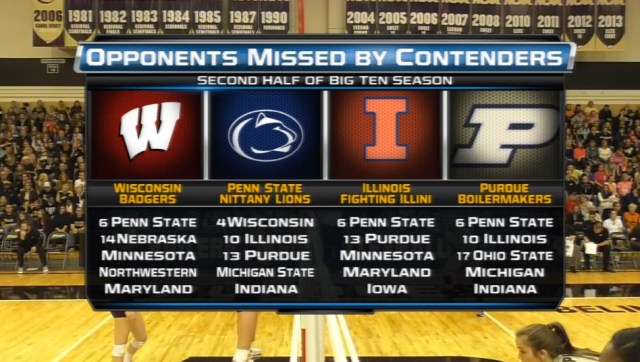 Wisconsin does not play Penn State or Nebraska for the remainder of the year, which is favorable for the current leader atop the standings. The Nittany Lions, the defending champion and one of two teams currently tied for second place, will not meet any of the other top four teams in the second half. Illinois, the other second-place squad, travels to Madison and faces Nebraska at home but will not play Penn State or Purdue again. The fourth-place Boilers are also deprived of second chances to beat the Lions and Illini with their remaining schedule missing those key matchups.

Initial reactions from fans at the beginning of the season may have been excitement for title hopes with lone meetings against other contenders. But, at this point in the year, it makes shifting the standings a considerably less likely scenario. Coaches are displeased rather than rejoicing about playing the best that the conference has to offer just once because it removes opportunities to move up the standings and means teams miss out on postseason preparation by facing the toughest competition as many times as possible.

Wisconsin head coach Kelly Sheffield spoke about playing an opponent just once prior to his team?s only meeting with Penn State in the Big Ten opener.

Considering only the matchups of the Big Ten contenders obviously does not give us the full picture. For years we have talked about the parity of the conference, as teams 1 through 12 could end up being your toughest match on any given night. That hasn't been the case this season, which is not simply because of the growing pains of newcomers Maryland and Rutgers.

With the exception of Michigan?s October 12 win against No. 8 Nebraska and Northwestern?s, at the time, shocking sweep of No. 17 Minnesota, the eight unranked teams in the Big Ten have posted a dismal 3-50 record against the AVCA Top 25.

Traditionally, the second half of the season is when growth is seen and unranked squads may pull off upsets that rearrange the standings. However, at the moment, few have given us any reason to believe that the Big Ten title will be decided by any match other than the two** that remain between the contenders.

So, what is the solution moving forward? The conference has made this schedule with the hope that it will balance out over a 14-year span for all member teams. Fair scheduling and equality in matchups is the whole point, but the conference might be better served by protecting several series or at least using common sense prior to the year to make sure top teams play more than once. Last season was a baffling year. After seeing four matches between Penn State and Nebraska that represented the best collegiate volleyball had to offer in 2011 and 2012, there was just one meeting between the two iconic programs on the schedule. And, it was a match that took place in the regular-season finale, when the Big Ten title had already been decided.

This year has another baffling scheduling hole: Penn State and Wisconsin meeting once. When the random schedule pops up on the computer, and you see that the two teams that played for the national title a year ago are not playing more than once, you need to make an adjustment.

Does that mean that over a 14-year period every team meets an equal number of times? No. But does it make for better volleyball each season? Yes, without a doubt. Big Ten fans are accustom to seeing the best volleyball in the nation, and we're all missing out when the best teams are not playing as much as possible.

A Big Ten tournament could be the answer. This way, a true champion could be crowned. The problem comes with sacrificing a portion of the regular season, and then there would be even less opportunities for all of the teams to face off.

?I liked it when it was pure, when you played 20 matches and saw every team and you earned it,? Illinois head coach Kevin Hambly said. ?Someone will have the most wins and the league is tough enough that you are going to earn it, but I don?t like it. Twenty-six matches in conference is not the answer, so what is? If we had the answer we would have brought it up.?

There's no simple solution, but it's apparent that the current setup is not ideal for the conference, the coaches, the players and the fans of the nation?s premier  league.

*Nebraska would need a lot of help to be a contender with four losses and no match remaining against Wisconsin.

**The only two matches left that feature two of the top four teams in the standings are Nov. 19 Illinois at Wisconsin and Nov. 28 Purdue at Wisconsin. Both matches being played in Madison is clearly an advantage to the Badgers title hopes.

Below are the seven remaining matches between ranked Big Ten teams: