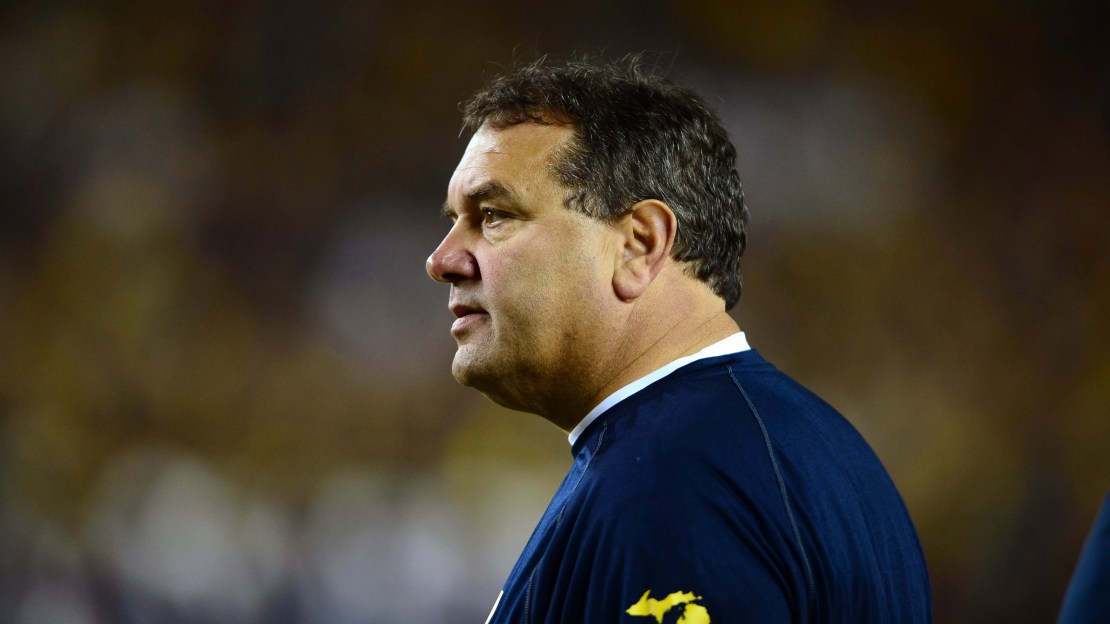 Michigan coach Brady Hoke addressed the resignation of A.D. Dave Brandon on Monday. Hoke said Brandon told him of his plan last Friday morning. It doesn?t sound like there are any hard feelings.

With the man who hired him gone, is Hoke worried about his future?

"And if I get distracted, I'm not being fair to those kids. Who haven't been distracted. I've never, ever, worried about employment."

When Ohio State comes to Michigan State this Saturday, someone?s long winning streak will come to an end.

Starting with a win at Minnesota in their 2012 Big Ten finale, the Spartans have won 13 consecutive regular-season conference games and 14 overall, counting last year's Big Ten championship game win over the Buckeyes. The Spartans' conference win streak is the second-longest in school history, behind only the 16 straight the team won from 1965-67.

Yes, Penn State has lost four games in a row. But don?t panic. I think the Nittany Lions are primed to get bowl eligible as they embark on a key three-game stretch.

Penn State's next three games are against two teams with a combined 1-8 Big Ten record (Indiana and Illinois) and another it has defeated 30 consecutive times (Temple). But the Lions' struggles are well known and chronic, so each game will be a chore. Particularly against Temple, which beat a ranked team (East Carolina) Saturday for the first time in 16 years. Penn State needs to win two before hosting Michigan State in the regular-season finale Nov. 29. Otherwise, that might be the season finale.

After Maryland beat Penn State, Terps coach Randy Edsall said he would like to see this burgeoning rivalry have a trophy at stake. Well, it looks like someone already came up with one.

It?s over, finally. And, it was as tough as expected. I?m talking about Rutgers? recent rugged ?Welcome to the Big Ten? stretch that saw the Scarlet Knights lose at Ohio State 56-17; at Nebraska 42-24; vs. Wisconsin 37-0.

"I think we're learning a little bit more each week," Rutgers coach Kyle Flood said. "I know the results don't show that, but ultimately I think the results will show that. I think as a staff and as players, we're gathering information every week about what we do and what we need to do."

RU is off this week, getting a chance to regroup for the final three games of the season. The Scarlet Knights need to win one of the three to gain bowl eligibility: Indiana; at Michigan State; at Maryland.

He was diagnosed in August with Stage 4 cancer, which began in his lungs and spread elsewhere. A droopy eye and headaches turned into unthinkable news.

"It's just jaw-dropping," Marble said. "You're done. It's like, 'Whoa!?' Your mind - 'I'm supposed to be doing this. What about, 'I'm planning on watching him play pro ball? I'm going to her wedding?'"

Are Nebraska?s offensive game plans too complex? Maybe. It also would help if QB Tommy Armstrong played better, but he is only part of the problem according to Steve Sipple of the Lincoln Journal-Star after a rather listless win vs. Purdue last week

"If we play a good team like Wisconsin or Iowa, and we turn the ball over as many times as we did, and make as many mistakes as we did, we're going to lose," Armstrong said after the Purdue win.

Sipple thinks Armstrong needs to relax. He?s a bit hard on himself. Pressing and too much self-criticism aren?t good.

A nice all-access look at the Minnesota football program by Joe Christensen of the Minneapolis Star Tribune. Great detail shows the precision with which Jerry Kill?s staff works.

Brian Rosenthal of the Lincoln Journal Star is doing team-by-team previews of each Big Ten hoops team. Good stuff. Check out this one on Indiana, a squad I?m not too sure what to expect from as it plays a four-guard lineup and deals with some off-field tumult.