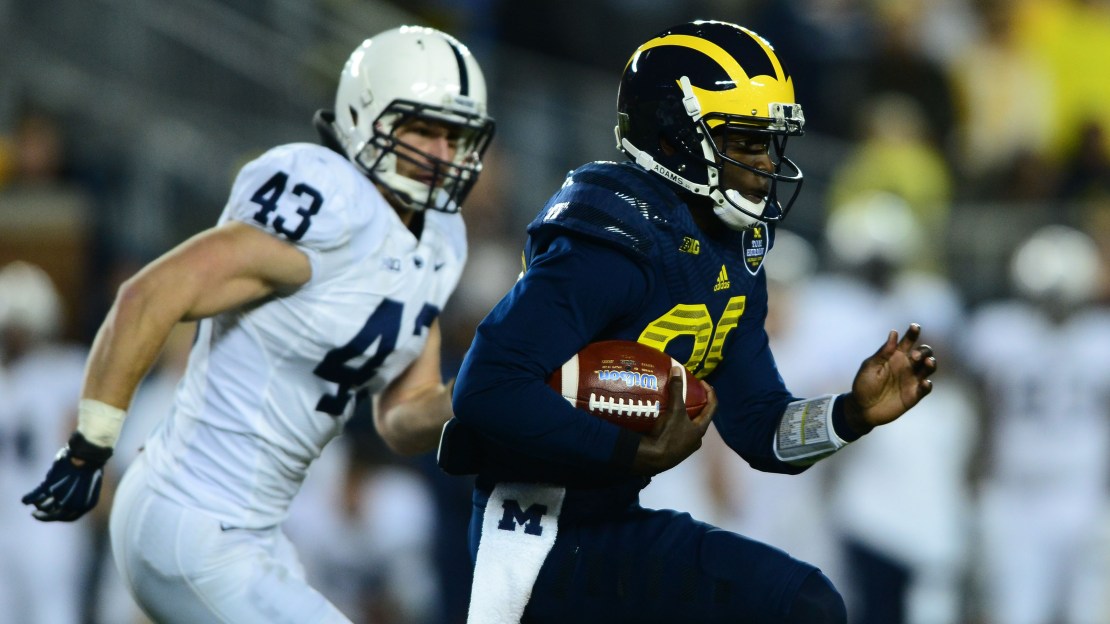 No big shock that a Big Ten school wasn?t among the top four teams. Michigan State ranked the highest at No. 8. But there is plenty of time to move up.

Michigan State coach Mark Dantonio has said he believes if the Spartans win the remainder of their games and finish with one loss, they'll make the College Football Playoff. I think he?s correct.

How in the wide, wide world of sports is Penn State linebacker Mike Hull not on the Butkus Award watch list?

Hull is averaging about 12 stops a game and is coming off a 19-tackle effort vs. Ohio State that also included 2.5 tackles for loss and an interception that set up PSU's second touchdown. It was one the singular best efforts of the season. Hull has 83 tackles in seven games, 46 in the last three. PSU's second-leading tackler (Nyeem Wartman) has 35 tackles.

Want more? Hull has seven tackles for loss, a forced fumble and he's been credited with five passes defensed. He may be the Big Ten defensive player of the year.

So, what?s left for Michigan to achieve this season for a team that?s coming unraveled and is sitting 3-5 overall and 1-3 in the Big Ten?

A win over Ohio State would be great. Otherwise, the postseason options look limited. How does a trip to, say, the Detroit Bowl sound? Or maybe the Dallas Bowl?

Pretty cool look back at how 2006 Heisman winner Troy Smith became a Buckeye.

The question hangs over Rutgers: Will QB Gary Nova play this Saturday when Wisconsin visits?

Head coach Kyle Flood said his team will decide if Nova will play later in the week. "Gary was out there today, throwing the ball around a little bit," Flood said. "He didn't take any reps with the team, Chris (Laviano) and Mike (Bimonte) took all the reps.

"We'll evaluate him again in the morning and see how much better he (Nova) gets," Flood said.

Difficult to envision RU winning vs. Wisconsin without Nova.

Nebraska has been notorious for losing a game (or two) that it probably shouldn?t. Theories abound as to why that has been the case under Bo Pelini. The staff hopes a new practice approach will make for fresher players able to finish strong during a monster make-or-break stretch run.

Implemented after offseason research and queries by Pelini, changes to practice regimens reduced the amount of wear-and-tear on the legs of Husker players and eliminated idle time in practices created by extra walkthroughs and instructional periods. Pelini estimated Monday that his team spent 30 fewer minutes each day at practice.

What a week for Iowa, which saw promising freshman wideout Derrick Willies transfer and LeShun Daniels lost because of injury.

This is a wideout corps that needs all of the help it can get. So losing Willies hurts.

Illinois had to be pleased with how Reilly O?Toole played in the big win vs. Minnesota. Even better news for the Illini: Wes Lunt is aiming to return from a broken leg for the Nov. 15 game vs. Iowa.

?We feel that there?s a great possibility for him to be back after the open week,? Tim Beckman said. ?Of course, if there?s no clearance to get him on the field, we?re not going to play him. That?s what we have doctors for, and they?re a lot more experienced in that than I am. Right now, our doctors feel he?s making great progress.?

Lunt has spent the last three weeks since the injury he sustained on Oct. 4 against Purdue wearing a purple, no-contact jersey during Illini practices. This team still could make a bowl, especially if Lunt comes back slinging.

The gang at InsideNu.com has it right: It?s make-or-break time for the Wildcats. It?s this simple: NU?s season hinges on the next two games. Without a win vs. Iowa or Michigan, the Wildcats likely will be hard-pressed to make it to a bowl.

This is encouraging for Minnesota hoops: The great Ken Pomeroy projects the Gophers at No. 37 in the nation.

This could be a sleeper team in the Big Ten.