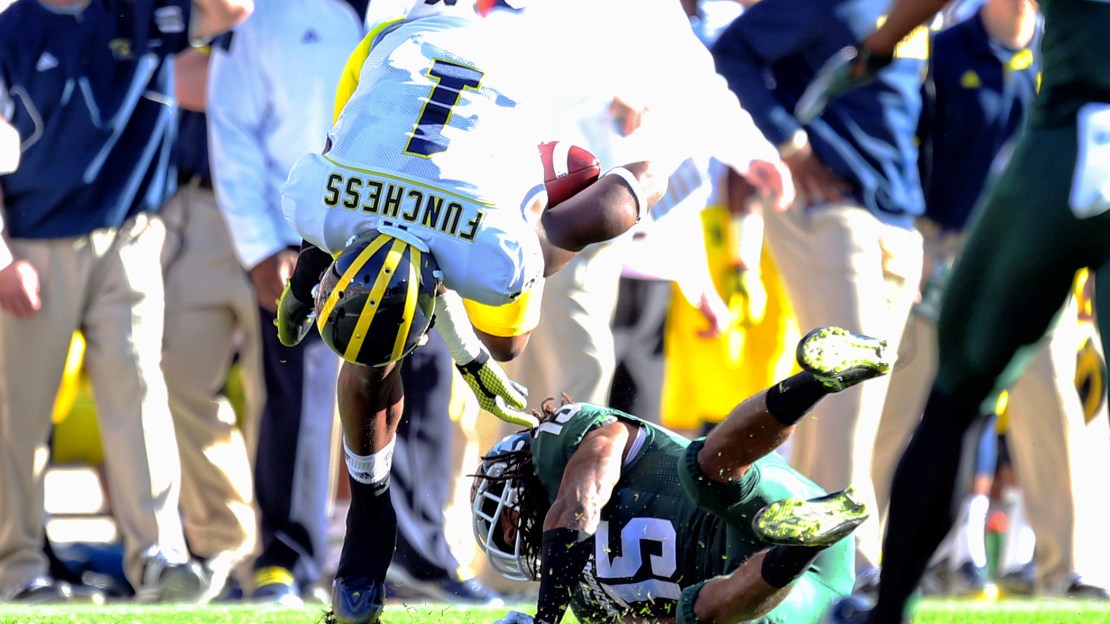 Another Saturday, another loss for Michigan, which fell hard at Michigan State. Give Wolverines coach Brady Hoke credit: He?s taking the blame for the tough season.

"I have to do a better job," Hoke said the loss to MSU dropped him to 0-7 all-time on the road against the Michigan?s rivals. "I'm accountable. That's how I feel."

Nick Baumgardner notes that Michigan was brutalized in every facet again Saturday afternoon, racking up just 186 yards of total offense while Michigan State rumbled its way to 446. The Wolverines stoked the ire of MSU by planting a stake in the field prior to the game. Hoke later apologized. Put that misstep on the pile with all of the others this season for Michigan.

Matt Hayes of the Sporting News notes that Michigan State coach Mark Dantonio was pretty honked off by Michigan's actions.

You think Dantonio is still ticked off about Hart?s Little Brother comment? Wait and see how long this one sticks in his craw.

?No, no; it?s not funny,? Dantonio said after telling Michigan to shove it - I mean, where it got shoved. ?We felt like we needed to make a statement.?

Was Illinois? win over Minnesota-the Illini?s first home Big Ten win since 2011-the biggest of Tim Beckman?s Illinois tenure? Matt Daniels of the Champaign News-Gazette thinks so. And so do I.

And there still are some winnable games on the schedule for the 4-4 Illini. This team could still go bowling, people.

The lllini?s joy is Minnesota?s misery, as the loss was a massive dose of reality for the Golden Gophers. The four-game winning streak? Over. Big Ten West title hopes? Damaged. Now, the schedule gets appreciably more difficult.

Nice win for Nebraska over Rutgers. But the Cornhuskers aren?t satisfied.

"Well we got the win. I'm happy about that. That's about all I'm happy about," head coach Bo Pelini said on Saturday. "I thought we were sloppy, inconsistent and we didn't play at the standard we needed to. I'll take the win. Anytime you win a football game, it's never easy to win. But I have higher standards than what I watched out there today."

This team wants to get to Indianapolis for the Big Ten title game. And, it?s on course.

It wasn?t pretty on Saturday night for Ohio State, but the Buckeyes got a win in double overtime vs. Penn State. The offensive line seemed to take a step back, but you have to know: The Nittany Lions have one of the best defenses in the Big Ten.

"They outplayed us up front, I think," Urban Meyer said. "I was a little upset with the way we played up front and we've got to get that fixed. That has always been a strength of Ohio State football and has been for quite a while. Without making too big of a deal of it, we need to evaluate that and play better as we hit the stretch run here."

Special seasons also include a few close calls along the way. I wouldn?t be alarmed, OSU fans. The Buckeyes found a way to win. This could be a galvanizing victory.

It has been a tough couple of games for Rutgers, falling big-time at Ohio State and at Nebraska. Now comes a visit from Wisconsin. If the defense doesn?t get better, the bleeding will continue.

Steve Politi of NJ.com notes that Rutgers has given up 98 points and 1,040 yards the past two weeks, with tackling an issue in both losses. You wonder: Can this defense rebound to save the season? Or will the grind of playing these physical Big Ten teams wear it down before games against Indiana and Maryland that could decide if this team gets to a bowl game?

The great Tom Oates of Madison.com is as impressed with Wisconsin?s defense, as I am. Check out this video.

If the offense can maintain balance, this will be a very tough team to beat down the stretch.