What did Tom Dienhart learn about Big Ten in Week 9? Here's what! 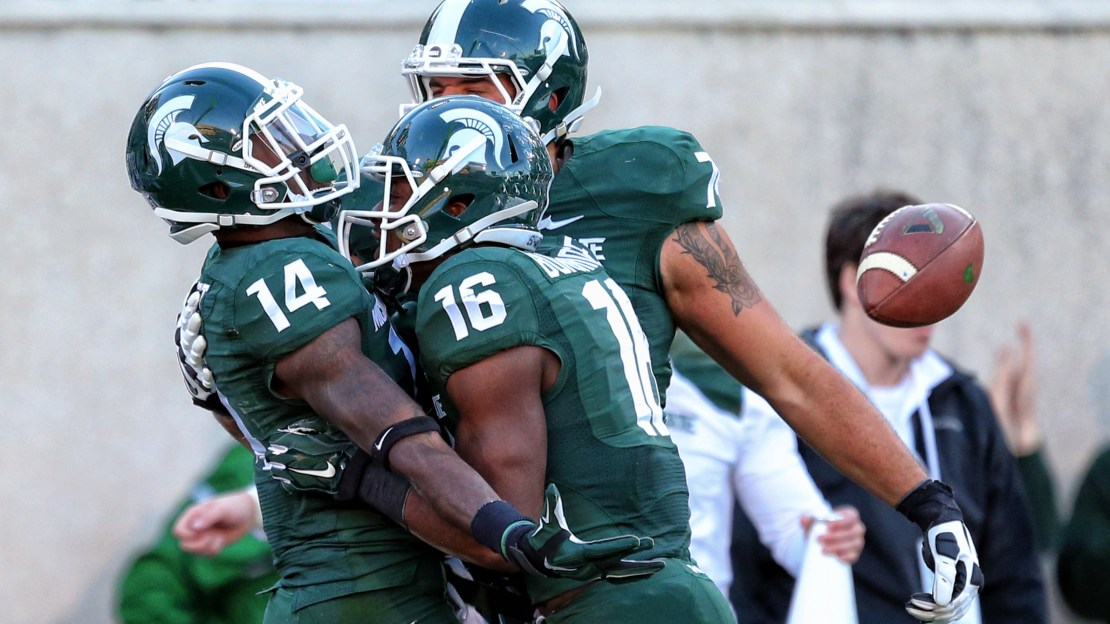 Michigan State rolls on. So does Ohio State. Can Nov. 8-the date they meet in East Lansing–get here already? Here?s what I learned on Saturday.

1. Great teams always have to scratch out a few tougher-than-expected wins during the course of a tough season. And that?s what Ohio State did at Penn State, pulling out a double-overtime win. The Buckeyes did what they were supposed to do vs. an inferior Penn State team: They won. The progress of the offensive line since the loss to Virginia Tech has been remarkable. OSU has a nice rotation at wideout and Ezekiel Elliott continues to come on at running back. A killer line continues to set the tone for a defense that?s coming on, with stud end Joey Bosa punctuating the Penn State with a sack.

3. The Nittany Lions may have a chance to flip the script in their next four games. Losers of three straight, Penn State faces Maryland, Indiana, Temple and Illinois in the next four weeks. PSU needs to taste some success. It will be interesting to see how the Nittany Lions respond coming off that gut-wrenching double OT loss vs. Ohio State. Sometimes narrow defeats like that are more difficult to overcome than blowout losses.

4. Trying to decide who is the best player in the Big Ten is a vexing exercise. The top contenders appear to be Indiana?s Tevin Coleman (who was off), Nebraska?s Ameer Abdullah and Ohio State?s J.T. Barrett. Abdullah looked like the best on Saturday, setting a school single-game record with 341 all-purpose yards. He ran for over 200 yards for the fourth time this season and fifth time in his career.

5. The Nebraska at Wisconsin game on Nov. 15 is shaping up as the de facto Big Ten West championship game. Yes, Iowa and Minnesota also have just one loss in conference play like the Cornhuskers and Badgers. But Nebraska and Wisconsin are playing the best of any teams in the West. And they also have the most talent. In case you forgot, the Cornhuskers were embarrassed 48-17 in their last trip to Madison in 2011.

6. Wisconsin?s defense deserves some respect. The unit entered Saturday No. 2 in the Big Ten in total defense (286.0 ypg) and No. 2 in scoring defense (17.7 ppg). Coordinator Dave Aranda?s 3-4 scheme is built on speed and athletic ability. And the unit swarmed Maryland, limiting the Terps to 175 yards of offense with just 46 coming on the ground (1.6 ypc). Wisconsin led 52-0 before Maryland scored in the final minute. If the Badger offense can keep developing, this will be a very tough team to beat in November.

7. Illinois has life! What a gutsy win for the Fighting Illini, who pulled out a 28-24 comeback victory vs. a white-hot Minnesota team. The maligned Illinois defense delivered the key play, scoring the game-winning touchdown on a fumble return by V?Angelo Bentley in the fourth quarter. The 4-4 Illini need two more wins for bowl eligibility. After next week?s trip to Ohio State, the last three games for Illinois all could be winnable: Iowa; Penn State; at Northwestern.

8. Minnesota?s dreams of winning the Big Ten West may be ruined. The loss at Illinois is a painful one and it snapped a four-game winning streak for Jerry Kill?s crew. The 6-2 Golden Gophers are off next week. Then, they finish the season with arguably the toughest four games of any Big Ten team: Iowa; Ohio State; at Nebraska; at Wisconsin. Could the Gophers end up 7-5? Or 6-6?

9. Maryland and Rutgers aren?t ready to battle the elite of the conference. No shame in that. Rutgers has lost its last two games, at Ohio State and at Nebraska, by a combined score of 98-41. Maryland has gotten whacked by Ohio State (52-24) and Wisconsin (52-7) this season. And both schools still have to play Michigan State.

10. Michigan's defense continues to carry its weight, for the most part. The unit has played hard in every game this season, entering Saturday ranked No. 4 in the conference (301.0 ypg). The line is deep and the linebackers can cover ground, which is why the run defense was second in the Big Ten (93.6 ypg) entering the MSU game. And it actually produced some turnovers vs. Michigan State, recovering its first fumble of the season en route to generating two turnovers. The Wolverines entered the day with just three turnovers forced in 2014.