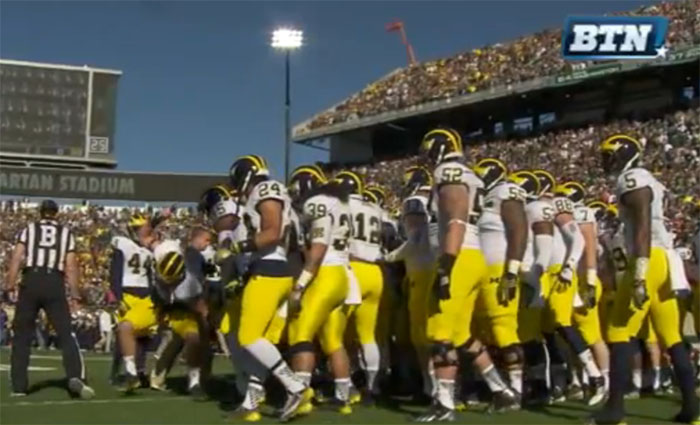 Mark Dantonio is tired of being disrespected by rival Michigan. He let it be known following Saturday's 35-11 win over the Wolverines, the Spartans sixth victory in the last seven meetings.

Dantonio wasn't pleased that Michigan planted a stake on his team's field prior to the game. So much so, the coach had a creative way of describing why Michigan State went for a touchdown leading 28-11 with 28 seconds left.

"(I) just felt like we needed to put a stake in them at that point," Dantonio said.

See what he did there? Of course you do.

Dantonio had more to say about his rival, which he is 6-2 against.

"You might as well just come out and say what you're feeling at some point in time," Dantonio said, "because you can only be diplomatic for so long. "OK? The Little Brother stuff, all the disrespect, it didn't have to go in that direction. We try to handle ourselves with composure. It doesn't come from the coach, it comes from the program. And, you know, throwing the stake down in our backyard out here and coming out there like they're all that, it got shoved the last minute and a half. We were not going to pull off that."

These words should only add more fuel to an already fierce rivalry.

The two rivals – the bands, to be more precise – put aside the rivalry following the game to combine on a terrific tribute. Check it out below.

Cool as hell. Bigger than football. Both bands. #ChadTough pic.twitter.com/NgZZhxKxIo