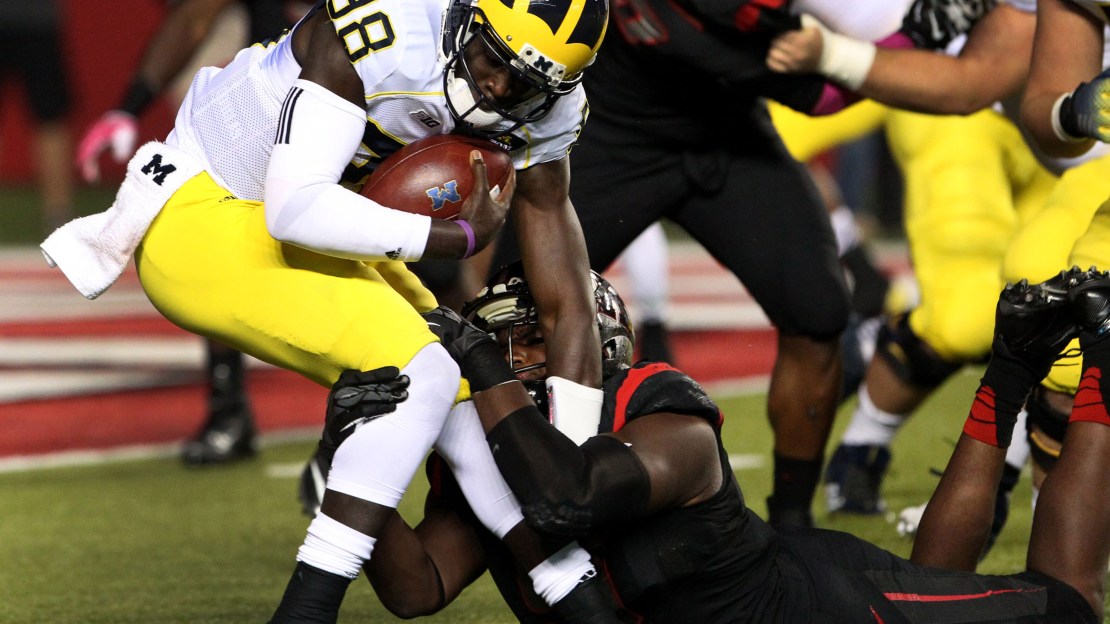 So, Brady Hoke says Michigan?s offensive line had some ?deer in the headlights? looks last year vs. Michigan State. I can believe that. Michigan quarterback Devin Gardner was sacked seven times for a total of -49 yards vs. MSU in 2013. As a team, Michigan recorded a minus-48-yard rushing stat on the day, the worst performance in school history.

The interior of the front– then true freshman Kyle Bosch, then redshirt freshman Erik Magnuson and then sophomore Graham Glasgow — that seemed to struggle the most. Nick Baumgardner of Mlive.com says communication fell apart, and fundamentals went out the window. And the result? Well it was easy to see why a 29-6 loss in East Lansing happened. I just wonder if things will be much different on Saturday.

Interesting take here from Bill Landis of Cleveland.com, who thinks that with one run, J.T. Barrett showed why he?s Urban Meyer?s ideal QB.

The play? It was a 33-yard touchdown run against Rutgers that affirmed Meyer's belief in Barrett. The Scarlet Knights sniffed out a screen, but instead of panicking or making an ill-advised throw, Barrett tucked it and ran straight ahead. No jukes, no spins, just the presence of mind to get out of trouble. How good is this guy gonna be? Let the Barrett vs. Braxton Miller debate rage.

Play-action passes have been an integral part of new offensive coordinator Ralph Friedgen's system, according to Dan Duggan of NJ.com. Nova has executed the fakes effectively and used them to hit on deep balls. The result: Nova is third nationally in yards per attempt (10.1 yards) and yards per completion (16.3 yards).

Good story from David Woods of IndyStar.com on Indiana freshman QB Zander Diamont, who is the son of a star from the old TV show the ?Bold and Beautiful.? You can?t make up stuff like this.

People ask me all the time about the Big Ten?s chances to land a playoff teams. Yes, America, there?s still a good chance it will happen.

As Andrew Logue of the Des Moines Register points out, there wasn't much talk about the Big Ten sending a representative to the first College Football Playoff after Mark Dantonio's Spartans and Urban Meyer's Ohio State squad suffered early losses. But the landscape has changed quite a bit since then-and figures to some more. Just sit tight.

Brian Christopherson of the Lincoln Journal Star wonders if it?s realistic to expect Nebraska to win its last five games. I think it is.

Check it out: Rutgers; Purdue; at Wisconsin; Minnesota; at Iowa. I wouldn?t be shocked if the Huskers are favored in each game.

Penn State is at a pivotal moment in its season. After opening 4-0, the Nittany Lions have lost two in a row. And things look challenging for a team with a listing offense and thin roster.

The team had a players-only meeting. And the captains met with James Franklin. It?s about trying to get this squad on track.

"There was a good amount of guys that spoke," quarterback Christian Hackenberg said on a conference call with reporters Wednesday.

"It was good for us. I think it was good and I think we're moving in the right direction. A lot of us had to get some things off our chest, and that was good and establishing the expectations and doing everything we can to get the job done."

A nice look at the Minnesota basketball newcomers.

Richard Pitino's second recruiting class is relatively unheralded, but the coach is excited by its potential to immediately inject length, athleticism and defense.

A recap of a Big Ten-centric chat with Lee Barfknecht of Omaha.com.

But as Horns247 points out, it all depends on how far the recent overall push to financially reward student-athletes beyond scholarship winds up going. The Big Lead has more on that here.

That $10,000 would be split evenly, $5,000 apiece, between cost-of-attendance and payment for the university?s use of the athlete?s name and likeness – read more about that in this ESPN.com story from Ausgust. Cost-of-attendance is different among schools so there is no uniform figure set since schools gave themselves the ability to provide COA stipends.

Not good news from North Carolina, where bogus classes were set up to help athletes stay eligible.

A system of no-show classes was pushed by academic counselors for athletes, hatched and enabled by two sympathetic officials in a key department and employed by coaches eager to keep players eligible, the report on the new investigation into the long-running scandal said.