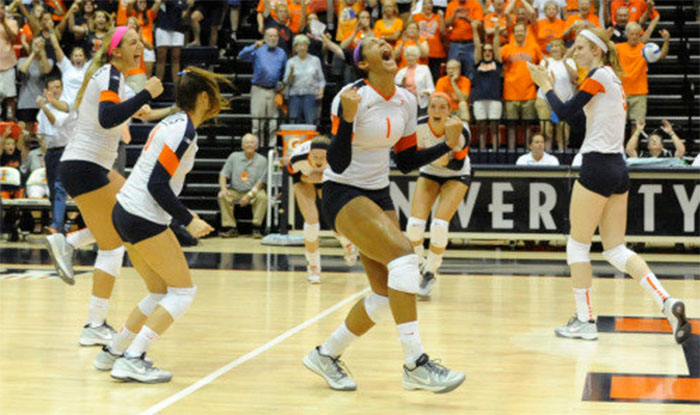 The week ahead has a plethora of excellent matchups that could reshape the Big Ten standings by the time Sunday evening rolls around. Four of those matches air on BTN, beginning Tuesday night. So, let?s get to it.

The first appearance of the Big Ten newcomers on BTN will allow one of these teams to finally put a "1" in the win column. It has not been an easy transition to the nation?s best volleyball conference for either team, and the results have revealed it. Both Maryland and Rutgers are 0-8 in league play and each team has struggled to win sets; the Terrapins have been swept in their last four matches, while the Scarlet Knights have not won a set in a Big Ten match.

The edge has to go to the Terps in this match due to the fact that they are at home and have shown at least some signs of life this year. Steve Aird?s team was two points from a shocking road upset at Northwestern and took sets from Indiana and Purdue in home matches earlier this month. However, the injury problems have continued to pop up for Maryland as kills leader Ashleigh Crutcher has missed the last three matches, and if she is not available this week, either team could claim its first Big Ten victory.

This is a pivotal week for the Gophers and Huskers. Minnesota has lost five of its last seven matches and was swept in four of those, while Nebraska has lost three of its last five, including two home defeats. These are two of the youngest teams in the conference and that has shown through with inconsistencies from match to match for both teams.

The Gophers were high-error against Wisconsin last week and have not had regular point production from anyone but Daly Santana. Adrianna Nora getting healthy would provide another option, but after a solid start, Sarah Wilhite?s numbers have come down. The lineup in the back row is shifting with Alyssa Goehner and Dalianliz Rosado switching positions midway through last Wednesday?s match with the Badgers and the passing has not being on target. Minnesota needs someone to step up both at the net and in the back row, otherwise not much may change.

Nebraska is still seeking more production from its middles and a reliable effort from the Rolfzen twins. Both Amber and Kadie have had tremendous matches this season but have also had nights where they have disappeared. Despite up-and-down production, the Huskers had their chances to beat Illinois at home, dropping two sets by the two-point margin with one of those going into extra points.

Without a Kelsey Robinson-esqe player in the lineup this season, Nebraska will need multiple players to get it done in clutch moments. Unlike other Big Ten teams, the Huskers cannot set one player over and over knowing eventually they will terminate. However, if there was a candidate for that role this season, Alicia Ostrander has been a reliable option. Ostrander has averaged 4.3 kills per set in the last three matches while hitting .364. The former walk-on has been a huge boost in the second left side spot in just her first season as a regular starter.

Wednesday?s match will come down to which team made strides in its consistency. Nebraska appears to be further along than Minnesota, but this match will be up for grabs.

What a difference a healthy team can make for the Wolverines. Though clearly not back to 100 percent, the return of Lexi Dannemiller, combined with the emergence of Adeja Lambert and progress of Abby Cole, has led Michigan to a four-match winning streak after a 1-3 start to Big Ten play. Cole earned her second consecutive Big Ten Player of the Week award after recording 5.5 kills per set and an astounding .617 hitting percentage against Rutgers and Maryland last weekend. Add in Caroline Knop continuing to find ways to score and the lineup change from a few weeks ago paying off, and Michigan has looked like a different team.

After playing three of their last four matches against the winless Big Ten squads, the Wolverines head to Happy Valley. The victory over Nebraska was tremendous, but a win on the road against Penn State would solidify Michigan as a team to be feared for the remainder of the Big Ten season.

The Nittany Lions may have finally found the emotion they were looking for in West Lafayette on Friday night. Following an underwhelming performance against Northwestern and a rare home loss to Illinois, head coach Russ Rose said he felt the team lacked emotion and leadership. Haleigh Washington may be just a freshman, but the nation?s top recruit displayed both of those qualities in the five-set win against Purdue. Washington was animated after every point she recorded and even had words for her teammates in the huddle during crucial moments of the match. Washington finished with nine kills and eight blocks, and her teammates finally executed in big moments to help Penn State avoid back-to-back losses for the first time since 2011. Aiyana Whitney has come in to her own as the Nittany Lions go-to hitter on the right or left side and despite struggling to start the match, Megan Courtney passed well and had some clutch swings down the stretch against the Boilermakers.

An improving Penn State block will be challenged by Cole, but if Micha Hancock?s serve is on and she can get numerous attackers involved, Michigan will need its other hitters to step up Friday night.

A lot will change in the Big Ten standings this week, but there is no doubt this match is a battle for the top spot.

Illinois has an abundance of confidence following wins at Penn State and at Nebraska, with a five-set win over Iowa in the middle, leaving the Illini just one match out of first place. If it were not for a 14-10 comeback by Ohio State on Oct. 8, it would be a three-way tie atop the Big Ten standings between Illinois, Purdue and Wisconsin.

After switching to a 5-1, with Alexis Viliunas running the attack as Illinois? primary setter, the Illini are 3-0, including the aforementioned wins over the traditional Big Ten powers. Kevin Hambly?s team has had three players in double-figures in each of those matches and the balanced attack has been too much to stop for opponents. Jocelynn Birks and Liz McMahon have been consistently putting up big numbers this year, but if Morganne Criswell keeps up her recent pace (17 kills at Iowa and 21 kills at Nebraska), the Illini are going to provide matchup nightmares for the remainder of the year.

Purdue proved this past weekend that it will be a contender for the rest of the Big Ten season. The Boilers looked better than the Nittany Lions for a good portion of their match, and if not for a few questionable calls, Purdue may still be unbeaten in conference play. The Boilermakers followed up the loss with an impressive win against an Ohio State team that had been the hottest in the league coming into that match. Dave Shondell?s team showed off exceptional defense in both matches and Annie Drews is making her case for the Big Ten?s top outside hitter with back-to-back 20 kill performances.

It is not often that you can say with certainty that this will be a great match, but the fans at Huff Hall should be in for a treat on Saturday. Both teams have numerous weapons, great defensive players and top quality setters, so it is difficult to give an advantage to one side. The matchup to look for would be late in sets when Purdue needs a point. The Illini know the set will go to Annie Drews but can they stop her? If Illinois is up to the task, who else can come through with the crucial swings for the Boilers? Sam Epenesa is a solid option after 17 kills against Penn State and 12 against Ohio State. It will be an even match with tremendous play on both sides of the net. Saturday in Champaign is must-see stuff.

As for the atmosphere, Huff Hall and Holloway Gymnasium may not have the largest crowds in the Big Ten but they have the most intense ones. The Illini?s Spike Squad and the Boiler?s Block Party provide the two best student sections in the nation and have made opponents wilt under the pressure time after time. Both provide incessant noise that could be credited for its own fair share of points and unique characters meant to distract and confuse the players that have to execute in front of them. The past few years have been great to witness as the enthusiasm and dedication of these two groups has continued to grow.

Saturday both student sections will be in attendance in Champaign and should provide one of the most memorable atmospheres of the Big Ten season. The Illini will have the edge with it being a home match for the Spike Squad but it will be interesting see how big of a group the Block Party brings for the road trip.

Over the past few years the Spike Squad has developed a large travel contingent that makes the journey not just to matches in the near vicinity to Champaign but all over the Big Ten map. It is because of this dedication on the road and at Huff Hall that the Spike Squad is the premiere student section in the nation. The Block Party will have its chance to show off its own travel dedication on Saturday and will need to pull off a similar, though not identical, feat if they hope to unseat the Spike Squad.