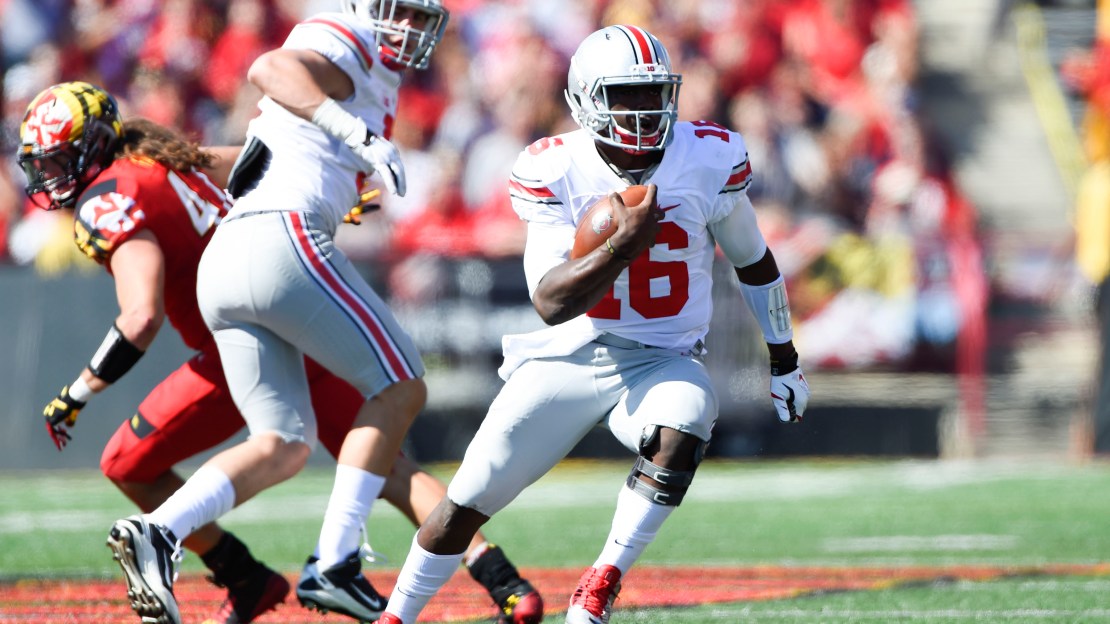 You may not have realized this, but the 2014 Ohio State offense is the highest-scoring in school annals.

The Buckeyes are averaging 46.5 points, scoring over 50 in each of the last four games. That moved the 2014 Buckeyes ahead of the 2013 Buckeyes, who averaged 45.5 points a game. OSU will face a stout Penn State defense this week that is No. 1 in the Big Ten in scoring (15.2 ppg).

And a date at Michigan State will be another nice test for this Buckeye attack, which has taken off under redshirt freshman QB J.T. Barrett, who isn?t satisfied with his progress even though he?s No. 1 in the Big Ten in passing efficiency and has 17 TD passes with just one pick in the last four games.

Ohio State?s trip to Penn State will be a homecoming for defensive line coach Larry Johnson, who spent 18 years in State College.

He?ll come ?home? with perhaps the best d-line in the Big Ten. How will a struggling Penn State offensive line block the likes of Michael Bennett and Co.? This could get ugly. But, Larry probably won?t mind.

?I left on my terms,? he said. ?And that?s the good thing about it. I left on my terms and I felt it was time to move on. Coach Franklin brought his staff in and I didn?t want to be a guy who would be held over again. So, I felt the best thing for me to do was to move on.?

Michigan must return to the scene of the crime when it travels to Michigan State, where it got mauled by the Spartans last year. It was a day Devin Gardner would just as soon forget.

Gardner was sacked seven times for minus-49 yards in last year?s 29-6 loss at MSU. His rushing numbers since that day haven't been strong, as he's rushed for 40 yards just once in the 12 games that have followed.

Here is a nice look at the Michigan-Michigan State series by the numbers.

Lloyd Carr led the Wolverines on a six-game win streak from 2002-2007 and Mark Dantonio has won five of six against Michigan since 2008.

Rutgers? blowout loss at Ohio State showed how much the program needs to amp up its recruiting efforts to procure better talent.

"Personnel-wise, I think they were the best team," Milewski said. "We knew that going in. It wasn't a surprise when we were on the field. It's not like we got shocked that they were a good team. It's just a matter of we didn't execute the game plan that we had and when the margin of error is so small then they take advantage of you."

Northwestern QB Trevor Siemian is ?not even close to being 100 percent,? according to Pat Fitzgerald. And, that?s not good. His lack of mobility is holding back a struggling Wildcat offense.

After totaling 262 yards in the first half vs. Nebraska last week, the NU offense gained just 28 in the second half. And Siemian, who completed only 5 of 16 second-half passes for just 25 yards, was the biggest reason for that. How long can NU stay with a gimpy Siemian?

Illinois finds itself in a familiar situation, according to Loren Tate of the Champaign News-Gazette. But it can reverse its fortunes. Mike White did it once in the 1980s. Tate caught up with ex-Illinois coach. Lots of good memories.

?Nobody knew who we were,? White said. ?We caught people off guard with our passing game, but we were soft on defense in the beginning. We had to adjust. We began to strengthen our running game, and we hit more in practice. At the time, there weren?t the limitations on practice, nor the exaggeration on concussions.

?We engaged in a lot more contact in those days. Coaches today are afraid of overdoing it. But you can?t learn to play defense unless you work at it. Tackling is a lost art.?

Can Illinois get back to the levels White achieved? Sure it can.

Gregg Doyel has taken over as the columnist at the Indianapolis Star. And he offers an always-edgy take. Here?s one on why Indiana?s Tevin Coleman has no shot to win the Heisman.

No big shock. In fact, it would be a huge upset if Coleman can even make it to New York as a finalist.

Everyone in life needs some perspective. And that?s just what Michigan State?s Tom Izzo got from Fran McCaffery?s family.

McCaffery?s 14-year-old son has been battling cancer. He news is good. But the struggles of the McCaffery clan made an impact on Izzo.

"There's a guilt level that coaches feel … none of us give our families what they deserve," Izzo said. "We really don't. If I recruited a kid and told him I'm gonna treat him like my son, if he really knew he wouldn't come. Because I don't get to spend as much time with my son as I do my team. And I'm not proud of that. I don't feel great about that. It's just the reality of my job."

The McCaffery situation has "helped me," Izzo said.

"Hopefully I'll deal with things a little bit better," he said. "Never to the point where I'll feel like my son and daughter got what they deserve, but give them a little more than maybe I give."