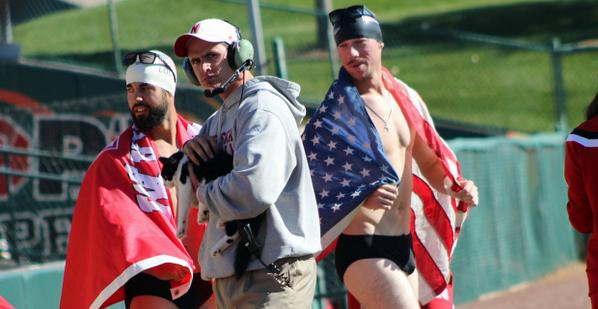 Don't tell the Nebraska baseball team that Halloween is still a week-plus away.

Decked out in Halloween costumes, the Cornhuskers closed out their annual Red-White Series on Tuesday. Like it matters, the Red Team won the game, 5-4, on a walk-off bases-loaded single to claim the series victory.

To more important and interesting matters, what costumes did the players wear? That's a great question. Let's consult head coach Darin Erstad's lineup card for the answers. Or, should I say Coach Chewbacca?

No need to check your eyes, either, because, yes, "Bo Pelini" hit third for the Red Team. "White Power Ranger" was the day's biggest star, however, as Nathan Chunn delivered the aforementioned walk-off knock.

I know you're wondering, and it was third baseman Blake Headley who dressed as Pelini. And, of course, Headley had @FauxPelini's cat.

Watch highlights from the Red-White series.

Check out the action from today! http://t.co/0mnT3eudK1

There are several other fantastic photos, too! Check them out below.

This is what a celebration looks like after a Teletubby goes yard. http://t.co/jFyq02rxF3 #Huskers pic.twitter.com/VGmqLkfMFz