Mitch Leidner Q&A: 'We are settling down and getting into the system' 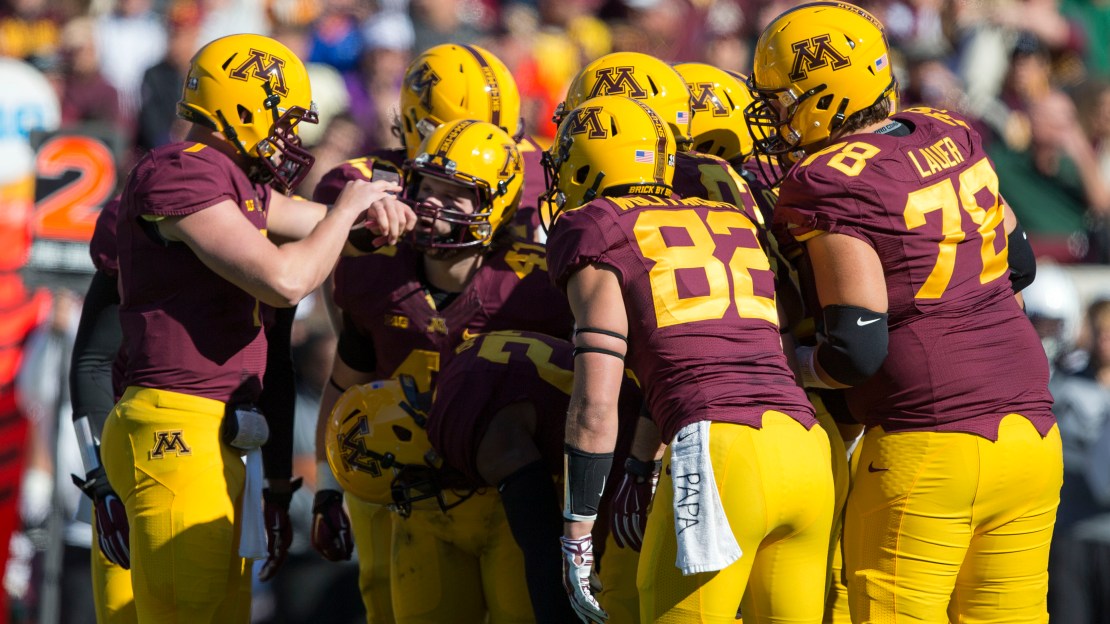 Every coach and player doesn?t want to look ahead. It?s all about staying in the moment. But if you are Minnesota, it?s difficult not to peek ahead at the possibilities. Could this team win the West?

If so, quarterback Mitch Leidner will have played a big part. He was thrust into the starting job after Philip Nelson transferred after last season. Leidner has thrived and continues to develop, battling through a knee injury this year and then a toe issue that caused him to miss the San Jose State game.

The 6-4, 237-pound sophomore from Lakeville, Minnesota, always has been a good runner. But could he pass well enough to keep defenses honest? Leidner is getting better each week after playing in 10 games and starting four in 2013.

The 6-1 Gophers are last in the Big Ten in passing (126.3 ypg), but Leidner has improved. He?s competing 54 percent of his passes for 847 yards, five touchdowns and five interceptions. He also has rushed 47 times for 161 yards and six touchdowns for the Gophers, who are 3-0 in the Big Ten for the first time since 1990 and 7-2 in their last nine league games. Since missing the San Jose State game, Leidner has completed 33-of-55 passes (66 percent) for 485 yards with three touchdowns and one pick.

Minnesota hasn?t won the Big Ten since sharing the crown in 1967 with Indiana and Purdue. It last went to the Rose Bowl after the 1960 season. Before dreaming that big, Leidner and the Gophers are focused on the West race.

I caught up with Leidner as he prepped for Minnesota?s game at Illinois.

Q: What has been the key to your starting to come together as a passer?
A: We are settling down and getting into the system here and learning what our strengths are as a team. The line is doing a good job and that has really helped open up the passing game the past few games. That has helped me get comfortable and go through my reads and progressions and be able to be successful throwing the ball.

Q: What was your mind-set going into halftime last week down 31-20 to Purdue?
A: Coach got us ready to go in the second half and told us what we needed to do. The guys came together and we believed we would go out there and win the game. We wanted to protect our house and didn?t want anyone to come in here and win on our turf. I didn?t even know Coach Kill never had won a game after trailing at halftime while at Minnesota. My mind-set was to go do my job the best I could. I knew my teammates would do the same.

Q: How special is tight end Maxx Williams?
A: He?s a great player. He has excellent hands and body control when he?s up in the air going after a ball. He?s tough for any linebacker or defensive back to cover because of his size and speed.

Q: What?s it mean to have David Cobb in the backfield?
A: It?s a good feeling to have a guy like that in the backfield. Being able to hand him the ball and know what?s going to happen. He can turn a small play into a big one. He has good vision and makes good cuts. He?s exciting to watch.

Q: What would it mean to lead Minnesota to a West Division title?
A: It would be huge for us and Coach Kill, the coaches and everyone in the state of Minnesota. We have our goals set for the season. To get there, we have to keep going one game at a time. And that?s what we?re doing now. We can?t look ahead at this point.

Q: You see your defense in practice. What impresses you?
A: Our secondary and middle linebacker Damien Wilson, who is an outstanding player with great speed. He?s a great player. But going against our secondary every day makes us better on offense and makes our receivers better. To see them against other teams and cause turnovers and get into the mind of other teams has been cool to see.