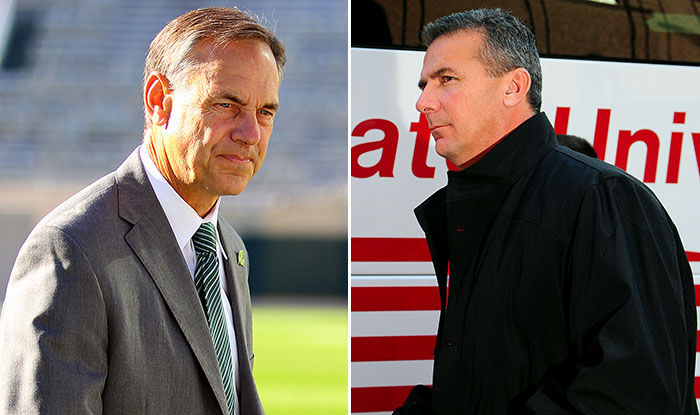 With each passing week as the wins get stacked on top of each other, the debate rages: Which team is better: Michigan State or Ohio State?

Each team is building an impressive resume as they chug toward a Titanic showdown on Nov. 8 in East Lansing for what looks like a de facto Big Ten East title game. A spot in the new four-team playoff also may be on the line.

To fuel the ?who?s greater debate?,? here are five reasons, in no particular order, why each can stake a claim to being the Big Ten?s best team.

Why Michigan State is the Big Ten?s best team.

2. Jeremy Langford. He was a workhorse last year, carrying 292 times for 1,422 yards with 18 TDs. And he?s coming on now. Langford carried 21 times for 109 yards and three touchdowns last week. It was the fourth 100-yard rushing game in a row for Langford, who is No. 5 in the Big Ten in rushing (94.9 ypg). He is the engine that can drive MSU back to big things, as the offense feeds off his production.

3. Connor Cook. Yes, Ohio State?s J.T. Barrett is playing well. Cook also is having a strong season. He?s hitting 61 percent of his passes for 1,641 yards with 16 TDs and four interceptions – numbers that could be better had Mark Dantonio not gone to reserves in a couple blowouts earlier this season. Cook also isn?t fazed by the big-game spotlight, winning MVP honors in the Big Ten title game and Rose Bowl last season. And he?s augmented by a talented receiving corps that may be the best in the league. Is there a better wideout than Tony Lippett? Nope.

4. Mark Dantonio. The guy is pretty good. He just coached his 100th game at Michigan State, and he has 70 wins. It doesn't take a mathematician to figure out that's a spiffy .700 winning percentage. He's also won 19 of his last 21 games, with the lone losses both coming on the road to ranked teams (No. 22 Notre Dame, 2013; No. 3 Oregon, 2014). No shame in that. Dantonio can flat-out coach, and he has a terrific staff, to boot.

5. Schedule. The Spartans get the Buckeyes at Spartan Stadium. That's huge. The atmosphere will be crazy for this prime-time battle, which is a rematch of last year's thrilling Big Ten title game. Also, after playing at Michigan State, the Buckeyes travel to Minnesota, which likely will be 4-0 in the Big Ten. Take away Ohio State, and Michigan's State's remaining schedule is a combined 5-7 in Big Ten play.

Why Ohio State is the Big Ten?s best team.

1. J.T. Barrett. He is playing better than any quarterback in the Big Ten. He?s No. 1 in the conference in passing efficiency, hitting 65 percent of his attempts for 1,615 yards with 20 touchdown tosses and only five interceptions. Is this guy really just a redshirt freshman? Barrett also is No. 1 in the league in total offense (333.0 ypg). He has been especially hot the last four games since the loss to Virginia Tech, notching 17 touchdown passes with just one interception.

3. Offense. Look, even if the Buckeye defense has some hiccups, this offense has the ability to cover it up-and then some. Coordinator Tom Herman?s attack comes at defenses in waves. Statistically, this is the best attack in Ohio State annals, averaging 46.5 points. The balance makes it deadly, as the Buckeyes average 259.8 yards on the ground and 274.0 yards passing. And you want weapons? Check out J.T. Barrett, Ezekiel Elliott, Michael Thomas, Dontre Wilson and Devin Smith, among others. This weaponry is fortified by a line that is coming on after breaking in four new starters.

4. Urban Meyer. You know all about the national titles, but did you know Meyer hasn't lost a single Big Ten regular-season game at Ohio State? Nope, in two-plus seasons, the Buckeyes are 18-0 under Meyer in Big Ten play, outscoring foes 771-428 during the streak.

5. Motivation. Ohio State was supposed to do what Michigan State did last season. It was the clear favorite to win the Big Ten and go to the Rose Bowl Game, and it looked like it would live up to the hype throughout the regular season. Alas, the Buckeyes lost to the Spartans in the Big Ten title game. Don't think for a second that any of the Buckeyes have forgotten about that early December game in Indianapolis. They're motivated to hoist the trophy this year, and there's no doubt that they'll be looking to exact revenge Nov. 8 at Spartan Stadium.