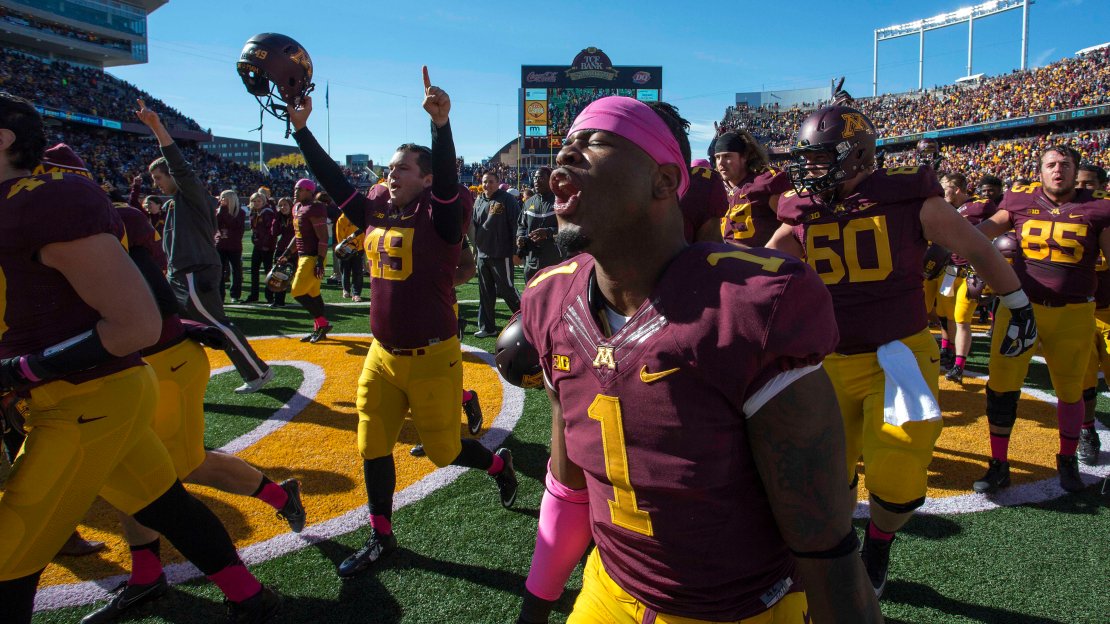 You have questions, and I have answers in my weekly Big Ten Mailbag. One thing is certain: You all can?t wait for that Ohio State at Michigan State game. Neither can I!

Do you think that Minnesota is for real? I personally think that November will hurt the Gophers greatly with Iowa then Ohio State then Nebraska then Wisconsin. – Jerry

No doubt. I think Minnesota dispatches Illinois this week. Then, things get VERY challenging for the Gophers, as you note. Lots of heavy-lifting in November for Jerry Kill?s crew. I just don?t think they have enough on offense to beat upper-level teams on a regular basis. But if Mitch Leidner keeps passing well to give this offense balance, Minnesota could win a couple of those game.

Who will win between Ohio state and Michigan State? – William

The teams meet on Nov. 8 in East Lansing. The Big Ten East title may not just be on the line-but a playoff berth also could be up for grabs. I still like the Spartans to protect their turf. I think their offense has more weapons. And I think the MSU defense is better overall than Ohio State?s.

What are the key matchups for the Ohio State at Michigan State game? – Nelson

Wow, the anticipation for this game continues to build! We still are a few weeks away from the meeting. There will be many key matchups. Here are just two. For MSU, can its offensive line handle the tremendous Buckeye d-line? Ohio State will need a big game from its running attack to keep the Spartan defense off balance.

With Nebraska beating Northwestern the way it did, is it the confidence boost the Cornhuskers need to make a run at the Big Ten title game? – Cliff

It certainly has to help the psyche of Nebraska to beat the Wildcats like they did. The Huskers took control in the second half, as Ameer Abdullah got ramped up and the defense pitched a shutout. This team is coming on. The offensive line rebounded from a tough game at Michigan State. And QB Tommy Armstrong continues to develop. Is the defense championship-caliber? We shall see in November.

In this season of crazy uniforms, have there been any classier than the Northwestern uniforms it wore vs. Nebraska? Old English writing and sharp helmets made those uniforms stand out. – Brian Salak

I raised this point a week or so ago and got shouted down like I was a heretic with three eyes. Look, Braxton Miller is good. The guy has won the last two Silver Footballs as Big Ten MVP. He?s a wondrous athlete. But Barrett may be even better. He?s a superior all-around quarterback who brings more to the passing game than Miller, who?s still more of runner/athlete than quarterback. I don?t care what anyone says. We saw him get muted by Michigan State in the Big Ten title game last year. Miller has to show he can make big passes in big moments-and not just rely on his feet in crunch situations. When things get tough and scheme breaks down, Miller?s first instinct is to run. And, with his injury history, that?s not good. If I'm Ohio State, I would start Barrett in 2015, assuming he continues to develop this fall.

Being a life-long Hawkeye, I am not an Ohio State fan. But it sure seems to me that J.T. Barrett is a really humble and down-to-earth kind of guy. – John

Yep. A great talent and fine young man. All sports can use more players who fit that profile.

Two things are happening at Northwestern:

Interesting points. The Wildcats do lack big-play ability on offense, often forcing NU to execute 10-, 11-play drives to score. That puts too much pressure on the offense to be perfect for too long. To wit: Northwestern is last in the Big Ten in scoring (20.9 ppg). Mark was especially dynamic. Freshman Justin Jackson is coming on at running back, but I?m not sure he possesses Mark?s explosion.

As for blowing halftime leads, the Wildcats have done so just once. NU led Nebraska, 17-14, at intermission last week, before succumbing. In Northwestern?s other losses, it was tied at half, 0-0, with Northern Illinois. And Cal led the Wildcats, 24-7, at intermission, as did Minnesota, 14-10.

Do you think there will be a rematch in the Big Ten championship game between Nebraska and Michigan State? Or do you foresee a different matchup? – Ryan Rush

I think we probably are headed to a rematch. The teams met Oct. 4 in East Lansing, with MSU taking a 27-22 victory. The Huskers have some big tests left, playing at Wisconsin and at Iowa while playing host to Minnesota. But I think Nebraska will find a way to win the crown. No other West team seems to possess a package of talent on par with the Huskers. But Iowa and Wisconsin have the more favorable schedules. In the East, MSU may be in more peril, needing to hold off fast-rising Ohio State. Bottom line: Anything but a Nebraska vs. Michigan State/Ohio State Big Ten title game will surprise me.

Why didn't Purdue's Raheem Mostert's (5 carries for 115 yards at 23 yards per carry) not make your list of outstanding players from Saturday? – Barry Marton

I probably should have included Mostert. The guy is one of the most exciting players in the Big Ten, and he showed it in limited, very limited, touches Saturday. But, I try to keep the list exclusive and always give players from winning teams the edge.