What did Tom Dienhart learn about Big Ten in Week 8? Here's what! 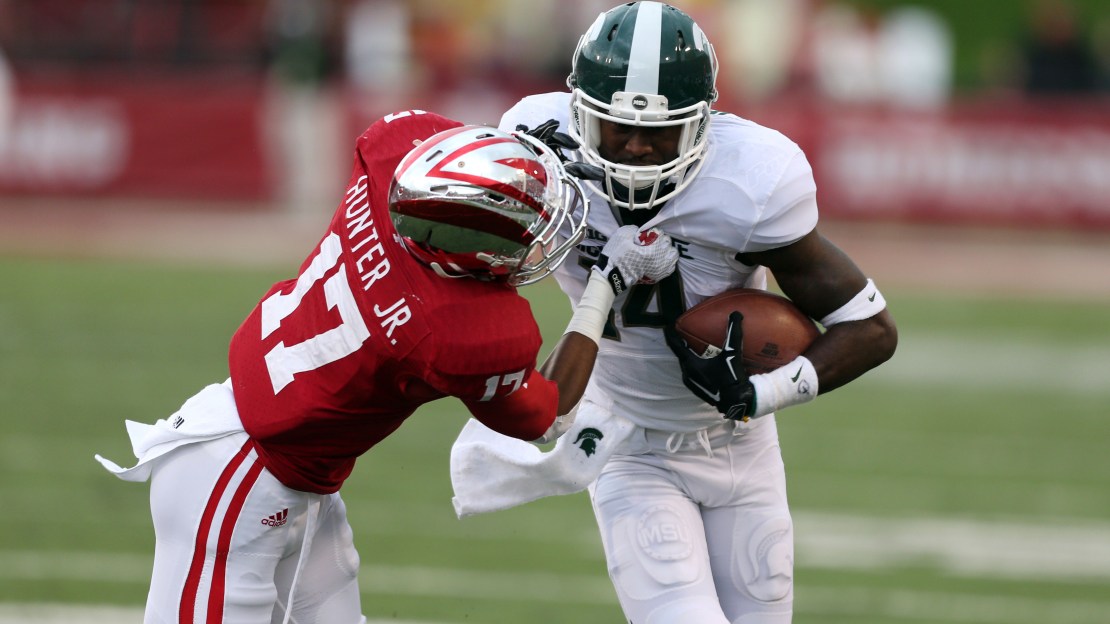 We learned so much on Saturday. Among other things: Ohio State continues to come on, and Nebraska and Minnesota may be the class of the West.

Here?s what I learned in Week 8.

1. Michigan State is still the Big Ten's best team. Yes, the Buckeyes are as hot as any Big Ten team, having ripped off four consecutive wins by a 224-69 margin. But the Spartans, last year's Big Ten and Rose Bowl champs, have won five straight and averaged 51.4 points since that loss at Oregon. The defense isn't as stout as it was the last two seasons, although it was encouraging to see the unit solve its recent fourth-quarter struggles Saturday at Indiana.

2. J.T. Barrett is absolutely silly. Every week, Barrett gets better and better. Pretty soon, if he isn't careful, he might play his way into the Heisman Trophy discussion. It might happen this week, actually. Consider this: In four games since the Virginia Tech loss, Barrett has thrown for 1,170 yards, 17 touchdowns and one interception, to go along with 263 yards and three scores on the ground.

3. There?s a bit of definition in the wild West Division. Nebraska and Minnesota pulled ahead of the pack. (Yes, Iowa is lurking, but it?s inconsistent.) The Gophers are 3-0 in the Big Ten. The Cornhuskers are 2-1, as is Iowa, and Wisconsin is 1-1. But many big games loom. Minnesota?s visit to Nebraska on Nov. 22 could end up being very big.

4. Maryland is the third-best team in the Big Ten East. That may not sound great, until you consider the top two teams are the best in the Big Ten and among the nation?s best-Michigan State and Ohio State. The Terrapins needed a nice win coming off a bye following a 52-24 loss at home to Ohio State. And, Maryland got it with a 38-31 homecoming triumph over Iowa. Could this team win nine games?

5. Iowa still has a quarterback controversy. After Jake Rudock torched Indiana last week, I  still wasn't sure Iowa was set at the quarterback position. Rudock looked uneven in Saturday's 38-31 loss at Maryland, and this offense continues to lack explosiveness, which makes it hard for the running game to have much success. How pedestrian is the offense? The Hawkeyes averaged 3.7 yards per rush and 9.9 yards per catch vs. the Terps.

6. Northwestern needs to develop more big-play ability on offense. The Wildcats lack offensive explosiveness, totaling only 290 yards vs. Nebraska. No pass play went for over 23 yards, as NU hasn?t scored over 20 points in each of its last three games. That said, freshman running back Justin Jackson is turning into a stud.

7. No doubt, Purdue has made great strides in Year Two under Darrell Hazell. The Boilermakers have gone from one win last year to three already in 2014. And the Boilermakers pushed Michigan State to the limit and lost a close one at Minnesota on Saturday. The difference? A suddenly scary offense. But the trend of third-quarter meltdowns is alarming, as Purdue has been outscored 85-38 immediately after halftime. Why isn?t this team ready after intermission? The Boilermakers saw a 31-20 halftime edge melt away in the Twin Cities, getting out scored 19-7 after intermission in a 39-38 loss.

8. Rutgers has no need to hang its head for losing 56-17 at Ohio State. This is a very good Buckeyes? squad that waylaid Maryland earlier this season and has now won 18 Big Ten regular-season games in a row. RU still has a solid team, but things won?t get much easier next week with a trip to Nebraska.

9. No team has worse luck at quarterback than Indiana. First, Cam Coffman and Tre Roberson transferred before the season started. Then, IU lost Nate Sudfeld (shoulder) and Chris Covington (ACL) to injuries at Iowa last week. That forced true freshman Zander Diamont to make his first start ever. And, he struggled by going 5-of-11 for 11 yards.

10. Indiana?s Tevin Coleman should be in the Heisman hunt. He?s a long, long, long shot and likely won?t even make it to New York for the ceremony. Too bad. The last time a player from a team with a losing record won the Heisman was Paul Hornung in 1956 for the 2-8 Irish. Against Michigan State on Saturday, Coleman ran for 132 yards to extend the nation?s longest active streak of consecutive 100-yard games to nine. Coleman was the first player to eclipse the 100-yard mark vs. MSU. But his streak of 15 games in a row with a rushing TD ended.