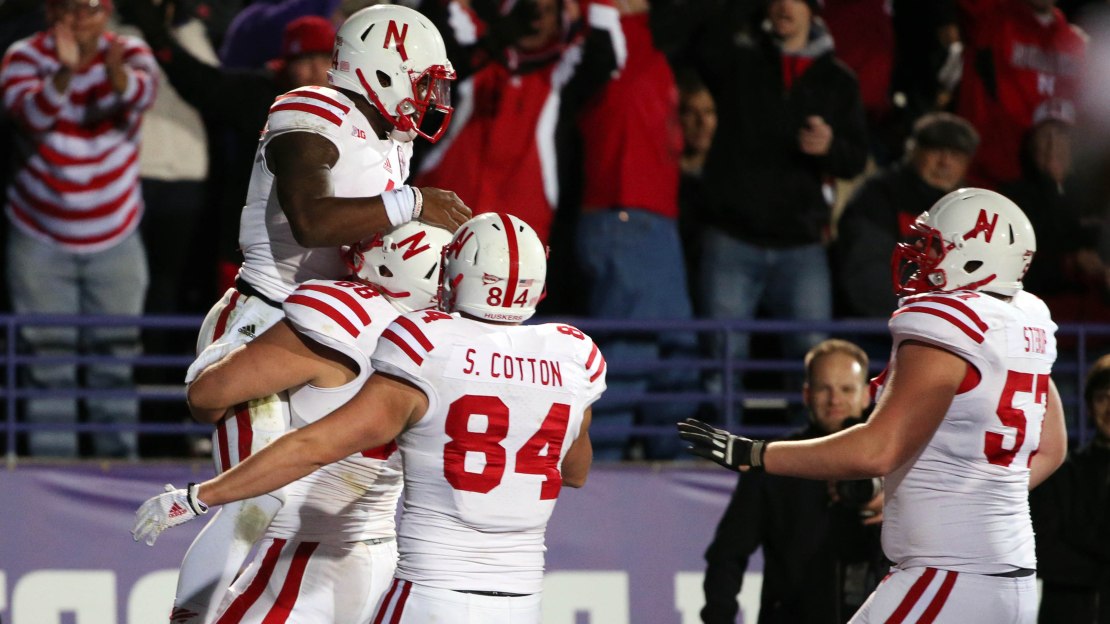 Another busy Saturday saw Michigan State and Ohio State reassert their dominance in the East, while Minnesota and Nebraska have shown some separation from the pack in the West.

Biggest disappointment: Northwestern. The Wildcats were coming off a tough loss at Minnesota and needed to rebound at home vs. Nebraska to stay in the West race. Alas, Northwestern lost, 38-17, to fall to 2-2 in the Big Ten. The Wildcats just lack offensive juice, totaling only 290 yards. No pass play went for over 23 yards, as NU hasn?t scored over 20 points in each of its last three games.

Play this again: The Purdue at Minnesota game was filled with thrills. The Boilermakers led, 31-20, at halftime. But the Gophers rallied in the second half, outscoring Purdue, 19-7, to notch a 39-38 win. The deciding points came on a booming 52-yard field goal by Ryan Santoso late in the fourth quarter. Then, the Gophers picked off a pass to kill Purdue?s last shot. It was the first time Minnesota rallied from a halftime hole to win under Jerry Kill.

Never play this again: The Rutgers at Ohio State never was competitive, as the Buckeyes took a 56-17 win in Columbus. It was 14-7 after one quarter and 35-7 at halftime. OSU dominated in every phase of the game in asserting its dominance. That strong RU defense that led the Big Ten in sacks? It had none vs. OSU.

Best play: We see Big Ten players make unbelievable plays every week. Rarely, if ever, do we see a head coach make a play worthy of inclusion on every highlight show across the nation. That's what Maryland coach Randy Edsall did, though, with his leaping catch of Jake Rudock's pass out of bounds. Watch it here! Incredible.

Ohio State. Since that confounding loss at home to Virginia Tech, the Buckeyes have ripped off four victories in a row and averaged 56 points in the process. Ohio State is gaining momentum as it steams toward a huge showdown game at Michigan State on Nov. 8.

Nebraska. The Huskers rebounded nicely from the loss at Michigan State with a dominating win at Northwestern. Visits from Rutgers and Purdue are next before a trip to Wisconsin. This team will be tough to stop.

Minnesota. That?s four wins in a row for the Golden Gophers. Minnesota?s 39-38 win over Purdue wasn?t pretty. But, who cares? The Gophers found a way to win amid adversity. A great gut-check victory for a program that continues to mature. Minnesota is 3-0 in Big Ten play for the first time since 1990. And its 7-2 in its last nine league games.

Iowa. The Hawkeyes saw their three-game winning streak end with a 38-31 loss at Maryland. And, honestly, it wasn?t that close. The Iowa offense struggled for consistency and it lacks big-play ability, averaging 3.7 yards per carry and 9.9 yards per catch vs. the Terps. Play in the trenches on both sides of the ball has been lacking.

Rutgers. The Scarlet Knights saw their three-game winning streak end in a 56-17 loss at Ohio State. It was Rutgers? worst loss in 12 years.

Northwestern. That?s two losses in a row for the Wildcats after they had ripped off three wins in succession. The offense?s lack of big-play ability hurts. You have can?t consistently execute 10- 11- 12-play drives to score. NU is off and then has a telling trip to Iowa on Nov. 1.

Michigan State QB Connor Cook. He completed 24-of-32 passes for 332 yards with three touchdowns and an interception in a 56-17 win at Indiana. The Spartans led just 28-17 at halftime but shut out the Hoosiers in the second half, 28-0, including 21-0 in the fourth quarter. So much for those fourth-quarter woes, huh?

Nebraska RB Ameer Abdullah. He had just 39 yards in the first half but then came on to finish with 146 yards rushing and a career-high four touchdowns.

Ameer Abdullah makes a 50-yard run for the @Huskers and gets stopped 1-yard short of the TD line. #DQFanFavorite http://t.co/Z9XxKQzHnf

Ohio State QB J.T. Barrett. The redshirt freshman continues to impress. He hit his first nine passes en route to completing 19-of-31 attempts for 261 yards and three touchdowns and led the team with 107 yards rushing on seven carries (15.3 ypc) with two touchdowns. Barrett has 17 touchdown passes with one interception in the last four games.

ICYMI: Evan Spencer hauled in the Catch of the Week in @OhioStAthletics win over Rutgers. #DQFanFavorite http://t.co/Eo3cLodyOd

Minnesota RB David Cobb. The Minnesota star rushed for 194 yards on 35 carries with a touchdown, proving to be an effective workhorse once again.

Minnesota DB Cedric Thompson. Thompson picked off two passes, with the second one serving as the game-sealer in Minnesota 39-38 comeback victory, and tallied six tackles.

It's safe to say that Cedric Thompson is having a monster day for @GopherFootball. Brought to you by @Buick. http://t.co/4OYw9Om1A2

56, passing attempts for Iowa QB Jake Rudock. He hit 32 for 317 yards with two touchdowns and an interception.

132, yards rushing for Indiana?s Tevin Coleman. He averaged 8.8 yards on 15 carries. That extended the nation?s longest active streak of consecutive 100-yard rushing games to nine. But his streak of 15 games in a row with a rushing TD ended. Coleman was the first player to eclipse the 100-yard mark vs. MSU.

128, yards rushing for Northwestern?s Justin Jackson. He is the first Big Ten freshman to eclipse the 100-yard rushing mark in three consecutive games since James White did it for Wisconsin in 2010.

2, interceptions for Minnesota?s Cedric Thompson vs. Purdue. His second one came late in the fourth quarter to ice a big win for the Gophers.

8, Big Ten road victories in a row for Michigan State, which ties a school record.

585, yards of offense for Ohio State vs. Rutgers. The Buckeyes had 324 of those yards rushing.

70, wins for Mark Dantonio at Michigan State. He also coached in his 100th game as Spartan boss on Saturday.