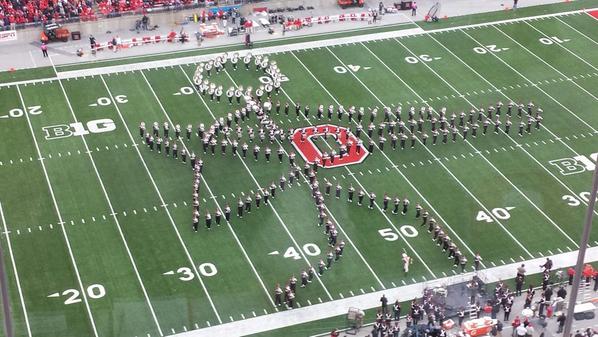 The Ohio State marching band is at it again. The Best Damn Band in the Land put on an impressive classic rock tribute at halftime of Saturday's game vs. Rutgers.

The performance included a tribute to the Rolling Stones, Kiss and Van Halen, among others. Basically, it was everything we've come to expect from the Ohio State band.

Ohio State leads Rutgers, 35-7, at the half, behind a pair of J.T. Barrett touchdown passes to Nick Vannett. Ezekiel Elliott and Rod Smith also ran for touchdowns, while Eli Apple returned a fumble for a score.

And get all of our Week 8 coverage.

It's all right man. In fact – it's a gas pic.twitter.com/OZ1dIdHTlI

Even Rutgers was impressed by the performance. Well, at least one beat writer was.

Honestly, the OSU band might make this trip worth it for Rutgers' fans. Halftime show is tremendous.

Pretty awesome to see Rutgers fans along with their band getting into #tbdbitl halftime show. They even clapped along with the fans.