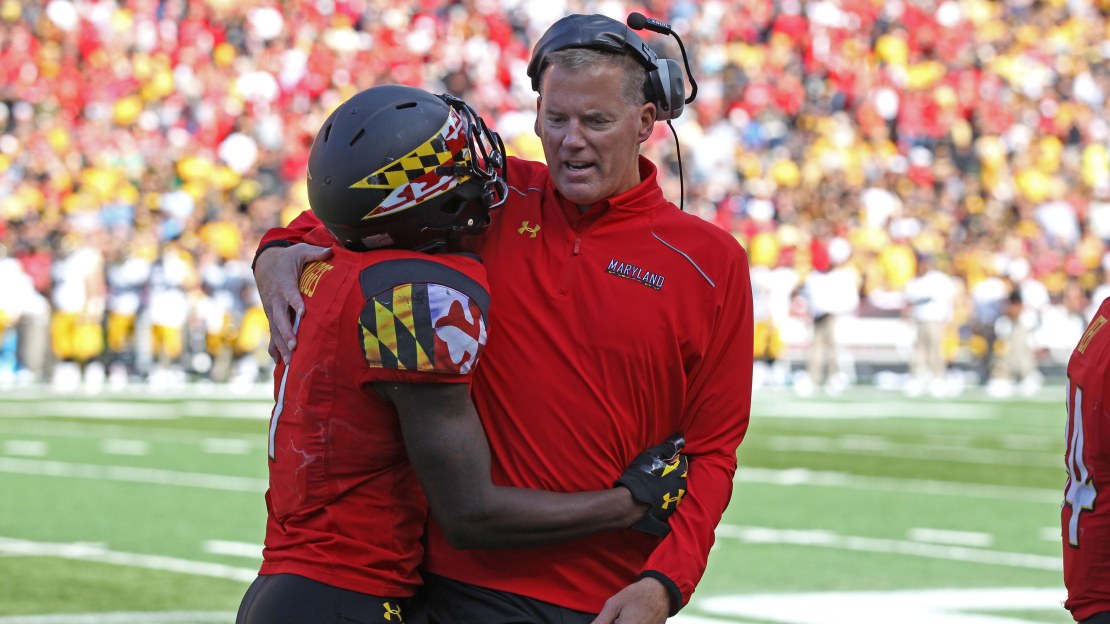 COLLEGE PARK, Md. — You could see the contentment on Randy Edsall?s face. He was pleased, happy and maybe even a little relieved to glow in the aftermath of this win over Iowa. Maryland needed this.

?The thing that I was very impressed with was the fact that we did it as a team,? Edsall said. ?All three phases contributed and did their end. ? They want to play hard for each other, they want to do it for each other; and when you have that, you get the results that you got today.?

This 38-31 victory was big for Edsall and Maryland. The Terrapins were off last week following a 52-24 home loss to Ohio State in which they were dominated. Which way was Maryland headed during its maiden Big Ten voyage? The Terps answered that query with an emphatic win over an Iowa team that had won three in a row in addition to four straight on the road and six of its last seven away from Iowa City.

?We just told them ?Guys, do your job, if you do your job we?re going to be just fine,? said Edsall. "That?s exactly what they did, they went out there and everybody took their assignment and executed it to the best of their ability. When you do that, we have enough talent to be able to play the way that we played. And really, that?s what it was. It was good to see that.?

Maryland is now 5-2 overall and 2-1 in the Big Ten. And it?s close to being 6-1 overall, if not for a 40-37 loss to West Virginia (which knocked off unbeaten Baylor on Saturday) that the Terrapins let get away in the end.

The next two weeks will be telling for the Terrapins. Up next are trips to Wisconsin and Penn State. Before the season, those games looked daunting. Now? Maryland may have a good shot to win them both. At the least, the Terps need to earn a split.

No, this team won?t likely win the Big Ten East. That honor figures to go to Michigan State or Ohio State, which meet Nov. 8 in what essentially figures to be a de facto Big Ten East title game in East Lansing. But Maryland looks like it has a good shot to finish third in this rugged division. And it?s not crazy to think that maybe the Terrapins can finish with eight wins-maybe nine.

The Maryland defense has been banged up, ranking No. 11 in the Big Ten in scoring (25.2 ppg) and No. 13 overall (451.2 ypg) entering Saturday. But the unit of coordinator Brian Stewart stepped up and muted an Iowa offense that arrived in Maryland with some mojo coming off a 45-29 win at Indiana. It was fitting that the Maryland defense essentially sealed the game when cornerback Will Likely intercepted a pass and returned it 45 yards for a touchdown early in the fourth quarter to give Maryland a 31-21 lead. He leads the Big Ten with four picks, with two going for touchdowns.

William Likely picks off the Iowa pass and turns it into a @umterps touchdown. #DQFanFavorite http://t.co/dSSukjSYro

?It gets back to the team concept,? said Edsall. ?Guys see things that happen during the game and the guys who have the abilities to make plays basically just do their job and make a couple moves here or there to make things happen.?

The Terps showed toughness and resiliency in this one, falling behind 14-0 in the first quarter before rallying. And when quarterback C.J. Brown was knocked from the game in third quarter, the Terps didn?t waver with Perry Hills taking over after it was announced before the game that backup Caleb Rowe was lost for the year with an ACL injury suffered in practice. Hills hadn?t played since 2012 but still led the team on a TD drive before Brown re-entered later. Just another bit of adversity to overcome. Maryland never flinched.

?It?s been a rollercoaster,? said Brown of the adversity the team has faced. ?At the same time, we?ve been through situations like this before. It always helps when you?re winning. To be able to come out here today, get the win and only come out with scratches and bruises is pretty good.?

Where does Iowa (5-2 overall; 2-1 Big Ten) go from here? A quarterback debate may begin anew as Iowa heads into a bye week. Jake Rudock was plagued by inconsistency, which has some wondering if C.J. Beathard should get another shot. He took over earlier this season for an injured Rudock and led Iowa to a win at Pitt. He subsequently engineered a victory at Purdue. With Rudock healthy, Iowa said it would use both quarterbacks. But Rudock worked most of the win at Indiana. And he went the distance today, hitting 32-of-56 passes for 317 yards with two touchdowns and a pick.

This team isn?t built to have the quarterback throw the ball 50 times. Iowa needs to get the running game going, as it generated just 116 yards today. But defenses are able to bunch up on the Hawkeyes, who struggle to stretch defenses with Rudock at the controls. Beathard provides a better down-field element, which loosens things for the running backs.

?If we think we can play like that and be successful, then we better change the schedule,? said Kirk Ferentz, who was displeased with his team?s seven penalties and inability to stop the run (212 yards allowed). ?Clearly, that?s not possible at this date, so we just have to coach better and play better.?

A visit from Northwestern is next. A loss to the Wildcats could be devastating for the Hawkeyes. The Wildcats have had the better of Iowa of late, going 10-7 vs. the Hawkeyes in the last 17 meetings. After that, there also are games remaining at Minnesota and vs. Wisconsin and Nebraska with a visit to Illinois mixed in. Long story short: Iowa may be at a tipping point.

Maryland, meanwhile, can feel good about itself.

?It was real big (win),? said Terps linebacker Yannik Cudjoe-Virgil. ?We had a chip on our shoulders coming into the game and we just executed and got the win. It was a real good feeling.?